This quiz will give you some terms in German that all relate to the Bundeswehr (German defense forces). You decide whether each term translates to a rank, a piece of equipment, a unit or something else.

Quiz Answer Key and Fun Facts
1. "Hauptmann" is which of the following?


Answer: The rank of army captain

The rank of "Hauptmann", literally translating to "main man" or "chief" is one of the oldest ranks in the history of German armed forces. Officers of this grade typically command a company or serve in staff functions. Although the word contains the stem "Mann"(meaning "man" as in male adult), it is used for both male and female officers - there is no such thing as a "Hauptfrau".
2. "Musterung" translates to which of these?


Answer: Something else: the medical examination of new recruits

Before any recruit, whether conscript or volunteer, can enlist in the armed forces, they will be subjected to a medical exam called "Musterung". This is conducted near the potential recruit's residence and any negative result is binding - the prospective soldier is not processed any further. All recruits also pass another medical during the first week of service.
3. A "Sturmgewehr" would be what?


Answer: A piece of equipment, namely an infantry rifle

The infantry rifle used in Germany was for many years the "Sturmgewehr G-3", now being replaced by the lighter and more accurate G-36 weapon. Similar to the M-16 in performance, the G-3 was a very robust weapon but required quite a lot of training to use proficiently.

A Private after basic training would be a "Gefreiter", with various prefixes indicating higher enlisted ranks equivalent to the former US specialist ranks.
4. An "Oberst" would be identified as which of these?


Answer: The rank of colonel

"Oberst", literally meaning "topmost", was the highest rank in German militia and army units of the middle ages and several centuries afterwards. The rank is equivalent to a Colonel and is often commander or deputy commander of a brigade (fewer than half of all brigades actually have a Brigadier General commanding). Reaching this rank is considered above average for a career officer, the standard retirement rank is "Oberstleutnant", meaning Lieutenant Colonel. An airbase is sometimes called a "Fliegerhorst" (alluding to an eagle's eyrie) which has some phonetic similarity to the word "Oberst".
5. Which of the following is a "Zug"?


Answer: A unit equivalent to an army platoon

A "Zug" is the typical platoon-size unit of infantry, light armored and support troops. Led by a Lieutenant or senior NCO, it typically has platoon size (20 to 50 soldiers). It is less independent in operations than its American counterpart. "Zug" can also mean a parade or train, which leads to many enlisted troops referring to their platoon commander as "Schaffner", a word play on "Zugführer" (the latter being the term for platoon commander, but both also words for a railway conductor).
6. What would be the best equivalent for a "Schiffchen?"


Answer: A piece of equipment, namely a cap

The word "Schiffchen" literally translates to "small ship" as this type of headwear, when held upside down, resembles a paper ship in size and shape. Unfortunately for many childish soldiers, "Schiffchen" are not suitable as toy boats as they have several small holes for ventilation which would make them leak.

A recruit in basic training would be referred to as "Schütze" or, informally with one of many mildly derogatory terms.
7. If someone mentioned a "Gruppe", it would be what?


Answer: A unit equivalent to an army troop

The German army actually has two terms for troop-level units, one being "Gruppe" (literally "group", typically having eight to twelve soldiers and led by a junior NCO) and the other being "Trupp" (two to five soldiers, typically led by an experienced Private).

The German word for a General is just "General" and Germany also uses the grades of Brigadier ("Brigadegeneral"), Major General ("Generalmajor") and Lieutenant General ("Generalleutnant").
8. "Einberufung" refers to which of the following?


Answer: Something else: the draft call

The act of "Einberufung" refers to the actual call that a prospective soldier is served, indicating the date, time and location to report for duty. It applies both to conscripts and volunteers and even those summoned for a reserve exercise receive this type of call.

The word "Ruf" (call) which is part of "Einberufung" is used in radio lingo, but no equipment uses it in its name in spite of some official terms for equipment being quite awkwardly composed of German words almost unheard in civilian life since the late 1940s. Currently, there is no conscription service in Germany - all armed forces service is voluntary - but the relevant laws are just indefinitely suspended and could quickly be reactivated if needed.
9. Which of these is a "Zapfenstreich"?


Answer: Something else: a military tattoo

"Zapfenstreich" does on the one hand refer to the military tattoo, usually a rather elaborate and rare ceremony (during my active service, I attended exactly one of them) but on the other hand also to a night call after which soldiers below a certain rank (usually just recruits, but by special order this can be extended to all non-commissioned staff if necessary) have to be in bed. Bayonets and similar sidearms are not used in Germany; the rank of Sergeant Major would be "Stabsfeldwebel".
10. Finally, which best describes a "Feldwebel"?


Answer: The rank of staff sergeant

The grade of "Feldwebel" is the basic grade for long-term and career NCOs. In Germany, the NCO career is separate from that of a basic enlisted soldier. NCO candidates reach the "Unteroffizier" (literally "sub-officer") rank after 12 months and then can go on to "Feldwebel" after four years of service. Like the Private rank of "Gefreiter", "Feldwebel" can be prefixed, in ascending order of rank, with "Ober-", "Haupt-", "Stabs-" and "Oberstabs-".

A field kitchen would be "Feldküche" - in Germany a specific type of equipment mounted on a trailer and capable of providing food for about 500 personnel.
Source: Author WesleyCrusher 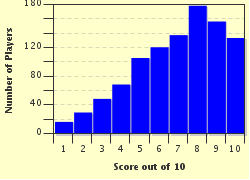