One of the best-selling cars of all time is the subject of this quiz. Buckle up and enjoy the ride!

Quiz Answer Key and Fun Facts
1. In what model year was the Ford Taurus introduced?

Model year 1986 was a critical one for Ford. With sales slipping and customer confidence flagging, the company put its chips on the Taurus to bring it back to prominence.
2. What mid-size car did the Taurus replace in Ford's lineup?

Midsized LTDs were offered in Ford's lineup from model years 1983-1986. Its relatives include the 70's vintage Galaxie 500 and the 90's super cruiser Crown Victoria.
3. The first-generation manual-transaxle variant of the Taurus was known by which trim designation?

The SHO was a high-powered, high-performance upgrade of the MT-5. Originally featuring a manual transaxle, the first automatic transaxle SHOs appeared in model year 1993. The SHO was aimed at aging baby boomers jaded by "boring" family cars.
5. What was the original name of the Taurus?

Sigma was the working code name of the Taurus program. At the time, it was also an active nameplate on a compact Mitsubishi sedan. Aerostar wound up as the nameplate for Ford's first minivan. Chevrolet took Lumina as the name for its own mid-sized sedan. And Starfire was the name of Oldsmobile's equivalent to the 70s-vintage Chevrolet Monza.
6. The Taurus was manufactured at Ford plants in two cities. Which two cities?

Two of Ford's oldest automotive plants had the responsibility for making one of the world's most popular cars.
7. When did the Taurus make its debut on the NASCAR Winston Cup circuit?

When Ford discontinued production of the modern Thunderbird and began reworking the type as a retro roadster, the Taurus was tapped as Ford's stock-car platform. Taurus remained on the circuit, which itself was renamed the NASCAR Nextel Cup, until the end of the 2005 season.
8. Which NASCAR driver drove the Taurus in its first stock-car victory?

Although Mark Martin was the first driver to win a Winston Cup race in the Taurus (the No. 6 Valvoline machine, to be specific) on March 1, 1998, at the Las Vegas 400, Rusty Wallace was at the wheel of the No. 2 Miller Lite Taurus when he won the Bud Shootout at Daytona on February 8, 1998. Even though the Shootout doesn't impact the point standings, it is a NASCAR event. (Thanks to #1ruddfan for additional information.)
9. What name was given to the Taurus's more upscale Mercury twin?

As a three-time Formula One champion, Stewart's feedback to Ford on the 1996 Taurus, the controversial oval-themed redesign of the type, provided valuable information to the designers.

Taurus would undergo one more major redesign for model year 2000, in which many of those oval elements were softened. The model year 2005 Taurus was the last sold to the general public in the United States. Ford replaced the sedan variant with the Five Hundred and the Fusion, and the station wagon variant with the Freestyle.
Source: Author cag1970

This quiz was reviewed by FunTrivia editor Bruyere before going online.
Any errors found in FunTrivia content are routinely corrected through our feedback system.
Most Recent Scores
Jan 25 2023 : NovaRacing: 9/10
Dec 21 2022 : Andyboy2021: 10/10 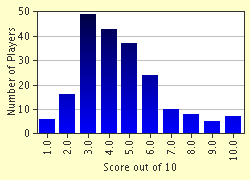