My Life in Cars Trivia Quiz

A brief rundown of all the cars that have been a part of my life.

Quiz Answer Key and Fun Facts
1. As a child growing up in Southern Indiana, the first car I remember my parents having was a green and white 1954 Mercury Monterey. It seemed to me we had that car forever (actually it was 12 years). Did Mercury ever sell pickup trucks, and if so, in what years?

They were built by Ford of Canada and looked exactly like their Ford counterparts.
2. The second car my parents owned was a white 1966 Chevrolet Impala 4-door hardtop with a 327 V8 engine. This car eventually became my first car. Prior to the 1966 model, the Impala was the top trim level for Chevy's full size car. What became the top trim level in the 1966 model year?

The trim levels (by increasing cost) were Biscayne, Bel Air, Impala, and Caprice.
3. The first car I bought was a silver and black 1972 Chevrolet Vega GT Hatchback Coupe. I liked the car but apparently the critics didn't. What size category was the Vega considered to be part of?

Automobile Magazine stated "Today the Vega is considered a symbol of all the problems Detroit faced in the 70's."
4. In 1976 I bought a silver Oldsmobile Cutlass Coupe with a 350 V8 engine and an automatic transmission. It was sharp. According to Dupont Inc., in the 2009 model year, what was the most popular color for all cars sold globally?

Silver - 25%, Black - 23%, White - 18%
5. 1979 rolled around and I purchased a Pontiac Grand Prix SJ Coupe. The color was called double two-tone black and silver. I still think it was the best looking car I ever owned. What year was the Grand Prix introduced as a Pontiac model?

The head of Advanced Engineering at Pontiac at the time, John DeLorean, was involved in developing both the Grand Prix and the GTO.
6. By 1983, I had 2 kids and needed something a little roomier and with 4-wheel drive. This was the first year for the Chevrolet S-10 Blazer, which I read about in "Car and Driver" magazine. I liked it so much I bought a black and silver one. What was the full-sized version of this truck called?

The GMC version of this truck was called the S-15 Jimmy.
7. I kept the Blazer until 1986 when we needed more room to haul the kids and their friends to various places. I looked around and decided to buy a silver and black 1986 Ford Aerostar minivan. It was ideal for family and friends. I liked it so much I traded it for a silver 1990 Aerostar minivan. What was the name of the minivan with which Ford eventually replaced the Aerostar?

The Windstar debuted in 1995 and production of the Aerostar stopped after the 1997 model year.
8. The kids grew up and our needs changed, so in 1994 we bought a green-gold Dodge Intrepid. It was the first Chrysler product I owned. It had the new cab forward design which made it handle and drive really well. Which of the following car models was similar to, and based on, the same platform as the Intrepid?

The Jeep/Eagle Division was formed after Chrysler's 1987 buyout of American Motors. The Vision was sold from 1993-1997.
9. I gave our youngest son the Intrepid in 1999 and purchased a 1996 Mercury Sable at that time. It was good reliable transportation, if not the best looking car. What was the car model that was basically the Sable's twin?

The wagon version of the Five Hundred was called the Freestyle.
Source: Author bockek01 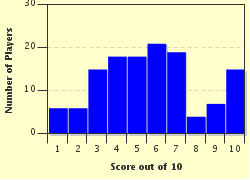 
Other Destinations
Explore Other Quizzes by bockek01