The VE Commodore was introduced in 2006, as an all-new model. See how much you know it. Covers Commodore, Statesman, Caprice and HSV.

Quiz Answer Key and Fun Facts
1. What is the name of the base model VE Commodore?

The VE Commodore Omega is, in fact, equivalent of a cross between VZ's Executive and Acclaim. XT is the name of the base model Ford Falcon, a rival car in Australia.
2. How many kilowatts does the Base V6 have?

The Alloytec 180, despite its name, has 175kW of power. The VZ Commodore also had 175kW, whilst the VZ Series II had 172kW, and the High Output V6 has 195kW.
3. Which one of the two-tier luxury models have leather seats?


Answer: Wheels Car of the Year

It beat the Toyota Aurion and BMW 3-Series Coupe to the Car of the Year Award. It also both Motor PCOTY and BFYB, but not in January 2007. The Toyota Aurion AT-X won Ausrralia's Best Family car.
5. What relationship does the SV6 and SS share?

The SV6 is a Commodore Omega with a sports-tuned suspension, bodykit and a premium V6 engine. The SS shares the same interior, but adds V8, a higher rear spoiler, and a higher price.
6. Which is the fastest car in the VE Commodore family (NOT including WM and HSV)?

Contrary to many people's belief, the Calais V V8 is 0.1 seconds faster to 400m than the SS, effectively making it the fastest vehicle in the VE family. The SS and SSV incorporate the same engine and suspension, meaning their performance would be the same in both cars.

However, with the SSV's added features, the SSV is heavier than the SS, making the SS faster than its more expensive counterpart.
7. In terms of exterior design, how do you spot the difference between a WM Statesman and a WM Caprice?

The grille of the Caprice does not have metal strips through it, which is present on the Statesman. Both cars have the same wheelbase, no spoiler and same headlights.
8. Which of these transmissions is not offered in a variant of the Commodore family?


Answer: They look like the ones on the superseded Monaro, rather than the VE Commodore

They are optional on all Commodores except the base level, Omega and the SV6. The SS is the V8 version of the Commodore SV6; there is no V8 Omega, unlike previous models where it was possible to purchase a V8 Executive. All HSVs have a standard V8 engine.
Source: Author wallarobba 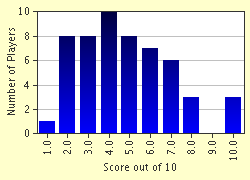 
Other Destinations
Explore Other Quizzes by wallarobba