Here are some basic questions about the Pi Kappa Phi fraternity. This may be hard if you've never been a member.

Share on Facebook
Share on Twitter
Share by E-Mail
Author
SeventyFiveBN
Time
3 mins
Type
Multiple Choice
Quiz #
243,216
Updated
Dec 03 21
# Qns
10
Difficulty
Tough
Avg Score
6 / 10
Plays
306
This quiz has 2 formats: you can play it as a or as shown below.
Scroll down to the bottom for the answer key.

The red rose is the official flower of Pi Kappa Phi, and is given to people who gain a special place in the heart of the members of Pi Kappa Phi.
5. What is the national philanthropy called that is owned and operated by Pi Kappa Phi?

Jim Edmonds is a center fielder for the St. Louis Cardinals; Tommy Lasorda is a Hall of Fame pitcher who played with, and later managed the LA Dodgers; Rich Eisen is a sportscaster and play-by-play announcer. Lance Armstrong, the disgraced drug-taking cyclist, is not a member of Pi Kappa Phi.
8. What were the original letters of the organization that later became Pi Kappa Phi?

Pi Kappa Phi was originally formed as a protest to typical 'Animal House' type fraternities. The letters "Nu Phi" stood for 'Non-Fraternity".
9. What is the quarterly publication of Pi Kappa Phi which is distributed to all of its members nation-wide?


Answer: The Star and Lamp

The Star and Lamp publishes stories on chapter excellence as well as individual member's contributions over the last few months.
10. The members of Pi Kappa Phi strive to be men of C.L.A.S.S. What does the acronym C.L.A.S.S. stand for?

The men of Pi Kappa Phi strive to exhibit all the aspects of C.L.A.S.S. throughout their daily lives.
Source: Author SeventyFiveBN

This quiz was reviewed by FunTrivia editor Bruyere before going online.
Any errors found in FunTrivia content are routinely corrected through our feedback system.
Most Recent Scores
Jan 22 2023 : Guest 159: 9/10
Dec 01 2022 : Andyboy2021: 1/10 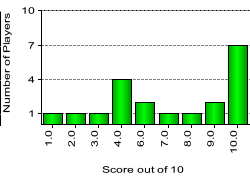 
Other Destinations
Explore Other Quizzes by SeventyFiveBN