Share on Facebook
Share on Twitter
Share by E-Mail
Author
tpiRonJon
Time
4 mins
Type
Multiple Choice
Quiz #
368,335
Updated
Dec 03 21
# Qns
10
Difficulty
Average
Avg Score
6 / 10
Plays
140
This quiz has 2 formats: you can play it as a or as shown below.
Scroll down to the bottom for the answer key.

Quiz Answer Key and Fun Facts
1. The standard engine on every Trans Am GTA throughout the entire production run was what?

The big 5.7L TPI V8 made its debut as the standard engine in the new Trans Am GTA which had 210hp in 1987. Output increased to 225hp in 1988, and again in 1989 by 10 as a result of a revised exhaust system, and output topped off at 240hp for the final two model years.
2. A five-speed manual transmission was never offered with the big 5.7L TPI engine. To get a Trans Am GTA with a five-speed, you had to take the what?

Because the 5-speed manual transmission was not designed to handle over 300 lb/ft of torque, the 5.7L engine could not be mated with this transmission. Instead, one would receive the 5.0L TPI V8, if you wanted to shift for yourself.
3. The Trans Am GTA is visually distinctive from "regular" Trans Ams because GTAs have what?

GTA, marketed toward those who wanted performance and luxury, essentially filled the Firebird S/E's market segment. The Trans Am could be had with all of the same options that a GTA had, except for leather after 1987.

Trans Am buyers could enjoy the brawn and the amenities within a GTA, but without all of the glitz.
4. All Trans Am GTAs with the 700R4 automatic transmission had the same rear gear ratio throughout the entire production run - what ratio did they roll with?

All Trans Am GTAs had 3.27 rear gears with the automatic transmission, and had 3.45 with the 5-speed manual/5.0L TPI engine.
5. GM experimented through much of the 1980s with different fuel injection methods and technologies. Which was the fuel injection system used in the Trans Am GTA engines?

TPI engines are noted for day-to-day benefits, in providing reactive throttle response at low rpm as well as mid-range rpm.
6. All Trans Am GTAs had the same color cross-lace wheels. What color are they?

Trans Ams and Formulas could be ordered with the same high end performance goodies standard on Trans Am GTAs. Formulas have few standard features and use the Firebird body, which is 300 pounds lighter than any GTA, meaning that a smartly-optioned Formula could outrun a GTA costing thousands more.
8. The now-famous "1LE" option package, which contained a number of performance-enhancing goodies, will result in a car without what?

1LEs were race-ready from the factory and were available for order - if you knew about them. History has indicated that taking an A/C delete for a credit triggers the 1LE package, including a baffled fuel tank, light-weight driveshaft, removed sound insulation, larger brakes and rotors among other racing goodies.
9. The Pontiac Trans Am Turbo (TTA) was the fastest American production car, at any price, in 1989.

Utilizing the Buick GNX's turbocharged 3.8L V6 engine in a more aerodynamic body meant speed. Using optimal launch techniques, "Car and Driver" magazine achieved a 0-60 best of 4.6 seconds, and 13.5 second quarter mile times were regularly attainable.
10. What were the biggest limitations of the Trans Am GTA that Pontiac would later rectify in the 4th generation?

In 1993, buying became much simpler. If you wanted a V8, you no longer had to make any choices. The 275hp LT1 was the V8 engine, and could be had with either a 6-speed manual or 4-speed automatic, in either a Formula or Trans Am.

The cherry on top? T-Tops were available on every 4th gen model.
Source: Author tpiRonJon

This quiz was reviewed by FunTrivia editor trident before going online.
Any errors found in FunTrivia content are routinely corrected through our feedback system.
Most Recent Scores
Jan 22 2023 : Guest 80: 3/10
Jan 21 2023 : Guest 178: 4/10 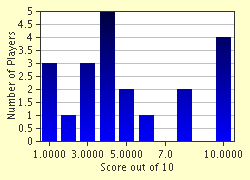 
Other Destinations
Explore Other Quizzes by tpiRonJon