This quiz will ask you to identify which language is being spoken as you travel the world in the "Amazing Race".

Quiz Answer Key and Fun Facts
1. In what language would you say, "żDónde puedo comprar un mapa?" if you wanted to buy a map?

Spanish belongs to the Ibero-Romance group and is the official language in 21 countries around the world, mostly in the Americas. Although it is not an official language in the United States, it is spoken throughout the nation, especially in the Southwest. Spanish came to the Americas through the Spanish conquest during the Age of Exploration.
2. I'm at the train station and ready to go, but I need a ticket first. I find a conductor and ask, "Oů puis-je acheter un billet?" What language am I speaking?

"Oů" -- "where" -- is a very useful word for any traveler in Francophone lands, even if her billets have already been purchased.

Cellardoor provided this question.
3. You're at a train station, and you're not sure exactly where you should be. You ask a passerby, "An welchem Gleis fährt der Zug nach Köln?" In what language should you expect a reply?

German belongs to the Germanic language family, along with such tongues as English, Yiddish, and Afrikaans. Originating in central Europe, it is an official language not only in Germany, but also in Austria, Belgium, Liechtenstein, Luxembourg, and Switzerland. Since German colonization in the 19th century, it's also spoken in parts of Africa.

"An welchem Gleis fährt der Zug nach Köln?" asks which platform the train to Cologne is leaving from.

Question provided by Cellardoor who happened to be in Germany while writing it.
4. I am on the street and I want to take a taxi. I ask a passerby, "Existe um ponto de táxi nas proximidades?" In which country am I most likely to ask this and get an answer?

The question is Portuguese for "Is there a taxi stand nearby?" Of these countries only Brazil has Portuguese as its official language. During the Age of Exploration, Portuguese was spread much like Spanish and now is spoken in nine countries around the world. Brazil is the largest of these Portuguese speaking countries. Portuguese is a Romance language.
5. As I get in the taxi, I ask the cabby, "Quanto costa il biglietto?" Which language is this?

"Quanto costa il biglietto?" is Italian for "How much is the fare?" Italian is a Romance language that traces its roots back to Latin and the Roman Empire. Modern Italian was first formalized in the 14th century with the writings of Dante. He is credited with standardizing the language which became the basis for modern Italian, the official language of Italy.
6. I get into a cab and say to the driver, "Wez mnie na lotnisko proszę." Which city am I most likely in if I want the taxi to take me to the airport?

"Wez mnie na lotnisko proszę," is Polish for "take me to the airport." Warsaw is the capital of Poland and the most likely city to speak Polish of the choices. Polish is a West Slavic language and is the largest of the West Slavic languages based on the number of speakers.

It is the second largest Slavic language, second only to Russian and wider spread than Ukrainian. As of 1986 there were approximately 40 million speakers worldwide.
7. My flight lands in a country and go to get my luggage. I ask someone in the airport, "Kde mohu vyzvednout zavazadla?" Which language is this?

"Kde mohu vyzvednout zavazadla?" is Czech for "Where can I pick up the luggage?" Czech is another West Slavic language with about 12 million native speakers worldwide. In the 19th century it was called Bohemian in English. It is closely related to Slovak, but less so to the Polish language.

The name comes from the Slavic tribe of Czechs who inhabited Central Europe from the 9th to 13th centuries.
8. I want to take a cruise so I ask the concierge, "Var är hamnen?" In which language would I expect to receive an answer?

"Var är hamnen?" is Swedish for "Where is the seaport?" Swedish is a North Germanic language and has an estimated nine million speakers as of 2006. It is closely related to Norwegian and Danish. It is a descendant language of Old Norse.
9. While out sightseeing, I ask a local policeman, "Unde este castelul lui Dracula?". Where would I most likely be?

"Unde este castelul lui Dracula?". is Romanian for "Where is Dracula's castle?" Romanian is spoken mainly in Romania and Moldova with about 24 to 28 million speakers. It is a Romance language. The Romanian alphabet is based on the Latin alphabet.

Vlad the Impaler was the basis for the character Count Dracula. Vlad was born in Transylvania in what is modern day Romania.
10. If I wanted to catch the bus in which city would I most likely ask, "Gde nakhodit·sya avtobusnaya ostanovka?"

"Gde nakhodit·sya avtobusnaya ostanovka?" is Russian for "Where is the bus stop?" Russian is the largest Slavic language with about 144 million native speakers and 114 million secondary speakers, as of 2002 and 2006 respectively. It is grouped among the East Slavic languages. The Russian alphabet is a version of the Cyrillic alphabet.
Source: Author tazman6619 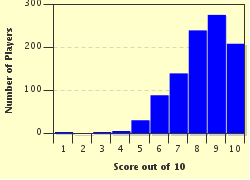