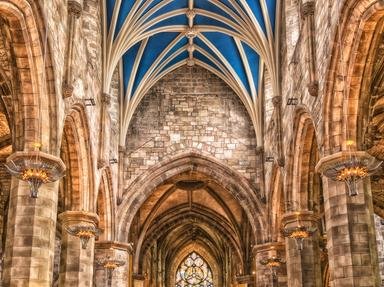 The Cathedral of Florence, Italy Quiz

This cathedral, one of the largest in Christendom, is also one of the most beautiful in the world, and reflects perfectly the city and its orange hue.

Share on Facebook
Share on Twitter
Share by E-Mail
Author
CiaoItalia
Time
4 mins
Type
Multiple Choice
Quiz #
145,749
Updated
Dec 03 21
# Qns
10
Difficulty
Tough
Avg Score
6 / 10
Plays
475
This quiz has 2 formats: you can play it as a or as shown below.
Scroll down to the bottom for the answer key.

The key word in this question is "official." "Il Duomo" is the most common name for Florence's cathedral, but the true name is "Santa Maria del Fiore" or "Our Lady of the Flower." San Giovanni (St. John) is the name of the Baptistery and the name of the city quarter in which the cathedral is located. St. John is also the patron saint of the city. San Pietro (St. Peter), of course, is the name of the great basilica in Rome.
3. Florence's cathedral ranks as the ___ largest Christian church in the world. (Note: in terms of length of the church's nave)

Il Duomo is the third largest Christian church in the world with a nave of 149.28 meters. The largest is St. Peter's in Rome, and second is St. Paul's in London.
4. The cathedral's bell tower (Campanile) was designed by which Renaissance artist?

Giotto, whose full name was Giotto di Bondone, designed the bell tower. He was born around 1266 and died around 1337, before the Campanile was finished.
5. Who designed Florence's revolutionary cathedral dome (cupola)?

Filippo Brunelleschi (brew-nell-ESS-key) was born in 1377 and died in 1446. Lorenzo Ghiberti, his fiercest rival, beat Brunelleschi in the contest to create the doors of the Baptistry of San Giovanni.
6. What was the name of older cathedral that the present one replaces?

Santa Reparata, Christian Florence's second cathedral after San Lorenzo, was seriously dilapidated when it was demolished to make way for Santa Maria del Fiore. Ruins of this older cathedral can be seen on a walk down into the present cathedral's crypt, which contains the remains of Brunelleschi and Giovanni de' Medici, a member of Florence's most important ruling family.
7. Who designed the cathedral?

Arnolfo di Cambio designed the cathedral. Key word: CATHEDRAL, not cathedral DOME.
8. The cathedral actually has two domes that rise from the tambour (base of the dome).

Part of what made Brunelleschi's design so revolutionary is the fact that it consisted of two domes: an inner dome and an outer dome. If, on your trip to Florence, you decide to climb to the top of the dome (or, I should say, domes), you will ascend an innumerable amount of extremely narrow staircases which are contained between the two domes. But the strenuous climb is worth the view.
9. What object is prominent on the back wall of the cathedral's interior?

Paolo Uccello designed this twenty-four hour clock. Painings on it depict four male saints. The clock actually works, and its hands run in a "counterclockwise" direction.
10. What is the diameter, in meters, of the dome?

The dome is forty-five meters in diameter, built to match the diameter of the Baptistery of San Giovanni.
Source: Author CiaoItalia

This quiz was reviewed by FunTrivia editor bloomsby before going online.
Any errors found in FunTrivia content are routinely corrected through our feedback system.
Most Recent Scores
Dec 29 2022 : Grosshaus93: 4/10
Dec 09 2022 : DeepHistory: 10/10 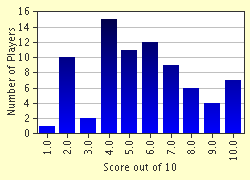 
Other Destinations
Explore Other Quizzes by CiaoItalia