The Month of March Trivia Quiz

March! St. David's Day is March the first, St Patrick's Day is celebrated on March 17th and some years Easter falls in March. What other events and customs are associated with this month?

Share on Facebook
Share on Twitter
Share by E-Mail
Author
cryptix
Time
5 mins
Type
Multiple Choice
Quiz #
67,095
Updated
Dec 03 21
# Qns
10
Difficulty
Tough
Avg Score
5 / 10
Plays
1539
This quiz has 2 formats: you can play it as a or as shown below.
Scroll down to the bottom for the answer key.

Quiz Answer Key and Fun Facts
1. In the original Roman calendar which month was March?

March was originally the first month, but when Julius Caesar reformed the calendar it became the third month.
2. For which of the Roman gods is March named?

Mars was the Roman god of war.
3. What is most commonly considered the flower for March?

The daffodil symbolizes spring and rebirth.
4. March has more than one birthstone. True or false?

Chalcedony (bloodstone) and aquamarine for courage.
5. Which of these occurs in March: a solstice or an equinox?

An equinox is when day and night are the same length. In the northern hemisphere the vernal equinox occurs in March. In the southern hemisphere it is the autumnal equinox and can occur on March 19, 20, or 21.
6. Complete this saying: 'Mad as a March ....'

The behaviour of hares in the breeding season gave rise to the mad March hare saying. In Europe male hares make wild chases and have boxing matches!
7. There are several other sayings about March, perhaps the best known is 'March comes in like a lion and goes out like a ----?

8. Caesar was told 'Beware the Ides of March' On what date are the ides?

9. When are the first three days in March considered unlucky?

If rain falls during the first three days in March it is supposed to foretell a bad harvest. Some superstitious farmers wait until the fourth of March before sowing crops. These days are known as 'blind days'.
10. Which of these Jewish special days usually occurs in March?

Purim is a Jewish festival. It is held in remembrance of the time the Jews escaped destruction during the reign of the Persian king Xerxes. Usually occurs in March, but in 2002 was on February 26. it is on the 14th day of the Jewish month of Adar. Chanukah - December, Shavuot - May, Yom Kipper - September.
Source: Author cryptix

This quiz was reviewed by FunTrivia editor minch before going online.
Any errors found in FunTrivia content are routinely corrected through our feedback system.
Most Recent Scores
Oct 21 2022 : Guest 108: 5/10
Oct 18 2022 : Guest 1: 6/10 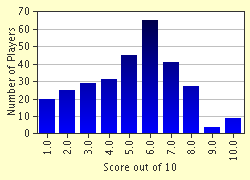