When That April Trivia Quiz

...comes, it brings days of celebration and remembrance across the world.

Share on Facebook
Share on Twitter
Share by E-Mail
Author
zorba_scank
Time
4 mins
Type
Multiple Choice
Quiz #
385,774
Updated
Dec 03 21
# Qns
10
Difficulty
Average
Avg Score
7 / 10
Plays
357
Awards
Top 35% Quiz
This quiz has 2 formats: you can play it as a or as shown below.
Scroll down to the bottom for the answer key.

Quiz Answer Key and Fun Facts
1. In which of these countries is the festival of Sizdah Be-dar (also called 'Nature Day') an official holiday?

Sizdah Be-dar is celebrated on the thirteenth day after Nowruz, the Persian New Year, which occurs on the day of the vernal equinox indicating the beginning of Spring in the Northern Hemisphere. Since this generally falls on the 21st of March, Sizdah Be-dar is typically celebrated on the 1st or 2nd of April. Picnics and spending time outdoors are a main feature of this festivity which is also known as 'Nature Day'.
2. The traditional Chinese festival of Qingming typically falls on the 4th or 5th day of April. Which of these are particularly remembered on this day?

Qingming is also known as Ancestors' Day and is a public holiday in China. On the day of this festival, people visit and clean the graves or tombs of their ancestors and light incense sticks to honour them. Food offerings may also be made to the departed.
3. Vesak is one of the most important festivals for followers of the Buddhist faith. While the date typically changes every year based on the lunar calendar, which country has fixed the celebration for the 8th of April after officially adopting the solar calendar?

Vesak commemorates the birth, attainment of nirvana and death of the Buddha. It is believed that each of these momentous events occurred on the full moon night during the month of Vesak per the ancient lunar calendar. While the month of Vesak is considered to fall between the periods of April and June of the western calendar, the actual date for the festival varies every year and may also be chosen differently by people in different countries. Once Japan formally adopted the western solar calendar, the date for Vesak was fixed to the 8th of April.
4. Many different regions of India celebrate harvest festivals during the month of April. In which state is the festival of Baisakhi celebrated?

Baisakhi, also known as Vaisakhi, is celebrated on the first day of Vaisakh, the first month of the Punjabi festival. Thus it is regarded as the new year for Punjabis. The day also holds additional significance for the Sikh community as it commemorates the establishment of the Sikh army, the Khalsa, by the tenth Sikh Guru, Guru Gobind Singh in the 17th century.
5. Which Christian festival, that commemorates the resurrection of Jesus, has a movable date and may sometimes fall during the month of April?

The date for Easter is chosen based on the lunisolar calendar. The Western church fixes the date for the first Sunday that occurs after a full moon appearing on the 21st of March (or the soonest day after that). As such, it may fall any time during the months of March and April with 22nd March being the earliest possible date and 25th April the latest.

Easter is the most important among all the festivals celebrated by Christians as it marks the resurrection of Jesus Christ from the dead and forms the very basis of the Christian faith.
6. Another festival that on some years occurs during April is the Jewish festival of the Passover. Which of these Biblical figures is closely associated with this festival?

Moses was appointed by God to deliver the Israelites from the Egyptians. When Pharaoh refused to let the Israelites go, God inflicted ten different plagues, each with greater intensity then the one prior, to force the king's hand. The tenth and last plague was the killing of the first born male child in all Egyptian households. The Israelites were instructed to apply the blood of a ram on the door of their houses so that the Angel of Death would pass over them keeping them safe.

Jesus celebrated the Passover with his disciples before his crucifixion. This meal is now famous as the Last Supper. As a result, the Christian festival of Easter and the Jewish Passover are generally celebrated around the same time.
7. Which of these cultures celebrates their new year festival Songkran in April?

Songkran is the Thai New Year festival which falls on the 13th of April every year. The celebrations generally extend to the next two days as well. Songkran derives its name from the Hindu festival of Makar Sankranti which celebrates the onset of spring. The festivities include water fights, with main roads being closed off on this day.
8. Australia and New Zealand observe a national day of remembrance on the 25th of April. It originally honoured soldiers who fought in which faraway country?

ANZAC Day was originally observed in honour those from the Australian and New Zealand Army Corps (ANZAC) who had fought in the Battle of Gallipoli during World War I. The Gallipoli peninsula is located in the European part of Turkey and borders the Aegean Sea. ANZAC Day now commemorates all those from Australia and New Zealand who have died in the service of their countries.
9. The followers of which lesser-known faith observe a 12 day long festival called Ridvan that generally begins on the 19th of April?

The Ridvan is regarded as the holiest festival by adherents of the Baha'i faith. It is celebrated as per the Baha'I calendar and generally begins at sunset on the 19th of April. The festival commemorates their founder, Bahá'u'lláh's, declaration that he was the Manifestation of God.

It is named after the Garden of Ridvan (which translates to Garden of Paradies) located outside Baghdad, where Bahá'u'lláh spent 12 days after he was sent into exile.
10. The last day of April is celebrated as "Witches' Eve" in some parts of Europe. Ironically, this is the precursor to which Catholic Saint's feast on the next day?

According to German folklore, witches gathered together in a forest near Brocken on the night of 30th April and awaited the arrival of spring. It later came to be associated with Saint Walpurga, an English missionary, whose feast is celebrated on the 1st of May. Since this is also celebrated as May Day with the bonfires being lit on the evening prior, the eve was rechristened to Walpurgisnacht (Walpurga's night) from Hexennatch (Witches' night).
Source: Author zorba_scank

This quiz was reviewed by FunTrivia editor stedman before going online.
Any errors found in FunTrivia content are routinely corrected through our feedback system.
Most Recent Scores
Jan 29 2023 : smvartanian: 7/10
Jan 09 2023 : tornadosteve: 10/10 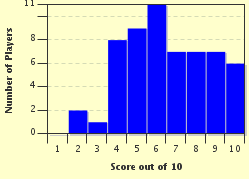 Related Quizzes
This quiz is part of series Commission #45:

When will you get around to playing these quizzes? All of the titles in this 45th Quiz Commission from the Author's Lounge contained the word 'When'. When did this launch? January 2017! Hop to it!


1. When I Was Old Average
2. When Will My Pizza Arrive? Easier
3. When the End is Nigh Tough
4. When in Rome Easier
5. When I Resigned Easier
6. When I Was One-and-Twenty Average
7. When Shall We Three Meet Again... Very Easy
8. When the Earth Moves Average
9. When the Walls Come Down Average
10. When Hell Freezes Over Easier
11. When Irish Eyes are Crying Average
12. When Geek Meets Geek! Average