The Month of April Trivia Quiz

April, month of showers, in some areas of the world at least. What do you know of the customs and festivals of April?

Quiz Answer Key and Fun Facts
1. What does the word April mean?

The Romans called the month April is from the Latin word aperire to open. Some think the word April could come from Aphrodite.
2. What is the gem associated with April?

The diamond for innocence.
3. April the first is April Fools' Day. We call someone who is tricked an April Fool. What do the French call such a person? (English translation will do)

Poisson d'Avril in French.
4. Which of these flowers is considered the flower for April?

Some sources also consider the sweetpea as also being April's flower.
5. Easter is always in April. True or False?

Easter is a moveable feast. It can be as early as March 22. The latest date it can be is April 25. Easter Sunday is the first Sunday after the first full moon that occurs on, or after March 21.
6. This day, created to make people aware of environmental problems, was first celebrated internationally on April 22, 1970. What day is it?

Earth Day started as a student movement, and was originally held on March 21.
7. Which of these countries does not have an Independence Day in April?

After their marriage Robert and Elizabeth Barrett Browning spent most of their life in Italy. This quote is the opening line of 'Home Thoughts from Abroad'.
10. The Anglo-American poet T. S. Eliot wrote 'April is the ... month' What is the missing word?

These are the opening words of 'The Waste Land'. They are partly intended as a distorted reflection of the opening lines of Chaucer's "Canterbury Tales" ("Whan that Aprille with his shoures soote..."), which describes April in more romantic terms.
Source: Author cryptix 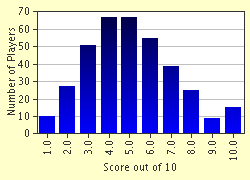