This quiz deals with the life of Saint Patrick, and the legends that surround him. There are conflictions in the information about him, so I have tried to verify each question from at least two different source.

Share on Facebook
Share on Twitter
Share by E-Mail
Author
cryptix
Time
5 mins
Type
Multiple Choice
Quiz #
70,075
Updated
Jan 25 23
# Qns
10
Difficulty
Tough
Avg Score
6 / 10
Plays
1647
This quiz has 2 formats: you can play it as a or as shown below.
Scroll down to the bottom for the answer key.

It is not known exactly where he was born. It could be in south-west England or even near Dumbarton in Scotland.
2. St.Patrick's Day is March 17. What does this date commemorate?

He died on March 17, the year was probably 461AD. The Catholic encyclopedia gives his dates as 387-493 which would make him living until to over a hundred.
3. Why did Patrick go to Ireland?


Answer: he was taken by pirates

Marauders seized him, took him to Ireland and sold him to an Irish chieftan, for whom he worked as a herdsman.
4. After six years he left Ireland and went to this country.

In those days it was known as Gaul. Some accounts say he returned to Britain.
5. He became a monk and later returned to Ireland. What did he return to Ireland as?

He was sent to Ireland as a missionary bishop.
6. How many churches was St.Patrick supposed to have founded?

He was also said to have converted 120,000 people to Christianity.
7. What did Saint Patrick use to illustrate the Trinity, and which later became a symbol of Ireland?

St. Patrick used the shamrock, which has three leaves on each stem, to show that God was three in one: God the Father, God the Son and God the Holy Ghost.
8. A legend says that St.Patrick rid Ireland of these creatures.

9. When was the first St.Patrick's Day parade held in New York City?

10. The color associated with St.Patrick's Day and with Ireland is green. What green nickname does Ireland go by?

If you don't wear green on St.Patrick's day you might get pinched!
Source: Author cryptix

This quiz was reviewed by FunTrivia editor stedman before going online.
Any errors found in FunTrivia content are routinely corrected through our feedback system.
Most Recent Scores
Jan 23 2023 : Guest 76: 0/10
Jan 15 2023 : Guest 100: 4/10 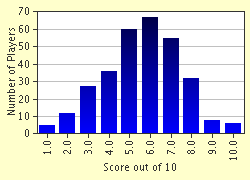