Here is a quiz on some of the more unusual, beautiful or unique vehicles that are no longer made. I must give author 'paulmallon' credit for suggesting this title in the Player Author Challenge page and providing me inspiration.

Quiz Answer Key and Fun Facts
1. In 1926 the Auburn Automobile Company merged with which other automobile company in an attempt to stay afloat during the Great Depression?

Auburn Automobile Company was founded in 1900, while Duesenberg was founded in 1913. Both were well-known for their luxury automobiles. Both companies did well in the beginning of the horseless carriage industry. Sadly companies of the time were generally not trying to sell their vehicles to the masses, instead focusing on the higher-income population.

In 1926 the two companies merged in an attempt to save themselves. It did not work, and the last production vehicle rolled off the line in 1937.
2. James Dean might be able to tell you what the alternate name for the Porsche 550 is?

One of the most famous racing sports cars developed in the 1950s was the Porsche 550, also known as the Porsche Spyder. 60 years later the remaining models of the original cars are highly valued by collectors. A 1955 edition of this car was purchased by actor James Dean who named the car "Little Bastard" which he had painted on the car.

A daring design, success on the racetrack, and even the notoriety caused by Dean's death have all contributed to the success of this vehicle.
3. By which of the following names was the Zastava Koral better known?

The Zastava Koral is called a Yugo throughout most of the English speaking world. This Yugoslavian car was designed to be cheap to purchase and cheap to run. Pretty much, it fulfilled both of those goals. Fancy styling, high speed, air conditioning, were not reasons that people bought this car. Yugo, with the help of Fiat, produced cars from 1980-2008.

These cars are still commonly seen in present-day Serbia, but are rather rare in English speaking countries, partially because getting parts for these vehicles is very difficult.
4. Built in 1815, this early automobile constructed by Polish engineer Josef Bozek is powered by which of the following?

Many people are unaware of how early the first automobiles were built. This vehicle, which was ahead of its time, ran on steam. Its resemblance to vehicle that were being built a hundred years later is unmistakable. Bozek helped construct the first steam engine in Austria, the first steam automobile, the first steamship, the first steam powered railroad carriages, and some of the first water pumps in his country.
5. This 1910 Gräf & Stift is a style known as a phaeton, which indicated which of the following things?


Answer: That it was an open car with no protection from the weather

The term phaeton described an early style of touring car which had no hard roof and no protection from rain or any other type of weather. The name came from the phaeton style carriage which was also meant to be open. This 1910 Gräf & Stift phaeton was made by an Austrian car company known for its luxery automobiles.

In 1914, it became the car in which Franz Ferdinand and his wife were riding when they were assassinated in Sarajevo. Gräf & Stift produced many types of vehicles from 1902 until 2001.
6. The Knox Automobile Company originally sold vehicles known as runabout models, which meant which of the following?


Answer: It had no windshield, doors, or top

This image of a 1901 Waterless Knox Threewheeler, had no windshield, doors, or top, and held two people in a single seat. This is why it was considered a runabout model. It also originally only had three wheels! Knox made automobiles from 1900 until 1914 making them a very rare commodity in today's antique automobile market. Knox did not do well in the highly competitive automobile market and switched to making trucks and tractors before closing their doors in 1924.
7. This 1958 Pacer was the first model produced by the new car company, American Motors Corporation (AMC).

AMC did produce a model which they named the 'Pacer' between 1975-1980. But this beautiful car is a 1958 Edsel Pacer which was produced for that year and that year only. It unique styling and abundance of chrome did not save this car, nor Edsel in fact. Like most models of Edsel, this car was innovative and had the transmission shifting system in the center of the steering wheel.

It also had self-adjusting brakes and ergonomically designed controls. Shoddy workmanship and poor advertising helped end this car division before it really got off the ground.
8. The distinctive Rolls-Royce radiator grille is made completely by hand and always has been. No measuring instruments are used in its production.

The Rolls-Royce is so very well-made that over half of the vehicles that they have ever produced are still road-worthy. Their distinctive grill is a work of art made completely by hand. You will never find a half-smoked cigarette in the ashtray of a Rolls, because it empties automatically.

Another tid-bit that many find fascinating is this quote by Nostradamus in 1548: "From Albion's shore shall come a marvelous conveyance, a carriage silincieux, bearing the arms of Rolles De Roi."
9. Many early cars did not have steering wheels, using which of the following options as a means for directing the movement of the car?

The beautifully restored 1900 Liver shown in this image was one of the many that used a tiller to steer with. But the popularity of the steering wheel spread from Europe to America where it was adopted and quickly started to replace the tiller. Within a decade the tiller was looked at as a thing of the past and steering wheels had arrived to stay.
10. Which of the following options was a car company known for its unique designs including cars with three headlights?

Tucker was a post WWII automobile manufacturer that was decades ahead of its time. The car was designed with numerous safety features not seen at the time, including disc brakes, padded dashboards, seat belts and a built-in roll-bar. The third headlight, nicknamed the "Cyclops Eye" is one of the hallmarks of the car. Today, these cars are valued in the millions of dollars, as only 51 were ever made. Rumors of foul play by other large automotive companies were explored in the 1988 movie "Tucker: The Man and His Dream", suggesting they did all they could to make his company fail.
Source: Author dcpddc478 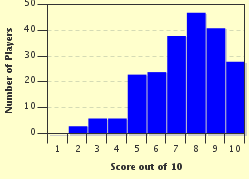