Whatever your Latin level - neophyte, expert or dilettante (like me) - I hope this quiz will offer at least a modicum of delectability for your cerebral capabilities.

Share on Facebook
Share on Twitter
Share by E-Mail
Author
einhardno
Time
5 mins
Type
Multiple Choice
Quiz #
367,175
Updated
Dec 03 21
# Qns
10
Difficulty
Tough
Avg Score
6 / 10
Plays
444
Awards
Top 20% Quiz
This quiz has 2 formats: you can play it as a or as shown below.
Scroll down to the bottom for the answer key.

Quiz Answer Key and Fun Facts
1. Which famous Latin song, frequently sung in academic contexts, urges us to enjoy ourselves while we are young?

"Gaudeamus" is from the 18th century, but based on a manuscript from the 13th. It is also known as "De Brevitate Vitae" (On the Shortness of Life). Its standing in academic circles likely stems from the verse with the words "Vivat academia". "Antea" is a Latin version of Lennon and McCartney's "Yesterday", written by Tuomo Pekkanen, a Finnish professor of Latin.

The "Benedicat" title is my own, and is supposed to mean something like "May God bless the fatherland". The last one is usually associated with the Roman senator Cato the Elder (234-149 BCE), who was said to end every speech in the Senate with an exhortation to destroy Carthage.

In fact, he was not the only one to talk like that, just the best known. The full phrase (in this variety) is "Praeterea censeo, Carthaginem esse delendam".
2. The term "president" is used in many languages and contexts. Which of these is an acceptable translation of the Latin origin of the word?

A president presides, i.e. sits before, in front or at the head. It comes from the verb "praesidere" (inf.), which has three meanings, according to my two Latin dictionaries: 1. Sit in front. 2. Defend, protect. 3. Lead, direct. In German, a commonly used term is "Vorsitzender" (m.) or "Vorsitzende" (f.), while Icelandic has "forseti". Both of these mean "one who sits in front." "First speaker" is taken from Isaac Asimov's Foundation novels, where the First Speaker is the effective head of the Second Foundation.

In some parliaments, the chairperson is called the Speaker. A clerk these days is not an elevated position, but historically, this was not always the case. Especially people who could write were considered valuable employees (or slaves), and sometimes became powerful and privileged.
3. A high-ranking leader in the Roman priesthood had a title which, today, is used for the Pope, sometimes known as the Bishop of Rome. What title was this?

"Pontifex" means "bridge-builder". The title may go back to when the priests were responsible for dealing with the Roman river-gods. In time, a member of the priesthood, or college of pontiffs, came to be called "pontifex", and their leader was the "maximus"; the greatest. Later, it became an imperial office, meaning that the emperor was PM. "Custos clavium" means "keeper of the keys", and is the Latin title of chapter 4 of "Harry Potter and the Philosopher's Stone" ("Harrius Potter et philosophi lapis", trans. Peter Needham), but could have been appropriate for the Pope as well. "Caput senatus" is a title I made up.

The first or foremost member of the Roman senate was commonly called "princeps senatus", or "first of the senate", while "caput" is "head". And just in case you're wondering, the genitive of "senatus" is, in fact, "senatus".
4. The word "doctor" is composed of the verbal stem "doct-" and the suffix "-or", which is used to make a noun. What meaning do these add up to?


Answer: One who teaches; teacher

The verb is "docere" (inf.); to teach. The stem "doct-" is from the perfect participle form . The most frequent type of doctor today is probably "philosophiae doctor", or PhD, which is a degree and title that can be obtained in a wide range of academic fields.

The practice of using "doctor" for practitioners of medicine (physicians and surgeons) seems to have begun or be established in the late Middle Ages, although I am not staking my reputation on that.
5. If I said "Mi fili Brute", meaning "My son Brutus", what grammatical case would I be using?

The vocative case is used for calling on or addressing someone directly, rather than just referring to them. Calling on gods is a good example, but it could be used for people or things, too. Not all Latin nouns have a distinct vocative form, and some grammarians do not acknowledge the vocative as a grammatical case at all.

The possessive pronoun "meus" (my) also has a vocative form, as you can see (it's "mi"). The ablative case is an amalgam of many aspects of older grammar, and is used for a number of purposes, but not vocatively. And for the record: I do not have a son, and if I had, his name would not be Brutus.
6. Which of the following Latin words is the odd one out?

All the wrong choices are to do with females. "Femina" and "mulier" are words for "woman", while "puella" is "girl" or sometimes "young woman". Also, these three are nouns. "Virilis" is an adjective, based on the noun "vir", which means "man". Thus, "virilis" is "manly" or "of a man". So when a friend of mine some years ago described a group of young women as "virile", I tried to hide my smile, because I knew he meant that they were healthy young creatures with a zest for life. You figure out the rest.
7. Aristotle argued for the existence of an "unmoved mover" or "prime mover", who at one time started and now upholds the universe and everything. Which of these best fits such an idea?

This is not a religion or philosophy quiz, so enough about Aristotle. "Primus" means "first", "foremost". The simple explanation is that it is an ordinal number, but for those with time to investigate, there's more to it than that. "Primus inter pares", or "first among equals" is a famous expression. "Motor" is from the past participle stem of "movere" (inf.); to move. To the stem "mot-" we add the suffix "-or" and get a masculine noun.

A primate, too, is one who is first, earliest or most important, and is frequently used in Christian churches for the leader of the bishops.

It is also the order of mammals to which humans belong, as well as a more general term for a leader. A primrose is a pretty flower.
8. In some languages, the set materials or reading list for a school or university subject can be called the "pensum". What did this refer to in ancient Roman culture?


Answer: A daily amount of wool for spinning

This amount was weighed out, which is the connection to the adjective "pensus"; weighed. The spinning was typically done by female slaves. By extension, "pensum" came to mean a set task. In American schools, according to the Oxford English Dictionary (oed.com), a pensum can be a task meted out to students as punishment. Being used to pensum (plural pensa) in every subject from primary school through university, this usage seems rather strange to me, but it's well known that Americans are strange people.

The kind of "pensum" we have in schools here in Norway is sometimes translated as "curriculum", which is unfortunate, as curriculum normally has a wider meaning.
9. Words and syllables are fun. Sometimes, a syllable is called an antepenult, which means what?

Another term is "antepenultimate". The "ult" or ultimate syllable, is the last. Before that comes the one which is "paene" (or "pćne" or "pene") last, i.e. almost last or next to last. And the one "ante" (before) that one is the "antepenult(imate)". Fun, huh? This is all to do with word stress, which falls on syllables. Stress is very important in Germanic languages, but for many other languages or language families, other things matter more, such as the length of a syllable.

This was the case in Latin, and still is in the Romance languages.

Although concepts like stress and syllables are highly useful, they are also complex and not a little mysterious.
10. "Puer puellam videt" can mean "The boy sees the girl". How can we tell that it's not the other way around?

Word order can be manipulated in Latin, and in this sentence, any order is possible. "Videt puellam puer" (sees the girl the boy) also means that the boy sees the girl, and is perfectly grammatical. The thing is that "puer" is in the nominative case, indicating that it is the subject of the sentence, while "puella" has the accusative ending "-m" added to the stem, marking it as the direct object.

This is very different from English, which has lost almost all of its old case system, and relies heavily on word order to determine meaning.

Another thing worth knowing is that Latin has no morphological determinedness. So whether it's "girl", "a girl" or "the girl" is not discernible just from the form of the word.
Source: Author einhardno

This quiz was reviewed by FunTrivia editor stedman before going online.
Any errors found in FunTrivia content are routinely corrected through our feedback system.
Most Recent Scores
Jan 05 2023 : Guest 81: 8/10
Dec 26 2022 : Guest 5: 9/10 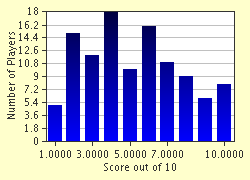 
Other Destinations
Explore Other Quizzes by einhardno