I will give you ten world heritage sites, and you will be asked to match them up with the country in which they are located. Have fun!

The Taj Mahal is located in the town of Agra, in northern India. It was built in the 1600s at a cost equivalent, in today's dollars, to almost a billion US dollars. It is considered the best example of Mughal architecture.
2. Petra

Petra is a town in the south part of Jordan which was unknown to the Western world until 1812. A poet aptly described Petra as "a rose-red city half as old as time".
3. Timbuktu

Located on the edge of the Sahara desert in Mali, Timbuktu is an important Islamic cultural center. In its heyday in the 12th century, its university is believed to have had 25,000 students.
4. Machu Picchu

Machu Picchu is a site in the southern part of present-day Peru, built by the Incas in 1450 and abandoned a hundred years later at the time of the Spanish conquest. It remained unknown to the outside world until discovered in 1911.
5. Chichen-Itza

Located in the north part of Mexico's Yucatan Peninsula, Chichen-Itza was one of the largest cities of the Mayan civilization.
6. Borobudur Temple

Borobudur Temple is a 9th-century Buddhist temple in the central part of the Indonesian island of Java. It is known as the world's largest Buddhist temple.
7. Galapagos Islands

The Galapagos Islands are located in the Pacific Ocean 563 miles west of continental Ecuador, and, like continental Ecuador, they straddle the equator. They became well-known as a result of Charles Darwin's visit to them in the 1800's, but European explorers had visited the islands as early as 1535.

The islands contain many unique animal species, including iguanas, tortoises, sea cucumbers, the blue-footed booby, and the waved albatross.
8. Angkor

Located deep in the forests of Cambodia, Angkor was the capital of the Khmer Empire from the 9th to the 15th centuries. The most famous of its many temples is Angkor Wat, which appears on Cambodia's flag.
9. Rapa Nui National Park

Rapa Nui National Park is located on Easter Island, which sits in the Pacific Ocean over 2,000 miles west of continental Chile. Because the nearest inhabited land, Pitcairn Island, is located 1,289 miles away, Easter Island is noteworthy as one of the most remote inhabited islands in the world.

It is a World Heritage site due to the 887 stone statues which are thought to date back to as early as 300 A.D.
10. L'Anse aux Meadows

L'Anse aux Meadows is located at the northernmost tip of the island of Newfoundland. It is noteworthy as the site of a Viking settlement established around 1,000 A.D.
Source: Author chessart 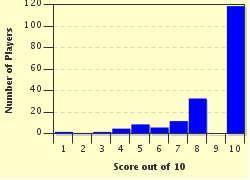 Related Quizzes
This quiz is part of series World History and Geography: