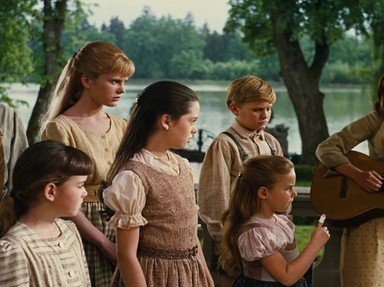 220 The Sound Of Music Trivia Questions, Answers, and Fun Facts

How much do you know about The Sound Of Music? This category is for trivia questions and answers related to The Sound Of Music (Movies). Each one is filled with fun facts and interesting information.
Related Questions & Answers:   Toy Story    Shrek    Spider-Man    Terminator    Twilight    Titanic    Resident Evil    Julie Andrews
1 Which daughter claims to be Brigitta?


After Maria arrives at the Von Trapp-house and the Captain whistles the children to introduce themselves, Maria is left alone with the children. Maria then asks the children to repeat their names and tell her how old they are. First Liesl lets Maria know that she is 16 and doesn't need a governess, then Friedrich lets her know that he is 14 and impossible and thirdly Louisa tells Maria that "I am Brigitta".

2 The real Maria grew up around Vienna. However, in the movie it is alluded that Maria grew up somewhere else. Where would that be?


In the beginning of the movie, where Maria and the Mother Abbess were talking about Maria singing on the mountain, Maria said that she grew up on that mountain. Later in the conversation she also said that she used to look down upon the nuns while they were working in the garden and she longed to be one of them.
Later in the movie, Maria and the children are running around town singing and having the time of their lives. This scene is referred to later as to have taken place in Salzburg. This is the same place we see Maria walking through on her way from the abbey to the Von Trapp-estate at the beginning. A couple of times the family is shown at the setting for the Salzburg Music Festival. For these reasons I assume the movie must be set around Salzburg.

3 Who opens the door to the ballroom when Maria is dancing around?


He opened the door and she stopped dancing, then she looked at him and ran out of the room.

From Quiz: "Sound of Music" Part 2

4 What was the name of the original song that was replaced by the song "Something Good" in the love scene?


"An Ordinary Couple" was dropped from the motion picture, as it was not romantic enough. It was replaced by "Something Good," written by Rodgers.

5 What is the name of the youngest child in the Von Trapp family?


Gretl is played by Kym Karath in the 1965 version of the musical.

From Quiz: "Sound of Music" Part 1

6 "Your dress is the ugliest one I ever saw!"


Brigitta tells it to Maria when she meets the children for the first time.

7 What was the Baroness Schraeder's number in the ball game she played with the Von Trapp children?

8 When Maria was on the bus going to the von Trapp house for the first time, who was sitting across the aisle from her?

Answer: A lady wearing a hat

9 When Maria first meets Franz, she mistakenly addresses him as "Captain." What does he reply?


Franz later turns out to be a Nazi sympathizer.

From Quiz: 'The Hills Are Alive!'

10 An easy one for start: in what country is Salzburg situated?

From Quiz: Where In Salzburg Does This Scene Take Place?


This was right after the Captain said that the children could not have dinner.

12 He wonders what the grass tastes like and is incorrigible!


He was born in Los Angeles, California. Robert Wise, director of the film, walked up to him and invited him personally to join the cast in Salzburg! Duane Chase's now 52 and lives in Washington.

From Quiz: "Sound of Music" The Movie Characters

13 An easy one for start: How many children are there in the movie?


And here they are: Liesl, Friedrich, Louisa, Kurt, Brigitta, Marta and Gretl (at the end, because she's the most important).

From Quiz: "Sound of Music" in Numbers

14 How many children were there?


There were five girls and two boys who ranged from 5 years old to 16 years old.

From Quiz: 'The Sound Of Music' Children

15 During the Captain's party, all the children are standing outside watching. We see Louisa. What color is the bow in her hair?


You only see it from the side, so it's hard to catch the color.

16 Who plays the character Maria?

From Quiz: 'Sound of Music'

17 "The Sound of Music" was filmed in this country:


This is also the country in which the movie is set.

From Quiz: A Few of My Favourite Things

18 Where does the first dialogue in the movie take place?

Answer: In a corridor in the Abbey

From Quiz: The Sound Of Music

19 According to Liesl, why do the children play tricks on the governesses?

Answer: To get their father's attention


Since his wife died, Captain Von Trapp has distanced himself from his children because of the sorrow it brings. The children feel sad about it because they love their father and want to be close with him. On the first night when Frau Schmidt brings Maria some fabric for new dresses, she tells Maria that after the Captain's wife died he distanced himself from everything that reminded him of her, even the children. While on their picnic in the mountains, Maria says that she can't imagine how children as nice as them can play such awful tricks on people, Liesl responds with "How else can we get father's attention?" When the Captain returns from Vienna, he and Maria start arguing about the children and Maria states that the children want so much to be close to him.

Answer: The children needed a governess.


Maria Von Trapp (the real name of the child portrayed as "Louisa" in the movie) was sick and couldn't attend regular school with the others. Therefore she needed a private teacher. In the movie, all the children were in good health but their father was having trouble keeping a governess at the house because the children kept playing tricks on them to get their father's attention.

The fact that one of the children was named Maria, was part of the reason why the children's names were changed in the movie, as it would be confusing having two characters named Maria.


The Baroness says this to the Captain on the balcony whilst they are calling off their engagement. The Baroness finally admits to herself that Captain von Trapp loves Maria.

22 Who else did director Robert Wise consider for the role of Captain von Trapp?

From Quiz: "Sound of Music" Part 2

23 What is the reason the children give to Maria to explain why they played horrible tricks on their past governesses?

Answer: To get their father's attention


Liesl answers her question while Maria and the children are on a day out in the Austrian hills.

24 What is the Von Trapp children's uncle's name?

From Quiz: "Sound of Music" Part 1

From Quiz: "The Sound of Music" Lyrics Part 2

26 "I will lift up mine eyes unto the hills. From whence cometh my help... God be with you."


One of the last scenes, when the whole family hides from the Nazis in the Abbey.

27 He's seventeen goin' on eighteen and wants to take care of Liesl, later becomes one of the Nazis.


In fact, while making the film Daniel Truhitte (Rolf) was 2 years younger than Charmain Carr (Liesl). He lives now in North Carolina and has 3 sons. Was originally turned down for the role of Rolf because his hair was brown, but was given another chance after turning his hair ;)

From Quiz: "Sound of Music" The Movie Characters

28 What year was the movie released?


It was at Rivoli Theatre in New York on March 2nd 1965. And won five Academy Awards including for Best Movie in this year!

From Quiz: "Sound of Music" in Numbers

29 During the Captain's party, all the girls are wearing stockings except one. Which girl is it?

30 What were the children's play clothes made from?


Maria makes them herself, from the old drapes in her room.

From Quiz: 'Sound of Music'

31 Who always makes Maria kiss the floor after a disagreement?


But lately, Maria's taken to kissing the floor when she sees her coming, just to save time!

From Quiz: The Sound Of Music

32 Why does Liesl suffer a heartbreak?


After the Anschluss where the Germans invade Austria, Liesl's boyfriend, Rolf, joins the Nazis. This causes him not to want to spend any time with her since he now "has more important matters" as he puts it. After he gives her a letter for her father at the concert hall, he leaves her with a look on her face that, to me, seems like she is very hurt. Later, at the house, she asks Maria what she should do when she stops loving someone "... or he stops loving you." That last line also tells me, that she is still hurting. During their escape, while hiding in the cemetery, Liesl notices Rolf among the Nazis and lets out a gasp and gives away their hiding place. This also seems like she isn't quite over him yet.

33 The real Georg Von Trapp was a happy man who loved music. When Maria arrived, the discipline became more strict and she would erupt in angry outbursts. What was different about this statement at the time of Maria's arrival in the movie?


In the movie, the housekeeper told Maria that the house used to be filled with laughter. Since Georg's wife died he ran the house with whistles, like he was on one of his ships again, even the children wore uniforms. While Georg was in Vienna, Maria taught the children how to sing.
Both were very musical, but at the time of Maria's arrival Georg didn't allow music in the house (which included himself).

34 Which child laughs when Maria tells the Captain she disobeyed his orders of the children's bedtime because of the thunderstorm?


Whilst singing "My Favourite Things", Captain Von Trapp enters Maria's bedroom and is less than pleased to find his children up past their bedtime.

35 What does Kurt say they put on Fraulein Josephine's toothbrush?


Maria replies by saying "How can children as nice as you play such horrible tricks?"

From Quiz: "The Sound of Music" Lyrics Part 2


Sister Margaretha tells it to Sister Sophia while discussing if Maria should leave the Abbey.

38 How many telegrams did Rolf deliver to the Von Trapp family estate?


There were three that had to be delivered, but one of them was given to Liesl in the Town Square rather than being taken to the house.

39 Who tells Maria that her dress is the ugliest one she's ever seen?


Kurt agrees that it is ugly, but says it is not the ugliest that he's ever seen.

From Quiz: 'The Hills Are Alive!'

40 The wedding scene for "The Sound of Music" was filmed there.

Answer: The cathedral of Mondsee


25 kilometres east of the city. The basilica was built in 1487, and the baroque Altar by Hans Waldburger dates from 1626.

From Quiz: Where In Salzburg Does This Scene Take Place?

The rest of the questions and answers can be found in our quizzes here:
The Sound Of Music Quizzes