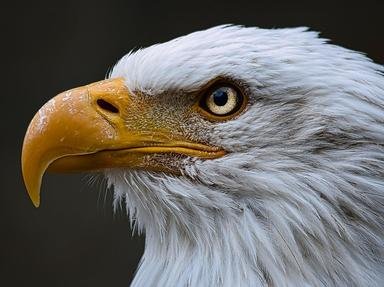 Atlanta, Georgia has a wonderfully diverse ecology of feathery friends. Come step into my backyard and test your knowledge about the birds of my home region. Enjoy!

Quiz Answer Key and Fun Facts
1. The beautiful northern cardinal is a common visitor to my backyard. These omnivores love sunflower seeds the most, but what do they typically feed their young?

Both male and female cardinals will primarily feed insects to their fledglings. The brood will typically only stay in the nest for two weeks, after which the young will fly away from the nesting area. Interestingly, a cardinal pair will have anywhere from two to four broods in a year. The male cardinal is very territorial and will attack other males found in their vicinity.
2. What is the common name for Strix varia, sometimes called a hoot owl?

On summer evenings, I can frequently hear the beautiful hooting of a barred owl. Barred owls love to eat rodents, crayfish, and crabs. They are very territorial and will even attack humans who get too close to their nests. While the fledglings will start to fly after four to six weeks, the young may hang around the nest for up to six months, an unusually long time compared to other bird species. The barred owl's call sounds like "who cooks for you, who cooks for you all?"
3. Who is this little guy who sings the most beautiful songs? His mate will often join him to form a harmonious duet.

The male Carolina wren learns dozens of song patterns during the first few months of life, and will sing them at any time during the day. The females will also add their voices to the male's song to form a beautiful melody. Studies have shown that a wren's song can vary in intensity based on how big a threat is to the couple or the nest. Wrens prefer to feast on insects, spiders, and even small lizards. They will also eat some vegetation if their first choices are not available. Wrens prefer wooded areas and are typically heard more often than seen.
4. These birds are related to the chickadee and have young ones who will actually stick around and help care for the next brood. What do we call these black-crested birds?

The tufted titmouse loves wooded areas but can also be seen in the suburbs. The female will lay anywhere from five to seven eggs, but sadly most do not survive. The young that do survive will often stick around and help feed the next brood. The omnivorous titmouse eats both insects and seeds. They will frequent the backyard bird feeder or hop along the ground for bugs.
5. Which of the following is NOT a reason why the red-bellied woodpecker will loudly peck at a tree?


Answer: To scare away predators

Woodpeckers will try to hide from a predator or will defend their nest with loud squawks or aggressive behavior. I did learn something new with this question though. I always assumed the woodpecker would peck at a tree to eat bugs, but it goes far beyond that. They also peck at wood, and even metal, to attract the attention of a mate while claiming their territory. Most interestingly, the woodpecker will peck holes in the bark of trees in order to store food for the winter. As for nests, the woodpecker likes to live in already hollowed-out dead trees.
6. Who is this polyglot that is known to sing just about any time of day or night?

The northern mockingbird can imitate hundreds of sounds including those from amphibians and machinery. I once heard a mockingbird screeching like the sound of a bus's air brakes! Mockingbirds are quite territorial and will even defend their nests against humans. They are also prolific; females are capable of laying over a dozen eggs in a season. Mockingbirds are voracious eaters of insects in the summertime making them popular in mosquito country. In the winter they will eat berries, nuts, or whatever they can get their beaks on!
7. Not being a dummy, what is unusual about the eastern bluebird's singing?


Answer: They sing with their mouth shut.

The eastern bluebird will sing with its mouth shut! Crazy, right? They mainly use songs to attract a mate or defend their territory. A male bluebird will find a hole in a tree or a birdhouse before attracting a lady's attention. Then the female does all the work of building the nest and having up to two broods in one season. Bluebirds tend to be monogamous. They love to eat insects, especially mealworms. Yum?
8. Like most raptors, red-tailed hawk females are typically larger than males.

The female red-tailed hawk is typically larger than the male. Their wing span can reach four feet (1.2 meters)! The hawk's screech is a long raspy sound that inspires terror in nearby rodents and cats alike. These raptors have incredible eyesight up to eight times better than a human's.

The males use the ultimately cool gesture to find a mate by catching prey and then tossing it to the female in mid-air. As if to say "there's more where that came from, baby!" Both males and females are fully invested in parenting from the building of the nest to sitting on the eggs while they incubate. One last interesting note, oftentimes in the movies the sound effect attached to an eagle is actually the more menacing screech of a red-tailed hawk.
9. What unusual thing does the colorful American goldfinch do twice a year making it unique among finches?


Answer: They molt their feathers.

The American goldfinch is the only finch to molt its feathers twice a year. During the summer breeding season, the males are a bright yellow color like this picture. During the winter, the males become mostly olive in color. The females also molt twice a year, but their color shifts from light brown to darker brown. Goldfinches do sometimes migrate based on the weather or food supply but rarely more than 1000 miles, 1600 kilometers.

The goldfinch has only one brood per year typically in late July with a clutch of four to six eggs.

They almost exclusively eat seeds classifying them as granivores.
10. Like the mariners of antiquity, which method do ornithologists think indigo buntings primarily use for migration?

Based on several clever studies, it is believed the indigo bunting uses the stars to navigate migration, in particular the North star. Researchers were able to simulate and move star patterns inside a planetarium. They found the bunting would change directions if the stars were moved. When a cloudy sky was presented the birds were often disoriented. Applying or taking away a magnetic field did not measurably change the flight pattern of the buntings, unlike pigeons, which appear to be sensitive to magnetism.
Source: Author BigTriviaDawg


Other Destinations
Explore Other Quizzes by BigTriviaDawg