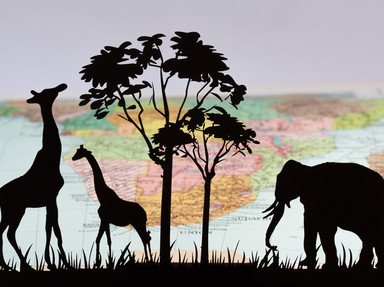 The one thing these animals have is common is being designated "Great". Birds and dogs seem especially likely to be great.

Quiz Answer Key and Fun Facts
1. The great white heron, a subspecies of the great blue heron, can be found in what US State?

While the great blue heron can be found all throughout North America, from Canada through Central America, the great white heron (Ardeah herodias occidentalis) is found only in Florida. The Great White Heron National Wildlife Refuge, created in 1938, is located in the southern part of the Florida Keys.
2. If I'm a birdwatcher looking for a great crested flycatcher, where should I head?

There are 22 species of Myarchus (flycatchers) and most tend to be in the Americas.
3. What country were Great Dane dogs first raised in?

Despite the name, Great Danes were first bred as hunting dogs in Germany. They were known as "Englische hund" (English dogs) although the name was later changed to Deutsche hund (German dog).

The origin of the name Great Dane is actually French, coming from a 1755 natural history text which referred to the dogs as "Grand Danois."

So the dogs could be English, German or French in theory, but have no real connection to Denmark.
4. The Great Danoodle comes from breeding a Great Dane with what other breed of dog?

The Danoodle, like its Great Dane parent, is a large dog, reaching up to 40 inches (just over a meter) tall and up to 130 pounds (59 km). The downside of owning a Great Danoodle is that due to its large size, it tends to have a shorter life span, 8 to 10 years on average.

The poodle has been around since the middle ages, and originated originally in Germany (although some sources say France). It was originally bred as a hunting dog, but now is largely a companion dog. The poodle is a highly intelligent breed and is often cross-bred with other varieties of dogs.
5. Great egrets can be distinguished by bands of what color around their eyes?

Great egrets are majestic white birds with huge wing spans, who have green masks around their eyes. Egrets were almost wiped out in the 19th century, when their feathers were a popular fashion accessory, Thanks to conservationists, egret populations made a major comeback during the 20th century. The egret is the symbol of the Audubon Society.
6. If I wanted to find a great hammerhead shark (Sphyrna mokarran), what would be the best place to go looking?

Hammerhead sharks prefer warm waters, staying in a range between 40 degrees north and 37 degrees south. They can be found in the Atlantic, Indian and Pacific oceans. Great hammerheads are the largest of the hammerhead species, averaging around 12 feet (3.6 meters) in length.

Great hammerheads are apex predators among sharks, and do feed on other sharks. Although their favorite food is sting ray, which they stun with their heads.

While great hammerheads are rarely a threat to humans, the reverse cannot be said. Hammerheads are severely threatened due to fishing for their fins to make soup, a delicacy in China.
7. If you see a Great Plains rat snake (Pantherophis emoryi), you should run away as it is very dangerous.

Unless you are a bird or lizard, this statement is false. Great Plains rat snakes are non-venomous, and kill their prey through constriction.

The snake is named after Brigadier General William Hemsley Emory, a surveyor with the US Army Corps of Engineers. He collected several specimens of the snake and gave them to the Smithsonian when he got back to Washington.

Yes, the snake is technically not "great" as it named after the place it comes from.
8. If I am in search of a great potoo bird (Nyctibius grandis), where should I travel to?

Potoo birds are native to the Americas, from Mexico to Ecuador and Brazil, Potoo birds are known for their large heads. They come in white, gray, black and burgundy and are roughly 19 to 24 inches (48 to 61 cm) tall and weigh around 18 ounces (510 g).

Potoo birds use their feathers as camouflage, to disguise themselves from larger predators such as hawks. While the birds are occasionally used as a food source, they do not have much meat, so are not very popular eating.
9. While known as the Great Pyrennes in the United States, what is the dog breed known as in its native France?

The Great Pyrenees is known as the patou. The breed is very ancient, first appearing in the Middle East almost 10,000 years ago. Shepherds in southern French have been using them as herding dogs for around 3000 years.

The Great Pyrenees is a large dog with a heavy double white coat. They are fairly independent, as they were bred to herd sheep on their own. Because of this, Great Pyrenees are highly protective of their owners and make excellent watch dogs.

Caniche is French for poodle. Teckel is a dachshund. A phalene is a French variation of the papillon.
10. Carcharodon carcharias is the great white shark. Which are larger, male or female great whites?

Steven Spielberg made great whites infamous with his 1975 film "Jaws." While much of the film is accurate, including the story of the USS Indianapolis, great whites are not quite as deadly as the film would make out. In an average year, there are around ten great white shark attacks. The average for all shark attacks from 2016 to 2020 was 72 per year, for all varieties of shark.
Source: Author parrotman2006