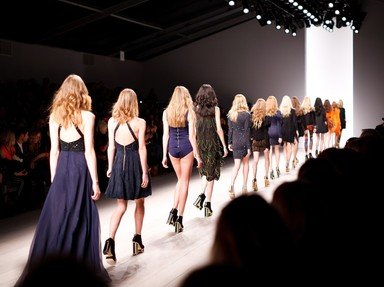 In the hectic and stressful world we live in, there's nothing like a little luxury to make one feel pampered. These brands all provide that. However, what are they most known for? Clothes, shoes or jewellery? Sort the brands into the correct category.
This is a renovated/adopted version of an old quiz by author Albynoe

Versace, or Gianni Versace s.l.r. to give it its full name, is an Italian fashion empire which ranges from the exclusive haute couture dress collection through ready-to-wear to accessories and homeware. The brand, beloved of both royalty and celebrities, is known for its glamorous, exotic and cutting edge designs. Who will ever forget "That Dress", the black silk and lycra dress held together by oversized gold safety pins, worn by Elizabeth Hurley in May 1994 to the London premiere of the film "Four Weddings and a Funeral"? It epitomizes the style and flair of the Italian brand.

Versace was founded by Gianni Versace in 1978 and he opened his first boutique on the Via Della Spiga in the fashion capital of Italy, Milan, together with his brother, Santo, and his sister, Donatella. By the time Gianni Versace with gunned down outside his Miami Beach home, Casa Casuarina, at the age of 50 on 15 July 1997, his fashion empire stretched across the globe with over 125 boutiques and was a renowned luxury fashion brand. On his death, his sister, Donatella, took over as Head of Design. In 2018, the Michael Kors Group became the majority shareholder of the company.
2. Cartier

"Never imitate, always innovate." Taking its cue from the motto of its founder Louis-Francois Cartier, the venerable jewellery house of Cartier has been producing exquisite jewels and timepieces since the first shop opened in Paris in 1847. It was a favourite of royalty, receiving its first Royal Warrant from Britain's King Edward VII in 1904. The other royal courts of Europe followed suit. It was Cartier's three grandsons, Louis, Pierre and Jacques, who took the company global when each took on a different market, Louis in Paris, Pierre in New York and Jacques in London. The New York flagship store is the famous Cartier townhouse on Fifth Avenue which was acquired by Pierre Cartier in exchange for a single pearl necklace said to be worth over one million dollars at the time.

From its first wristwatch produced for Alberto Santos-Dumont in 1904, the company has been known for its classic timepieces. The iconic Tank Watch made its first appearance in 1917. Yes, the design was inspired by a real tank, in case you were wondering. Cartier is also responsible for the fabulous Taylor-Burton Diamond Necklace bought by Richard Burton and Elizabeth Taylor in 1969. The company remained under family control until 1964 when it became a subsidiary of the Richemont Group, the Swiss based luxury goods conglomerate.
3. Christian Louboutin

Christian Louboutin's handcrafted shoes with their vertiginous heels and signature shiny lacquered bright red soles are indisputably one of the world's luxury items and can found gracing the feet of well-heeled (excuse the pun) women around the world. Louboutin started out working for two of France's top shoe designers in Charles Jourdan and Roger Vivier. In 1991 he struck out on his own and opened his first boutique in Paris. His first customer was Princess Caroline of Monaco and the word soon spread. From 200 pairs sold in the first year, sales climbed to around 700 000 in 2012 as women flocked to buy these beautiful creations. Although the company does offer lower heeled styles, it has become known for its stilettos with heels that start at a foot aching 4.7 inches in height. As for the red sole. Therein lies a tale told by the master himself. In 1993, Louboutin was frustrated by a design that didn't seem to translate from paper to shoe and he impulsively grabbed a bottle of his assistant's bright red nail varnish, painting the sole of the shoe with it. And so a legend started.

Although the company has since branched out into accessories such as handbags and belts. 95% of its sales come from shoes. In 2021, Louboutin sold a 24% stake in the company to the Dutch owned Exor N.V. company.
4. Tommy Hilfiger

The logo is proudly red, white and blue. Tommy Hilfiger, the eponymous company founded by the Elmira, New York born designer, branded itself from the start as the "Pioneer of American Cool". Starting with a single menswear line in 1985, it has grown to be one of the biggest and most recognizable American fashions brands in the world with nearly 2000 retail stores worldwide. The company was the brainchild of the American fashion designer, Tommy Hilfiger, and the Indian businessman, Morhan Murjani. Hilfiger was looking to design under his own label and Murjani was looking for a designer to back so a deal was concluded. The brand was launched with a splash; a huge billboard in Times Square which didn't go down too well with the established fashion crowd. No matter. The American peppy with a slight edge look became the go-to style and sales rocketed.

In the 1990s, the brand took on a different slant when oversized versions of its designs became the favourite of the young hip-hop/rap culture. A famous example is when Snoop Dogg wore a TH t-shirt on his "Saturday Night Live" appearance in March 1994. In 2010 the company was bought by the Phillipps van Heusen Corporation which also owns the Calvin Klein brand, although Tommy Hilfiger continued to steer the design course.
5. Mikimoto

Kokichi Mikimoto's dream was "to adorn the necks of all women around the world with pearls". When, in 1893, this Japanese vegetable vendor succeeded in producing the world's first semi-spherical pearl cultured from an Akoya pearl oyster, he took the first step in making pearls more accessible to women as natural pearls were both rare and expensive. In 1899, he founded the Mikimoto Pearl Company and opened the first Pearl Shop in the fashionable Ginza District of Tokyo. Initially there was resistance to the concept that cultured pearls were "real" pearls and not imitations. A meeting with Thomas Edison who famously declared that "cultured pearls were real pearls" helped establish both credibility and sales. Today it is accepted that Mikimoto is one of the world's luxury brands known for superior craftsmanship and creative design.

There is a small island in Ise Bay in Toba, Japan, called Mikimoto Pearl Island which is owned by the Mikimoto Pearl Company Museum. In this museum resides the "taisho-ren" or "Boss's Necklace". It is the first single-strand pearl necklace produced by Mikimoto. It consists of forty-nine perfectly-matched cultured pearls hand chosen by the Pearl King himself.
6. Manolo Blahnik

Manolo Blahnik International Limited is one of the world's legendary shoe brands that has been favoured by celebrities and royalty since it was created by by its Spanish founder and designer, Manolo Blahnik Rodriguez in 1970. From the first boutique in Chelsea, London, the brand has become synonymous with luxurious and well-crafted footwear. Blahnik's career in shoe design came about about after a meeting with the then editor in chief of American Vogue, Diana Vreeland, who on seeing some of his sketches, urged him to pursue this line of design.

In the 1970s women's footwear fashion was dominated by clunky platform shoes. Blahnik changed this when he introduced the iconic BB Pump which made sleek, high heels fashionable again. The brand was catapulted to global fame when the shoe-mad character Carrie Bradshaw from the TV show "Sex and the City" declared that she was obsessed with Blahnik's creations.

In 2008, he launched the Hangisi range which has become his signature creation. Each shoe in this range sports a square crystal Swarovski buckle on the front. Catherine, Princess of Wales, wore an emerald pair of Hangisi pumps for her first official portrait with Prince William.
7. Harry Winston

It is perhaps fitting that Harry Winston, founder of one of the world's most famous jewellers and known as the "King of Diamonds", was the person who donated one of the world's most famous diamonds, the notorious blue Hope Diamond, to the Smithsonian Institute in 1958. New York born Harry Winston opened Harry H. Winston Jewels Inc. in 1932 before changing the name in 1936 to Harry Winston Inc. This company would become known as the "Jeweller to the Stars" and would handle some of the most famous gemstones in the world including the Napoleon Diamond Necklace, the Star of the East, and the fabulous 726 carat Jonker Diamond. Harry Winston was the first jeweller to lend diamonds to an actress for the Academy Awards when, in 1943, Jennifer Jones wore one of his creations to the ceremony. The company specialized in buying outdated jewellery from estates and then re-cutting and resetting the precious gemstones they contained.

The company passed out of family hands in 2013 when it became a subsidiary of the Swiss Swatch Group. However, it still remained one of the most prestigious jewelers in the world acquiring rare and fabulous gemstones, namely the 101-carat Winston Legacy in 2013 and the rare Winston Blue the following year.
8. Aquazurra

A relative newcomer to the luxury shoe market, the Italian company Aquazurra makes as many waves as its name, meaning "blue water", suggests. Founded in 2011 by the Colombian born shoe designer, Edgardo Osorio, and his partner, Ricardo D'Almeida Figuerido, the brand is being snapped up by those who want sassy, but still comfortable shoes. Orsorio, on noticing at functions, how women would take off their shoes before dancing knew that there was a market for a shoe that was both beautiful and didn't make their feet ache so each Aquazurra shoe has a cushioned instep.

The brand is based in the Palazzo Corsini in Florence and every shoe has a signature, a distinctive little 3D gold pineapple stamped on the sole. This idea comes from the old Italian tradition of placing a pineapple in the doorway of a house to ensure prosperity. Orsorio said that "he likes the idea of sending his Aquazurra ladies out with a lucky charm under their feet".
9. Saint Laurent

Yves Saint Laurent SAS, or simply YSL, is the luxury fashion brand that has sprung from the couture house started in 1962 by the French designer, Yves Saint Laurent, and his partner, Pierre Berge. Saint Laurent was the first haute couture house to offer a pret-a-porter or ready-to-made range when he opened the first Rive Gauche boutique in Paris in September 1966. Saint Laurent is credited with making the wearing of trousers popular for women. 1966 saw the introduction of what would become Saint Laurent's iconic garment; 'Le Smoking', a black tailored tuxedo specially tailored for women, which has remained, in various guises, a mainstay of the YSL brand. Funnily enough, only one haute couture version of this suit was ever sold, but the Rive Gauche version flew off the shelves as a younger generation of women took to the modern style.

In 1999 the company was acquired by the multinational Kering Goods Corporation and became part of their stable of luxury brands, although Saint Laurent himself remained the designer for the haute couture collection until his death in 2002.
10. Tiffany & Co

Oh my! The sight of the little robin egg blue box tied with a white satin ribbon is enough to make most women go weak at the knees. The box has become the symbol not only of Tiffany & Co, the jewellery and luxury goods company started by Charles Lewis Tiffany as Tiffany and Young in 1837, but of luxury and exclusivity. The boxes are not for sale at any price. In 1886, Tiffany's changed the way engagement rings were made when it introduced the "Tiffany Setting". This setting lifted the gemstone away from the band by means of six prongs which showed the stone off in all its glory so popularizing the concept. It was also the year in which the famous Tiffany Yellow Diamond was purchased. This beautiful 128.54 carat stone can usually be seen on display in the company's flagship store on the corner of Fifth Avenue and 57th Street, its home since 1940. This is the storefront so familiar to many from the 1961 movie "Breakfast at Tiffany's".