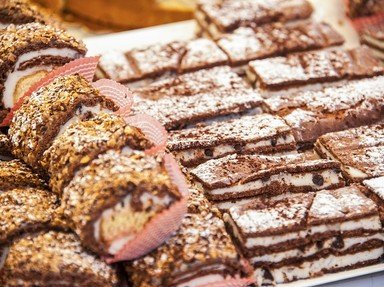 Italy has a diverse range of decadent desserts and pastries to finish your meal. Enjoy this taster plate of sweet treats.

Quiz Answer Key and Fun Facts
1. The Italian treat of struffoli is a mound of fried dough balls traditionally flavoured with which sweet substance?

Struffoli, whose name comes from the Greek word for "rounded", was first described around the mid 4th century BCE by the Greek Poet Archestratus. They are traditionally a Neopolitain speciality though versions exist in other places.

Also known as honey balls, struffoli is made from an Italian sweet dough, which is rolled into small balls and deep fried. They are then mixed with honey and formed into a large ring or mound for serving. Honey is the traditional flavouring, but nonpareil sprinkles, cinnamon, candied fruits and nuts can be used.

Phoenix Rising's leith90 thinks struffoli is too nice to only have once a year.
2. Hailing from the Campania region in Italy, which delicate-looking pastry is quite similar to, and sometimes called "lobster tail" in the US?

Sfogliatelle is an Italian handheld pastry. Meaning "little leaves". Sfogliatelle starts by forming a log of dough, then cutting the ends of the log. Once cut and baked, the layers begin to separate and the flaky layers or leaves appear. A light dusting of sugar tops off the handheld pastry.

With its beginnings in a Santa Rosa convent in the 17th century, the filling for this pastry was originally made from leftover semolina, ricotta, dried fruit, and lemon liqueur and was added to two sheets of dough that had been stretched after mixing with white wine and lard. The shape was to resemble a monk's hood and was termed "Santa Rosa", sometimes read as "santarosa". It was typically topped with pastry cream and black cherries. Photos of the unbaked pastry do resemble a monk's hood or clamshell.

Sfogliatelle is also Neapolitan delight! There are a few types of this dessert. "Sfogliatelle riccia" which is the original curly, layered version. "Sfogliatelle frolla" has the same flavor profile but does not use the same dough so it does not have the characteristic curling of the layers when baked. "Coda d'aragosta" uses the same dough as the "riccia" version but adds a sweeter, whipped cream and the shape is rounded like a lobster tail once baked.

This question was baked into the Red Crew's team quiz by jaknginger.
3. Tiramisu is one of Italy's most famous desserts. What kind of cheese is used to give it its signature creamy texture?

Savoiardi (ladyfingers), coffee, eggs, sugar and mascarpone are the principal ingredients in a traditional tiramisu and then alterations can be made according to preference. Alcohol in the form of masala wine, amaretto or a coffee liqueur is a popular touch. Cocoa is generally used to sprinkle on the top.

There are, of course, different opinions as to the origins of tiramisu, or 'pick me up'. Recipes do not appear in cookbooks prior to the 1960s. Treviso restaurant "Le Beccherie" is reputed to be where the dessert first appeared in 1969. The creators may have been Alba di Pillo, the wife of the restaurateur, in conjunction with pastry chef Roberto Linguanotto. Other sources state it may have been Carminantonio Iannaccone, a local baker who claims to have supplied "Le Beccherie" restaurant with the first tiramisu.

A semi frozen dessert called "Tiremesu" can be traced to 1938 in the "Vetturino" restaurant in Pieris, but the layers of modern tiramisu have more in common with Zuppa Inglese, an Italian trifle-like dessert made from sponge cake and custard.

A request to give tiramisu protected status certification has been put forward, so that the dish remains as traditional as possible and that desserts containing non common ingredients, such as strawberries or lemon, are not referred to by the name.

Red Crew's smpdit remembers her first taste of tiramisu in a restaurant in Woolwich, England in the 1980s. It wasn't long before a return visit was suggested.
4. Cannoli is derived from an Italian word for little tube. These tubes are filled with sweet fillings such as ricotta, fruits, spices and nuts. What is the tube made from?

Cannoli are Italian pastries, although in Italy they are called Sicilian cannola. Cannoli (meaning little tube) is a single pastry while the plural (because no-one can only eat one cannoli) is cannolis, whilst cannoli as singular or plural is acceptable.

Circular pastry rounds 8-10cm in diameter are curled around a cannoli mould and deep-fried. Once cooled, they are stored empty, filling just before serving to keep the pastry crisp. The filling can cover a whole range of tastes, but it is always based on ricotta and nearly always has cream and cinnamon folded through the mixture.

This question was written by 1nn1 of Phoenix Rising who has fond memories of walking down Bleeker St in Manhattan, filling up on hot coffee and fresh cannoli from a local Italian pastry shop because he was told "Don't forget the cannoli".
5. Which of the following ingredients is NOT usually included in preparation of panna cotta?

Panna cotta is often considered a classic Italian dessert, but history does not support this designation. The exact origin of panna cotta is unclear, lost in the mists of time, but it didn't become popular until the second half of the 20th century. The Piedmont region is cited as the place of origin.

The name "panna cotta" means "cooked cream," and that is the major ingredient along with sugar. Flavorings such as vanilla or coffee may be added. Bavarian cream and other custard desserts add eggs, but authentic Italian panna cotta does not. Panna cotta is served either, still in the ramekin or unmolded.

Saba, a grape product (an early step in balsamic vinegar production) that is nonalcoholic, is one traditional topping. Berries or berry coulis may be placed on or under the panna cotta.

Player pusdoc of Phoenix Rising's Red Crew makes a mean panna cotta, and will never forget her first taste of one in a restaurant between Siena and Florence.
6. Cantucci, from the old Italian word meaning "little place", is the original name for which hard, almond-flavoured biscuit?

Biscotti, also called cantucci, is a twice-baked almond-flavoured biscuit that was created in Tuscany. The original treat, "Biscotti di Prato", was created in the city of Prato by pastry chef Antonio Mattei, whose early 19th century recipe is accepted as the traditional biscotti.

The yeast-less biscuit is first cooked in a slab or log shape, then sliced and re-baked to dry out, forming a dry, crunchy biscuit. They are made to be eaten after dipping in a drink. Traditionally they are served with a dessert wine, but outside of Italy, tea or coffee is the preferred beverage.

While the traditional biscotti features almonds, modern versions can incorporate different nuts, fruit or even chocolate into the mix.

Phoenix Rising's leith90 tried biscotti when she was young, but sadly wasn't allowed the coffee or wine to dunk it in.
7. Which Milanese sweet bread dessert, studded with dried fruit, is generally eaten at Christmas time?

Panettone is made using a long proofing, similar to the sourdough process, resulting in a mildly acidic dough, enriched with candied peel, lemon zest and raisins. Chocolate versions also exist. Panettone is tall, have a domed (cupola-shaped) top and have a soft and airy texture. It is often consumed with sparkling wines.

Panettone originated in Milan and is first mentioned in 1599 in the records of the Borromeo college in Pavia, just outside Milan. In 1919 Angelo Motta, a Milanese baker was responsible for increasing the proving time to produce the more recognisable tall, domed shape expected today.

All the treats listed are sweet breads and most are popular at Christmas time, except for Schiacciata di Pasqua, which is an aniseed flavoured, light, fluffy loaf which is more associated with Easter.
Pandoro is a golden, egg-rich, leavened sweetbread, very similar to panettone, but doesn't contain the dried fruit and peel. Torte Della Rose is a beautiful representation of a bouquet of roses crafted from buttercream filled, yeasted rolls.

Red Crew's smpdit, is a fan of panettone, and also has a collection of the wonderful tins they are often sold in.
8. What delicious Italian dessert is a ball of gelato with a hidden center?

Tartufo means "truffle" in Italian. It is a ball of gelato, typically two flavors, formed by hand around a fruit, chocolate, or syrupy center. It is then either dipped or rolled in chocolate or rolled in cinnamon or cocoa or nuts (if they are small enough pieces). The tartufo is then frozen to set for later consumption. Picture this: a gelato truffle!

Tartufo is not an ancient treat. It was around 1952 that tartufo was created in Pizzo, Calabria. It was created by chance! A confectioner named Giuseppe De Maria, also called Don Pippo, did not have enough gelato molds for a wedding party. He created these gelato balls, and they were huge hit! He had instant fame, so much so "Tartufo di Pizzo" has a PGI (protected geographical indication) in Italy!

Gelato is the Italian word for ice-cream, but outside Italy, it refers to the specific Italian variety that is generally denser and richer than ice-cream produced anywhere else.

Jaknginger thinks gelato and ice cream can solve many life problems.
9. A Zeppole is an Italian dessert that is similar to what popular bakery item?

Traditionally eaten on St Joseph's feast day on the 19th of March, zeppole are fried pastries similar to a doughnut. Made from ricotta cheese, flour, eggs, salt, sugar, baking powder and vanilla, the resulting dough is spooned into hot oil and fried until golden, then tossed in sugar. Where doughnuts often have a filling of some kind, with zeppole the filling becomes a topping. Custard, jam (jelly) pastry crčme, which is often seen as a cannoli filling, or a mixture of butter and honey are popular toppings.

Zeppole have a long history in Italy, its origins hailing from Ancient Rome, the modern version dates back to the 18th century.

Sardinia has a similar item, called tzipulas, which are sometimes also called zeppole or zippula, but they are more of a funnel cake and are eaten to celebrate carnival.

Phoenix Rising's Red Crew's smpdit had a 'Homer Simpson' moment creating this question.
10. Which of the following is most traditionally added to flavor zabaglione?

Zabaglione (also spelled zabaione) is a light, frothy sweet made with egg yolks whipped with sugar and sweet wine. Marsala or Moscato d'Asti are most commonly used, with Vin Santo or cognac the occasional substitute. While the recipe has been known since the 15th century, as with many classics, the origin is disputed. In France, it is called sabayon.

After whipping the eggs and sugar in a glass or thick metal bowl, it is placed over steam to cook while still being whisked, either by using a bain-marie (bagno maria in Italian) or a boiling saucepan.

Traditionally served in glass bowls, it may be served in a china bowl, or, as in the US, in a champagne coupe with berries. It is delicious atop cake or panettone, or by itself with some biscotti alongside.

Player pusdoc enjoyed many a zabaglione while listening to the opera singers at New York's Asti restaurant as a child
Source: Author leith90