All in a Day's Work Trivia Quiz

In many of her films, actress Doris Day exemplified the spirit of the New American Woman: competent, confident, yet feminine. This was apparent in the occupational and professional roles she portrayed. How many of these can you identify?

Share on Facebook
Share on Twitter
Share by E-Mail
Author
FatherSteve
Time
5 mins
Type
Multiple Choice
Quiz #
337,119
Updated
Jul 23 22
# Qns
10
Difficulty
Average
Avg Score
7 / 10
Plays
504
Awards
Top 35% Quiz
This quiz has 2 formats: you can play it as a or as shown below.
Scroll down to the bottom for the answer key.

Quiz Answer Key and Fun Facts
1. In the first of three movies with Rock Hudson, Doris Day plays Jan Morrow opposite Hudson's Brad Allen in "Pillow Talk" (1959). He is a womanizing song writer who disguises himself as shy Texan, Rex Stetson, to win her heart. What is her occupation in this film?

Her career as an interior decorator figures significantly in the film as, at one point, he asks her to redecorate his apartment and she, having discovered his subterfuge, complies but with a gaudy horrid design, as revenge. For this picture, Day was nominated for Best Actress at the Academy Awards and for Best Motion Picture Actress in a Musical or Comedy at the Golden Globe Awards, winning neither.
2. Doris Day, playing Kitty Wonder, co-stars with Jimmy Durante, as Pop Wonder, in "Jumbo" (1962). This, the last of her musicals, features songs by Richard Rodgers and Lorenz Hart. What is her occupation in this film?

In this movie, Kitty Wonder struggles to keep her circus afloat, despite her father's gambling debts and a take-over attempt by a competing circus. Jumbo is the elephant who figures significantly in the plot. Novelist Sidney Sheldon and playwright Ben Hecht contributed to the script.
3. In "Julie" (1956), Doris Day is married to concert pianist Lyle Benton, played by Louis Jourdan. Lyle killed her first husband in order to marry her and now is trying to kill her. She runs away and returns to her former occupation. What is it?

Julie's work as a stewardess (which is what flight attendants were called in 1956) somehow qualifies her to fly an airliner after Lyle kills the pilot and wounds the copilot. Day actually took flying lessons to prepare for her role. "Julie" was shot extensively on the Coast of California near Monterey, where Doris Day would settle once she retired from films and television.
4. In her last feature film, Doris Day played Abby McClure in "With Six You Get Eggroll" (1968). She is the widowed mother of three who falls in love with Jake Iverson, played by Brian Keith. Melding their families proves a challenge. What is her occupation in this film?

Abby efficiently runs the family lumber business left to her after her first husband's death. There is a split-screen scene in which Abby and Jake are each in their own beds, which is director Howard Morris' homage to the split-screen bathtubs scene in "Pillow Talk". Alice Ghostley, who plays Abby's housekeeper, was a success on Broadway, on television ("Bewitched", "Mayberry R.F.D.") and in film ("To Kill a Mockingbird").
5. Doris Day plays Erica Stone, opposite Clark Gable as James Gannon, in "Teacher's Pet" (1958). This battle-of-the-sexes movie is supported by Gig Young as Dr. Hugo Pine and Mamie Van Doren as Miss Peggy DeFore. What is Erica Stone's occupation in this film?

"Teacher's Pet" is the only film in which Doris Day and Clark Gable were paired, alas. The conflict is between her scholarly classroom approach to journalism and his hard-hitting experience as a city desk editor without formal education. Gannon goes undercover as a student in her class to show her up. Romance ensues.
6. With Peter Graves and George Kennedy, Doris Day stars in "The Ballad of Josie" (1967). Josie Minick finds herself widowed and beset with problems when her husband comes home drunk, falls over a banister and dies. With remarkable spunk, she overcomes all. What is her occupation in this film?

Josie Minick first attempts to raise cattle and then, that failing, sets herself to raising sheep, all against a backdrop of male ranchers who attempt to persuade her that ranching is no job for a mere woman. While Day did not think this to be one of her better films, it was especially popular with feminist audiences.

Some movie critics suggested that it was a remake of Day's "Calamity Jane" (1953), only without music.
7. Adapted from a Broadway musical, "Pajama Game" (1957) stars Doris Day as Babe Williams, with John Raitt and Eddie Foy. In the movie, Day replaced Janis Paige of the original Broadway cast in the lead. Nelson Riddle did the score; Bob Fosse did the choreography. What was Doris Day's job in this film?

This is a story about a strike in a garment-making plant. Babe Williams is a sewing-machine operator who is the chair of her union's grievance committee. This brings her into conflict with factory superintendent Sid Sorokin (John Raitt). A satisfactory negotiated settlement results, as does true love.

The film features three hit songs: "Steam Heat", "Hey There" and "Hernando's Hideaway". The Broadway production won the 1955 Tony Award for the Best Musical.
8. Doris Day is paired with Rock Hudson for the second time in "Lover Come Back" (1961). She plays Carol Templeton to his Jerry Webster. The supporting cast includes Tony Randall, Edie Adams and Jack Oakie. As in "Pillow Talk", Hudson's character resorts to impersonation to win the heart of Carol Templeton. What is her occupation in this film?

Day plays an educated, ethical advertiser against Hudson's sex-sells unscrupulous advertiser in this film. Carol Templeton believes in market research and in bringing genuinely improved products to consumers. Jerry Webster uses the sex appeal of Edie Adams to market a not-yet-existent product. Day won the Laurel Award for the Top Female Comedy Performance for this movie.
9. In "The Glass Bottom Boat" (1966), Doris Day plays Jennifer Nelson, Arthur Godfrey plays her father, and Rod Taylor plays Bruce Templeton, her love interest. In this movie, she is suspected of being a spy for the Russians; what is her actual occupation?

Security is tight at the space laboratory where Bruce and Jennifer both work: him as a scientist and inventor and her as a tour guide and writer. They connect when he asks her to help him write his autobiography. The confusion begins when Jennifer is overheard talking to Vladimir on the telephone; Vladimir turns out to be her dog ... but his name sounds like that of a Russian spy. One of the best scenes in the film is where she sings "Que Sera, Sera" accompanied only by Arthur Godfrey on his ukulele.
10. In 1959, Doris Day starred in "It Happened to Jane", a comedy in which she plays Jane Boyd Osgood and co-stars with Jack Lemmon (the good guy) and Ernie Kovacs (the heavy). Lemmon plays an interesting role as an attorney running for public office. What is Jane Osgood's occupation in this film?

The story is of a small-town businesswoman who runs a mail-order company which sells live Maine lobsters. When a railroad company delays a shipment of her lobsters, resulting in their demise, she sues the corporate giant and wins. In an act of unfair play, the railroad threatens to reroute its trains around the small Maine town in which she lives, thereby cutting its business connection to the rest of the country.

She is championed by her lawyer-politician boyfriend George (Jack Lemmon) and it all works out well in the end.

This film is the only pairing of Day and Lemmon, which is unfortunate, given the chemistry.
Source: Author FatherSteve

This quiz was reviewed by FunTrivia editor skunkee before going online.
Any errors found in FunTrivia content are routinely corrected through our feedback system.
Most Recent Scores
Dec 16 2022 : Guest 175: 4/10
Dec 08 2022 : dmaxst: 6/10 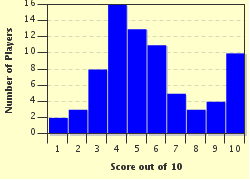 Related Quizzes
This quiz is part of series Movie Miscellany:

These quizzes are all about the movies but are remarkably diverse in terms of specific aspects of filmdom.