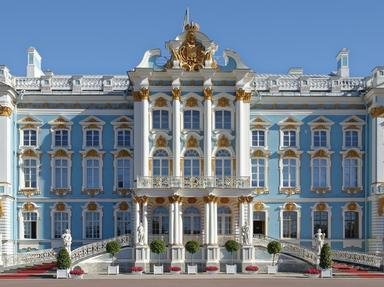 Come learn a bit about some Russian royals. They are legendary for both positive and negative acts and have definitely made their mark on the annals of Russian history.

Quiz Answer Key and Fun Facts
1. Ivan the Terrible created a tightly controlled Russian state and attempted to conquer many lands. What class of citizens, through fear and brutality, did he especially target?

Ivan Vasilyevich was born in Moscow in 1530, and grew up surrounded by backstabbing friends and family treachery. He became Tsar Ivan IV in 1547, and began a short-lived period of law and church reform. He spent the 1550s conquering neighboring lands and maintaining harsh control at home with strict police forces.

In 1560, his wife died and Ivan believed the boyar class (feudal nobility) was to blame. Thus he started a 24 year reign of terror and earned his name "Ivan the Terrible". He not only destroyed boyar families but even, it is reported, killed his own son.

He died of a stroke in 1584, leaving his country in chaotic shambles.
2. Boris Gudunov basically controlled Russia behind a feeble Tsar Fyodor I before he was tsar himself beginning in 1598. Although he tried to help the country, things did not go as planned. When Boris died in 1605, what was the then-current era being called?

Boris Godunov began his career when he serviced Ivan the Terrible and was named guardian for Ivan's son Fyodor, who had mental difficulties. When Fyodor ascended to the throne, Boris ran the country from behind the scenes. He began a series of programs to aid defenses, colonize areas, and help churches. When Fyodor died in 1598, Boris was elected to the throne. He continued his benevolent policies until a man, claiming to be a lost prince and son of Ivan, tried to take the throne. Boris and his army repelled him, but the seeds of discontent and doubt were sown.

Famine and epidemics also occurred during this time and when Boris died suddenly in 1605 the years were being called "Time of Troubles". These years of political and social crises did not end until 1613, a period of 15 years when the crown changed over six times. The story of Boris' life and his reign was the subject of a play and opera in later centuries.
3. Michael of Russia became tsar in 1613 at the young age of sixteen. Under his reign, multiple reformations were completed. He is probably best known, however, for being the first tsar of what Russian dynasty that lasted until 1917?

Michael Romanov was elected tsar in 1613 due to his distant relation to Ivan the Terrible. He was 16, poorly educated, and living in a nunnery with his mother when he reluctantly took the title. For the first several years, he worked at peace relations with Sweden and Poland.

In 1619, his father was released from bondage and joined him to help make decisions. They worked on continued ties with Europe, added strength to the serfdom, and tried to solve the financial woes of the country. Through Michael's children and descendants the long rule of the Romanov dynasty began and did not end until 1917.
4. Peter the Great ruled Russia from 1682 until 1725, and instituted a series of reforms that brought his country into one of the leading powers of the time. What event most helped shape Peter's destiny?


Answer: His travels to the West

Pyotr Alekseyevich, known as Peter the Great, was only four when his tsar father died. Peter was sent to live in a small village near Moscow while his half sister was made regent. Out of the public eye, Peter quickly learned both books, useful skills, and interactions with different cultures. At 17 he was wedded as a political gesture and the marriage quickly failed. In 1689, he overthrew the throne and became tsar. Soon he began trips to western Europe which would influence him greatly.

His first trip to London and Amsterdam changed fashion in Russia, encouraged him to build a navy, and prompted him to move the capital to St. Petersburg from Moscow. In the early 1700s he led his armies to several decisive victories, gaining lands. In 1717, he traveled again to the western area, and spent considerable time in France. This aided relations in the country and brought a new sense of art and culture back to Russia. His forceful personality and amazing breadth of knowledge brought a whole new climate to his fatherland. He died in 1725 of internal gangrene and left his second wife to rule.
5. Elizabeth Petrovna was empress of Russia from 1741 to 1761. Under her artistic reign, the country's prestige as an international power grew. What royal residence, on the Neva River, did she have renovated to unbelievable grandeur?

Elizabeth was the daughter of Peter the Great and Catherine I and played a minor role during the reign of her cousins. However, when she was threatened with banishment to a convent, the beautiful 32 year old princess helped stage an overthrow in 1741 and proclaimed herself empress. She tried to restore the Senate and government in line with her father's old ideas and relied on her advisers to form new policies. She loved education and art and founded Russia's first university.

In 1754, she began a renovation of the Winter Palace that would take 4,000 people eight years to finish the 460-room palace. It soon became well known for its absolute luxury. During the last several years of her reign, the country became involved in the Seven Years' War against Prussia. She died of a stroke in 1762 leaving behind national monuments and a popular reputation.
6. Catherine the Great reigned for over thirty years, from 1762 until 1796. An extremely charismatic woman, she left behind a more enlightened and geographically larger Russia. How did she obtain the throne?


Answer: Usurped it with her lover's help

Catherine was born Sophie Auguste and was the daughter of an obscure German prince. She was, at age 14, chosen to be the wife of the heir to Russia through her mother's side of the family. The marriage was a disaster and her husband was not favored by the current monarch, Elizabeth. When her husband took the throne and threatened to kill her, she and her lover, Griegory Orlov, planned and executed an overthrow and she was crowned in 1762.

For the next 34 years, she worked to expand the geographical footprint of Russia, correct the financial situation, spread enlightened thinking through the land, and build hundreds of new towns. Her private life, full of lovers up to the time of her death, fueled rumors back then and continues to spawn movies and stories today. She suffered a stroke and passed away in 1796 while leaving her name and actions to posterity.
7. Alexander I, grandson of Catherine the Great, led Russia from 1801 until 1825. He had planned to devote his reign to peace. Ironically, he would best be known for war. What European ruler did his army defeat in June of 1812?

Aleksandr Pavlovich was taken from his father, Pavel, by Catherine the Great to raise as the next monarch. He was brought up with teachers from the Age of Enlightenment and taught military tactics by army officers. Catherine died before she could name him the heir, and, when his father was assassinated in 1801 then Alexander came to the throne. He strove for peace and tried to make many administrative improvements. He tried to maintain strong alliance with Europe, but Napoleon disagreed.

Their brief friendship did not last and soon a series of battles and treaties ensued. It all culminated on June 24, 1812 when the Russians drove Napoleon from Moscow and started his ultimate downfall. His last few years in office showed him with an intense devotion to religion and suffering of deep bouts of depression. He died of pneumonia in 1825.
8. Nicholas I ascended to the throne in 1825 and ruled for thirty years. True or False: He was known as a forward thinker, much beloved, and often compared to his grandmother Catherine the Great.

Nikolay Pavlovich was the much younger brother of Alexander I and grew up in a very strict upbringing. His education was extensive but relied on strict discipline and order. Nicholas very much enjoyed the military and any exercises around that institution.

After his brother's death and several rebellions, Nicholas came to the throne. He was extremely autocratic and used aggressiveness to solve most problems. He spent the next two decades focused on militarism and bureaucracy. Not wanting to rock the boat, Nicholas did little to any kind of reformation of the country.

In 1855, exhausted, he died of pneumonia. For his lack of reactionary policies, he has been labeled the "emperor who froze Russia for thirty years".
9. Alexander II, who ruled from 1855 to 1881, is known for many things, one of which involves William Seward. When Alexander II sold the land in 1867, at the price of $7.2 million, what US state did it turn out to be?

Alexander II was the eldest son of Nicholas I and was raised more by a series of tutors than his parents. When his father died, during the period of the Crimean War, Alexander II succeeded to the throne. His first task was to improve communications in his country, focused upon railways. He also signed an Emancipation Act in 1861 that freed millions of serfs. This greatly helped the psych of much of the nation but began to erode the economic stability of the country. He also improved the judicial system in Russia.

During these reforms, he fell in love with a very young girl and lost focus of many of his duties. In 1867, he met with Seward, and without many of his countrymen knowing, sold the land that would become Alaska to the United States. He died in 1881 of a bombing assassination. Known as the "Emancipator" of Russia, his reforms also helped lead to an eventual revolution.
10. Nicholas II was the last Russian emperor and served from 1894 until 1917. This man, who believed his authority was derived from God, found a populace unwilling to follow that dogma. What happened to him after he abdicated the throne in 1917?


Answer: He and his family were executed

Nicholas II was crowned tsar in 1896. Grandson of Alexander II, he enjoyed the military life and preferred privacy rather than the limelight. He was extremely devoted to his wife, Alexandra, and their children. Rather than relying on his own judgement, he sought advice from dubious sources, such as the spiritualist Grigori Rasputin. His stiff bearing and autocratic tendencies did not mesh well with the changes in Russia in the early 1900s. The Russo-Japanese War further pushed the population to revolutionary fever.

Despite this efforts to stay out of WW1, his wife and Rasputin ignored public opinion and chaos ensued. After a series of riots in 1917, Nicholas abdicated the throne and the family was eventually sent to Siberia where they were executed in 1918. He and his family were granted a low ranking of sainthood in 2000 due to the grace they showed in their last days.
Source: Author stephgm67