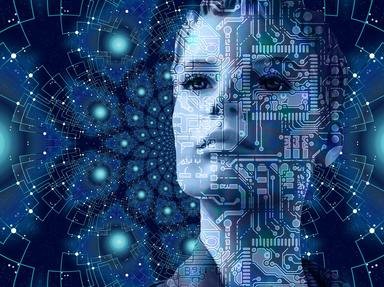 A mix of 10 Sci / Tech questions, submitted by 10 different FunTrivia players! The first few questions are easy, but the last couple are tough!

Quiz Answer Key and Fun Facts
1. Where could a coccyx be found?


Answer: At the tail end of a spinal column

The coccyx is the last few vertebrae fused together at the end of the spinal column of many mammals. Of the ones with tails, the tail extends from the coccyx.

Question by player daBomb619
2. Which of the following is classified as an airship?

An airship is a lighter-than-air craft that can be both propelled and steered through the air. None of the other choices are lighter-than-air nor is the SGS 2-22 sailplane propelled. Airships can be rigid, semi-rigid or non-rigid. Rigid airships, like the Zeppelins, had a rigid framework to support the fabric that contained the gas. Non-rigid airships have no framework. The Goodyear blimp is semi-rigid in that it has a basic framework. The gas used must be lighter than air which means hydrogen or helium. Of the two, helium is safer.


Question by player deputygary
3. Vomit, puke, hurl, barf, upchuck, spew. What is the technical medical term for this unfortunate phenomenon?

Regurgitation is the (normally) involuntary ejection of the contents of the stomach through the mouth. ["Regurgitate" is also a rock-and-roll band in Sweden, but that is quite another matter.] This medical term entered English from the Medieval Latin "regurgitatus" which is the past participle of "regurgitare" meaning to surge or to flood. Exsanguinate is to bleed. Expectorate is to spit. Micturate it to pass urine.


Question by player FatherSteve
4. What are the first drops of a mother's breast milk called?

It is high in immunoglobulins and fat content. It is not the same color as the milk that comes out later in lactation. It is slightly yellow. A mother is told to breast feed her child as soon as possible and the colostrum is very beneficial in improving the child's immunity.

Question by player Saleo
5. The success of the web browser Chrome, released in 2008, led its developer to name subsequent products, such as Chromebook (personal computer) and Chromecast (media player), after it. Which technology company was responsible for these products?

Larry Page and Sergey Brin founded Google in 1998 as a search engine, but the company has since evolved to offer hundreds of different products, such as e-mail, advertising, cloud storage, and much more. Google Chrome was released in 2008, and since then it has become one of the most popular web browsers in the world. Google also has their own operating system, Chrome OS, which has a design that resembles the web browser.

Question by player Lpez
6. If your doctor tells you he wants you to have a blood test to check your Hemoglobin A1c (HbA1c) what is he monitoring you for?

The Hemoglobin A1C is used to measure a patient's glucose in a two- to three-month period. Also known as the glycosylated hemoglobin, it is a useful tool in monitoring diabetes.

Question by player wizardsheart
7. Your ophthalmologist tells you that you have astigmatism in both of your eyes. Remain calm; it is a correctable condition. Where is astigmatism?


Answer: in the cornea or lens of your eye

When the curvature of the cornea or lens (or both) bend light entering the eye in an improper way, the result is distortion of the image seen by the retina. This may be described by the patient as blurry vision. It may also cause eye ache or headache. Fortunately, astigmatism can be corrected by prescribing glasses or through surgery to correct the curvature.

Question by player FatherSteve
8. Auranofin, a chemical listed by the WHO as a treatment for rheumatoid arthritis, is a chelated complex of what noble metal?

The Au start to the name may have been useful as a clue, or you may already have heard of treating arthritis with gold. This treatment does not involve pure gold, however. Sometimes the gold is in the form of a salt (in which the gold ion is bonded to a single biological cation), and sometimes it is chelated. Chelation is a chemical process in which a metal ion forms a complex structure in which it is bonded to multiple other ions or molecules.

Question by player looney_tunes
9. Which disease takes its name from a 16th century Latin poem?

The prevailing theory is that syphilis appeared in Europe when Christopher Columbus returned from his first voyage to the Americas (1493). Within years the great pox, as it was called, had spread all over Europe and an outbreak of the disease is even reported in Canton, China in 1503.

In 1530 Girolamo Fracastoro, a remarkable Renaissance scholar, wrote an allegorical description in Latin of the Spaniards' encounter with the New World relating the story of the sin and the sickness of a young shepherd named Syphilus.

The title of the poem is "Syphilis sive morbus gallicus" (Syphilis or The French Disease).

Question by player chabenao1
10. Which of these numbers is located on its own in the bottom left hand corner of a standard calculator?