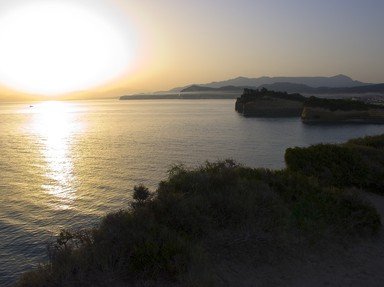 Dawn breaks at different times depending on where you are. Can you put these countries in order from the first to see the new day to the last? The quiz is based on positions relative to the International Date Line & generally ignores time changes.

Share on Facebook
Share on Twitter
Share by E-Mail
Author
rossian
Time
3 mins
Type
Order Quiz
Quiz #
410,961
Updated
Nov 23 22
# Qns
10
Difficulty
Average
Avg Score
8 / 10
Plays
156
Last 3 plays: rainbowriver (9/10), SCHLEP (10/10), LauraMcC (9/10).
Mobile instructions: Press on an answer on the right. Then, press on the question it matches on the left.
(a) Drag-and-drop from the right to the left, or (b) click on a right side answer, and then click on its destination box to move it.
Start with the earliest and remember from which direction the sun rises!


New Zealand is the first large country located to the left of the International Date Line (IDL) and, although I've given Auckland as the city to represent the country, it is Gisborne, on the east coast of the North Island which claims the honour of seeing the sun rise first for the mainland.

The Chatham Islands, part of New Zealand, are even closer to the IDL and Pacific Islands such as Samoa and Kiribati also lay claims to being the first to see the dawn. This varies according to the time of year and daylight-saving time, so New Zealand has been chosen to represent the start of the sun's journey.
2. North Korea (Pyongyang)


As we're heading west, North Korea is the next large country on our list and our first Asian country on the journey. It lies around 6,000 miles (10,000 km) to the north-west and sees the sun later than New Zealand.

North Korea has only one time zone, Korea Standard Time, and makes no adjustments to its clocks for daylight saving.
3. Thailand (Bangkok)


To see our next sunrise, we need to travel south west from North Korea to Thailand, still in Asia. Thailand is another country which doesn't have daylight saving time, and shares the same time zone as Laos, Vietnam and Cambodia, among others.


A trip to the northwest means we can see our next sunrise in Nepal, and also view the Himalayas. Mount Everest is located on the border of Nepal and China and is visible from parts of Kathmandu if the weather is clear and at certain times of the year.

Afghanistan is the last Asian country on the list as the sun is going to be seen from Europe in our next stop.
6. Greece (Athens)

Athens is one of the oldest cities on our route, with many ancient ruins and artefacts to see such as the Parthenon and the Acropolis. If you want to keep ahead of the sun, you'll need to move quickly, though.
7. Portugal (Lisbon)


Because of the Mediterranean Sea, driving from Athens to Lisbon means crossing to Italy, heading up to France and driving through Spain to reach Portugal's capital city. In a straight line, the distance is shorter at just under 1,800 miles or 2,800 km.

Lisbon is located on Portugal's western coast, adjacent to the Atlantic Ocean, making it the most westerly capital city of mainland Europe.
8. Brazil (Rio de Janeiro)


To reach Brazil from Portugal entails a trip across the Atlantic Ocean and heading in a generally southerly direction and over to the west. The distance is around 4,800 miles or 7,700 km.

Rio de Janeiro is another city located on the Atlantic coast, this time in the east of its country. Brazil was colonised by the Portuguese, and it was they who established Rio back in the sixteenth century.
9. Canada (Halifax)


Travelling from Rio to Halifax does, as you'd expect, take us in a generally northwest direction. Of all the places covered in the quiz, these two places are the closest together in longitude, with Halifax being only 20 degrees west of Rio de Janeiro.

The distance between the two cities is 4,800 miles or 7,800 km in a straight line. Halifax also borders the Atlantic Ocean and is the capital city of Nova Scotia.
10. USA (Los Angeles)


We're well over to the west now, so Los Angeles has been picked to represent the final destination, being a large city of the mainland of the USA. Hawaii is, of course, even further west and there are islands such as Howland Island which can be considered, but they are uninhabited. In case you had any doubts about the size of North America, the distance between Halifax on Canada's east coast to Los Angeles on the United States of America's west coast is nearly 3,000 miles or just under 6,000 km.

Of inhabited islands, American Samoa and Niue are very close to the International Date Line, making them among the last to see the rising sun. Samoa, among the first to see the sun rise, is just the other side. Despite this, there are times during the winter months when Alaska is a candidate for seeing the last sunrise.
Source: Author rossian

Go to Flags and Symbols Quizzes