Petra - A Rose-Red City Half as Old as Time Quiz

The ancient city of Petra is justifiably a World Heritage Site. This quiz is about this wonderful place.

Quiz Answer Key and Fun Facts
1. Who first called Petra "a rose-red city half as old as time"?

The famous line by John William Burgon (1813-88) is now constantly quoted in relation to this city. It first appeared in a prize-winning poem of his at Oxford.
2. Usually, visitors will enter Petra through a long narrow winding gorge. What is this called?

The Siq - or, more properly Bab al-Siq - translates from Arabic as "gateway to the gorge". For centuries, it was subject to sudden flash floods, until channels were dug to divert the floodwaters.
3. Who was the first Western explorer to reach Petra?

Burckhardt had to disguise himself as a local in order to persuade the people living nearby to lead him through the Siq to visit Petra, on 22 August 1812.
4. In which modern-day country is Petra?

Petra lies in part of the Great Rift Valley which also includes the Dead Sea.
5. Who built the City?

The Nabatean kingdoms are very poorly documented. It is known that their empire collapsed in AD 106, after which Petra was ruled by, successively, the Roman Empire, the Byzantine Empire, the early Islamic Umayyad Caliphate and - briefly - the Crusaders.
6. On entering the City the modern-day visitor will be confronted by one of the most dramatic of all Petra's buildings. What is it called?

Although known as "the Treasury" it was, in fact, built as a tomb. This building features in the film "Indiana Jones and the Last Crusade" where it is depicted as the hiding place of the Holy Grail.
7. Petra contains a spectacular semi-circular theatre. Who built it?

During their occupation of Petra, the Romans built this magnificent open-air theatre which, it is estimated, would seat over 5,000 people.
8. When did the last permanent residents leave the ancient city?

Right up to the 1980's there were around 400 people still living in the caves and carved buildings of Petra. The Jordanian government finally resettled them into new homes in nearby Wadi Moussa, giving them these homes free and, in most cases, also paying them a lump sum in cash to vacate Petra.
9. Very few of the monuments at Petra can be dated with any certainty. The tomb of Sextius Florentinus, however, is dated. When was it built?

Titus Aninius Sextius Florentinus was Governor of the Roman province of Arabia in AD 127, and by AD 130 he had been replaced by one Haterius Nepos, so Sextius died in office. He must have really loved Petra to wish to be buried there instead of being returned to Rome.
10. The most prodigious facade of all was built over 2,000 years ago. What is this building called?

ad-Dier - "The Monastery" was originally built as a feasting hall to honour recently-deceased nobles. Christians used it in the fourth and fifth centuries AD, carving Doric crosses into the facade, which gave rise to its present-day name.
Source: Author sancho_pft 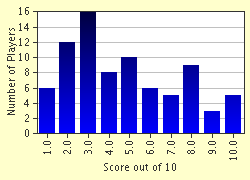 
Other Destinations
Explore Other Quizzes by sancho_pft