Japan is home to 14 World Heritage sites, including 11 of cultural importance. How far can you get in this quiz, and how many sites will you visit on your next trip to Japan?

Quiz Answer Key and Fun Facts
1. Which city hosts a World Heritage collection of temples and shrines, including Kiyomizu Temple, Ginkaku-ji Temple, and the Shimogamo and Kamigamo Shrines?

The Historic Monuments of Ancient Kyoto (Kyoto, Otsu, and Uji) were put on the UNESCO list in 1994. This 1200-year-old former capital is every visitor's vision of Traditional Japan. This is one of the most visited cities by foreigners in Japan.

Kiyomizu Temple's towering stilt-like legs, Nijojo Castle's symbolically intimidating wall paintings, and Tenryu-ji Temple's magnificent strolling garden are just a few of my recommendations.
2. Todai-ji Temple (with its giant Buddha), Yakushi-ji Temple, and Kasuga Shrine are a few of the monuments that make up the "Historic Monuments of Ancient..." which city?

Often seen as the cradle of Buddhism in Japan, Nara is even older than Kyoto. Todai-ji Temple may be the world's largest wooden building, and the Buddha sitting inside is almost 15 meters high.

Tourists flock to Nara Park to feed the deer that roam the grounds, and they even bow to you before snatching the senbei (crackers) from your hand.
3. The first World Heritage cultural site for Japan sits in Himeji, and is one of finest Japanese examples of which of these structures?

One of the few castles to survive the WWII air raids, this magnificent white-plastered fortress is often called Shirasagi-jo, or the White Heron Castle.

Its approaching roadways are twisted left and right, so that invading armies would have no straight vantage point to attack. Special windows allowed archers to shoot freely without being hit, and special drop chutes for boiling oil were also installed.

Despite all of this, this castle was never attacked.
4. Almost every tourist pamphlet includes a shot of a red Shinto gate, "floating" in the ocean. This is the gate of Itsukushima Shrine, but on which small island is it found (which is often the name that this site is referred to)?

The red torii (Shinto gate) of Itsukushima Shrine was the official entrance for boats carrying worshippers to Miyajima to pray at the shrine. If you want a closer look, wait for low tide and you can walk out to it.

The island, like the city of Nara, is teeming with deer looking for cracker handouts, and is a 15 minute hydrofoil ride from Hiroshima.
5. Some of the world's oldest wooden buildings can be found at the World Heritage site in the town of Ikaruga, outside of Nara. What is the name of this ancient temple?

Horyu-ji's five-story pagoda was probably built in the early 600s, and stands as testament to the craftsmanship involved in Japanese architecture. Most traditional Japanese buildings where built with interlocking joints and no nails, yet could withstand typhoons and earthquakes.

If you are visiting Nara, this is a great side trip for history buffs. You can also see some of this temple's rarest treasures preserved at the National Museum in Tokyo.
6. The Tosho-gu Shrine in Nikko, 140 km north of Tokyo, houses the mausoleum of who?

Tosho-gu Shrine in Nikko was built for the Tokugawa Ieyasu, who completed the process of Japan's political unification. The foundations he set for the government ushered in a shogunate that lasted for over 250 years.

The carvings on the gates are extremely ornate and exquisite. If you go, look for a "sleeping cat" in the rafters and the famous "hear no evil, speak no evil, see no evil" monkeys.
7. Drive to the mountain villages of Shirakawa-go and Gokayama to see the "homiest" of Japan's World Heritage sites. The houses in this area are built in the Gassho-tsukuri style, and meant to withstand the heavy snows of winter. What is the most distinctive feature of the house?

Thatching roofs was once a community effort and a common sight in rural areas, but blue metal or copper plating is increasing as the art is dying out. That was one of the factors in UNESCO's acceptance of these houses to the World Heritage List.

You can actually homestay at some of these houses. Sitting in front of the irori (hearth) and enjoying a steaming nabe (hot pot stew) is the quintessential cultural experience.
8. Japanese is often seen as a homogenous society, but there are many indigenous cultures that have been incorporated into the country's political boundaries. The Chinese-influenced Gusuku (Castles) of __________ harken back to the glory of this former Kingdom, and was included as a cultural World Heritage Site in 2000.

The Ryukyu Kingdom was an independent monarchy that reached its economic height in the 15th and 16th centuries. The Ryukyu government established tribute state relations with China and sent their trade ships as far away as Ceylon, Jakarta, and even Africa. The Kingdom was taken over by the feudal domain of Satsuma at the beginning of the Edo Period, and was eventually made a prefecture of Japan in modern times.

Okinawans are a proud people, and their music and arts continue to be preserved today. Shuri Castle and the Tama-Udun Mausoleum are a few of the sites where you can look back on the turbulent history of this island nation.
9. Not all World Heritage preserves ancient history. The Genbaku Dome stands as a reminder of the terrible things that war brings to a country. In which city can you see the ruins of this building?

Despite standing almost at ground zero, this Western-style commercial exhibition hall actually survived the atomic bomb that was dropped on this city on August 6, 1945. This building, the surrounding Peace Park and its monuments, and the nearby Peace Memorial Museum are dedicated to ridding the earth of nuclear weapons.

Though the museum shows the damage and victims in all of its gruesome reality, this is a must-see for anyone coming to Japan. After taking in the emotionally heavy monuments, head back near the station and enjoy some of Hiroshima's local cuisine. Oysters are popular in the colder months, and okonomiyaki (crepe-like pancakes filled with meat and vegetables) are great anytime.
10. Japan's newest World Heritage site was listed in 2007. What kind of site is Iwami Ginzan, located in Shimane Prefecture?

Iwami Ginzan was a silver mine that produced about 1/3 of the world's silver at its peak during the 16th century. Some of the houses, temples, town offices, and roads have remained unchanged since the Edo Period, making this an important preservation district.

I hope you get out and experience the beauty and wonder of Japan's World Heritage sites. Happy traveling!
Source: Author lykita 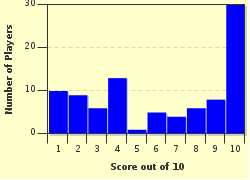 
Other Destinations
Explore Other Quizzes by lykita