This is a quiz on the different types of reptiles.

Quiz Answer Key and Fun Facts
1. Which type of reptile has the largest number of species?

At approximately 4300 species, lizards have the most. Snakes are next with about 2700 species.
2. Which type of reptile is represented by only 2 living species?

The two species of tuatara live in New Zealand. Once common, all other species became extinct around 60 million years ago.
3. What is the Jacobson's organ used for?

The Jacobson's organ is present in the mouths of snakes. The snake's tongue picks up chemicals in the air that are analysed by the Jacobson's organ. Essentially, the snake "tastes" the air.
4. What does it mean for a snake to be "viviparous"?

Mimicry by non-poisonous species occurs throughout the animal kingdom.
7. Are there any snakes which eat only plants?

While other types of reptiles eat plants, all snakes are meat eaters.
8. This type of reptile is the oldest living form of reptile, and it has changed little in over 200 million years.

Fossil evidence shows that the turtle form has been almost the same all along.
9. Snakes exist in almost all parts of the world. Which of the following is the exception?

Snakes occur everywhere but the polar regions. Sea snakes spend their whole lives in the ocean. Caves and deserts are host to many types of snakes.
10. In Linnean classification, in what order do lizards and snakes belong?

Lizards, snakes, and amphisbaenians all belong to the order Squamata. Turtles and tortoises belong to Testudinata. Reptilia is the class that all belong to.
Source: Author gbvenom 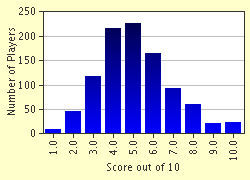 
Other Destinations
Explore Other Quizzes by gbvenom