This is a fun quiz on various reptiles.

Quiz Answer Key and Fun Facts
1. The shovel-snouted lizard lives in the sandy deserts of Africa. What is the name of the "dance" this lizard executes to keep itself cool during the daytime?

When this lizard executes the "thermal dance", it moves both its arms and legs. In the African desert, the only available source of water for this lizard is the fog. The fog condenses over the desert at night, and the shovel-snouted lizard stores this water in its body.
2. The Peringuey adder is a short and snubby snake found in Africa. What is the name of the action that explains how it moves through the desert?

The Peringuey puff adder moves through the sandy deserts side on, not forward. This minimizes the amount of skin touching the sand, which therefore helps it to stay cool.
3. The Australian thorny devil is a slow-moving lizard. It has many thorns on its body to protect itself from predators. When this lizard is threatened, what does it do?


Answer: Curls into a ball

Thorny devils curl into a ball to protect themselves from predators. Also, these lizards can eat up to 5000 ants at a single time, by using their tongue to pick them up.
4. The collared lizard of North America has coloured bands on its body. What does this lizard typically do when it is threatened by a predator in the wild?


Answer: Run away from it, sometimes on its hind legs

When these lizards are threatened, they sometimes they run away on their hind legs, which gives them the appearance of a miniature T-Rex.
5. The banded sea snake lives throughout the world. Which of these bodies of water is this snake NOT found in?

The scales of these sea snakes are blue with black bands. Also, they usually hunt at night, when it is cooler.
6. Green iguanas are native to central and northern South America, where they live in dense tree canopies. As these lizards age, what happens to them?


Answer: They progress to vegetarianism

Baby green iguanas live on insects, but as they age they progress to vegetarianism. These lizards can also leap up to 20 metres from a tree to the ground without hurting themselves.
7. The green anole is a lizard from the southeast USA, where it is often known as the "American chameleon". Its ability to change colour depends on the temperature, light intensity and emotional state. They are usually green in the day and what colour at night?

When this lizard has a positive emotional state, the colour of its skin is a bright green.
8. The male tree agama is found in several countries across Southern Africa. The blue colouring of its skin is a sign of its what?

When this lizard is threatened, the blue colour of its skin may fade.
9. Komodo dragons are the largest lizards in the world. What is the reason for the komodo dragon sticking its tongue in and out?


Answer: To sense chemicals in the air

Komodo dragons sense chemicals in the air to distinguish what particular animals are nearby. Therefore, they can target their prey.
10. The green tree python lives in jungles. The colour of an adult's skin is emerald green, but when a tree python is born, what is the colour of its skin? 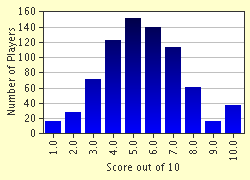 
Other Destinations
Explore Other Quizzes by whitewizard