A quiz about these wonderful reptiles.

Share on Facebook
Share on Twitter
Share by E-Mail
Author
dalmatianluver
Time
3 mins
Type
Multiple Choice
Quiz #
201,751
Updated
Dec 03 21
# Qns
10
Difficulty
Average
Avg Score
6 / 10
Plays
1049
This quiz has 2 formats: you can play it as a or as shown below.
Scroll down to the bottom for the answer key.

Quiz Answer Key and Fun Facts
1. What are slow worms?

Slow worms look very like snakes, but they are in fact legless lizards. One way to identify them is that they have eyelids, which snakes do not.
2. How can you tell an adult slow worm's sex?


Answer: Females have lines down their backs, males do not

Both sexes can also have blue spots on their underbellies. Females are usually browner in colour.
3. What is the favourite food of slow worms?

Slow worms are not slow themselves, but prefer slow-moving prey. Although they do eat spiders and other insects, their favourite food are slugs and snails.
4. Do slow worms hibernate?

Technically they do not actually hibernate, they just remain dormant or less active in the winter months.
5. To which of the following countries are slow worms not native?

Slow worms have been found in Ireland, but they are believed to have been introduced from the UK in the 1970s.
6. In which of the following months are you unlikely to see a slow worm?

A slow worm will usually still be dormant in February.
7. It is illegal to kill a slow worm purposely in the U.K.

Slow worms are protected in the United Kingdom by the Wildlife and Countryside Act of 1981. This prevents them being killed, sold or injured.
8. The slow worm cannot shed its tail.

The slow worm can shed its tail, but only once and it never grows back fully.
9. What is the Latin name for a slow worm?

Ironically, the slow worm is neither slow, nor blind!
Source: Author dalmatianluver

This quiz was reviewed by FunTrivia editor crisw before going online.
Any errors found in FunTrivia content are routinely corrected through our feedback system.
Most Recent Scores
Jan 20 2023 : rupert774: 9/10
Dec 14 2022 : Nala2: 6/10 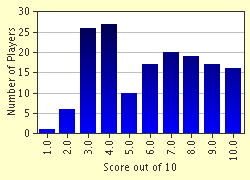 
Other Destinations
Explore Other Quizzes by dalmatianluver