Furry and fluffy mammals get all the attention! But let's look at those scaly critters that slither and scurry: the reptiles. What do you know about these cold-blooded creatures?

Quiz Answer Key and Fun Facts
1. The American alligator is the apex predator of the Everglades, Florida, USA. What is the only other country where you can naturally find alligators?

The average weight of the American alligator (Alligator mississippiensis) is 800 pounds (363 kg) and the average length is 13 feet (4 m), making it one of the largest reptiles on the planet. The Chinese alligator (Alligator sinensis), in contrast, grows to an average of 5 feet (1.5 m) and 80 pounds (36 kg). Chinese alligators remained critically endangered in the early 21st century, while American alligators were not terribly threatened.

American alligators play an important role in maintaining the wetland ecosystem and are found in marshes and swamps from Texas to North Carolina. Chinese alligators are often raised for food, as the Chinese believe that their meat protects against cancer.
2. Some alligators are born leucisitic, meaning they are mostly white. Is this an advantage?

A leucistic alligator is lacking most but not all of its pigment (unlike an albino, which has none at all). The reduced pigmentation makes it more vulnerable to predators and to sun poisoning when born, so they are almost impossible to find in the wild. Leucistic alligators can really only survive in captivity, and they make popular zoo exhibits.

Alligators are built for the water. Their eyes and nostrils are pointed atop their head, and they can breath while submerged without exposing much of themselves to prey or to other predators. They can bite with 2000 pounds of pressure to grip prey and drag it into the water.
3. At the zoo, I visited the herpetarium and saw two very large snakes. Which snake grows to the greatest length in the world -- the anaconda or the reticulated python?

Whereas the anaconda is the heaviest (fattest), the reticulated python is the longest species of snake. The python comes from Southeast Asia and can weight up to 350 pounds. The longest python was recorded at 33 ft (10 m). It can eat a 100-pound (45-kg) pig at one sitting by stretching its jaws up to three times normal size. It is a constrictor, which means it kills by smothering its prey, which it digests over the course of a week or two.
4. What snake is known for inflating its body with air, then contracting and making a loud hissing noise?

The puff adder is the most common venomous snake in Africa, and it contributes to more deaths in Africa than any other snake on the continent. Its venom contains a hemotoxin, which destroys red blood cells. The bite of the puff adder will do a lot of tissue damage; a victim could lose a hand, an arm, or even a leg.

This dangerous snake can make a full-length body strike at lightning speeds of 10 feet per second!
5. The largest lizard species in the world is the Komodo dragon, which can grow to 7-10 feet or 2-3 meters long. Where would you find this formidable creature in its native habitat?

When Komodo dragons open their mouths, they reveal a long yellow-orange tongue, resembling flame. They eat mostly carrion, but they will hunt or ambush live prey.

All reptiles, including dragons, have a three-chambered heart and breathe air into their lungs. Ova (eggs) are fertilized inside the female (just as with birds). Unique to the Komodo dragon, however, and just a few other reptile species, is the ability to reproduce asexually through parthenogenesis, which means that unfertilized ova grow into embryos. This adaptation allows a single female to enter a new island and produce male offspring, establishing a sexually reproducing population.
6. In the Mojave Desert of the southwestern USA you'll find the sidewinder. Is it one of the largest or one of the smallest rattlesnakes in California?

The sidewinder is one of the smallest snakes in California, growing only 18-32 inches long. Found mostly in the San Joaquin Valley, it is one of the most adapted desert snakes you can find as its color blends in with the sand. It crawls sideways, hence its name.

It is venomous, but because it is smaller it doesn't inject as much as other rattlers. Potency depends on the ratio of the amount of venom to the size of the prey, so an adult human has a better chance of recovering from the bite of a sidewinder. Like all rattlesnakes, it hides and ambushes its prey, which includes pocket mice, kangaroo rats, lizards, and occasionally birds. Juveniles prefer lizards while older sidewinders prefer rodents.
7. Another desert-dwelling snake is the western diamondback. Which of these statements is about the western diamondback is FALSE?


Answer: It preys on human beings.

The western diamondback is one of the largest snakes in California, New Mexico, Arizona, and Oklahoma, not to mention Mexico, and it is not to be confused with the Eastern Diamondback found from Florida to North Carolina. The western diamondback will live for twenty years and grow up to seven feet (2 meters) in length. It can swim by holding its rattle above water. Diamondbacks are not really a threat to human beings as we are too large to eat, but its bite is venomous so it should be avoided when encountered; it would only strike a human in defense, not for prey. The snakes keep the desert environment normal by eating rodents and lizards, and they are a food source for larger predators like coyotes and hawks.

All snakes and lizards belong to order Squamata. Squamates have scales or shields, movable quadrate bones. This order has the most variety in size of all the reptile orders.
8. In the Florida everglades, one often thinks of animals like alligators and snakes, but there's another dangerous animal that might get overlooked (and shouldn't). What's another reptile potentially dangerous to careless human beings?

We don't normally think of how dangerous the turtles can be, but it pays to watch out for the alligator snapping turtle, one of the largest and heaviest reptiles in North America, weighing in at 220 lbs, and certainly the largest freshwater turtle on that continent. The name comes from the powerful jaw and its method of catching food. They are carnivorous, sometimes eating live prey. The gaping jaw acts as a trap; the camouflaged turtle sits and waits for food to come to him/her. A little pink membrane comes off the tongue and acts as a lure. When a fish or other critter triggers the membrane, the jaws slam shut with up to 2000 lbs of pressure. OUCH!

They can live 20-70 years in captivity.
9. The matamata turtle might get overlooked because it is camouflaged to blend in with its surroundings. According to many sources, what is the name of matamata said to mean in the native South American language from which it is named?

Matamata turtles get that name because they are actually quite fearsome, according to Fritz Jurgen Obst in his book "Turtles, Tortoises and Terrapins". Even in zoos the keeper will pick them up only by the end and never the back, because the animals can bend their heads back and bite them. A matamata looks like a pile of leaves or bark; the head is leaf-shaped and a nose-like protrusion breaks up the profile, so it is well-suited to ambush prey, which it swallows whole. The matamata is carnivorous and eats aquatic invertebrates and fish. It resides solely in the Amazon and Orinoco basins and prefers stagnant pools and slow-moving streams, as well as marshes and swamps.

Turtles are anapsids, meaning they have no opening in the temporal region. All other extant reptiles are diapsids, in that they have two openings in the skull behind each eye.
10. You should avoid feeding adult alligators because they are so large and dangerous, but it is okay to feed baby alligators in the wild.

Alligator encounters are increasing with human encroachment in Florida, USA. Most people have enough sense not to feed such a large dangerous critter, but feeding the babies can have more serious consequences. The juvenile alligators become habituated to people and as they grow larger, they lose natural fear of humans.

Then the human benefactors become potential prey. When that happens, the adult alligator either must be relocated or must be euthanized. So feeding alligators can be a death sentence for them!
Source: Author gracious1 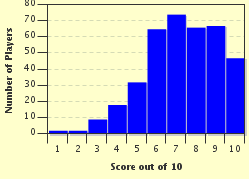