How much do you know about the humble olm? Answer the questions and find out.

Quiz Answer Key and Fun Facts
1. The olm (Proteus anguinus) is a small, aquatic salamander found in Europe. The entire species dwells completely within the cave systems of which specific mountain range?

The Dinaric Alps span from Italy to Kosovo, a total of 645 kilometres. Karsts exist below the mountains, which are natural formations in the limestone and dolomite into which the rainwater seeps. The olm is endemic to the waters of Slovenia, the Soča River in Italy, southwestern Croatia, and Bosnia and Herzegovina.
2. As a result of its habitat, the olm is blind. The eyes are regressed, almost non visible and covered with a layer of skin. Despite this, what ability do the eyes possess?

Young larvae are born with normal eyes, but they regress after four months and atrophy. This is expected as a result of the habitat they are born into. The eyes do retain a sensitivity to light. Studies have been done that suggest that there are photosensitive cells within the skin as well. Due to the lack of eyesight, the olm's other senses are heightened. Due to the thickened epithelium in the nasal cavity, they are able to determine the size and amount of prey in their surroundings.

They possess tastebuds in their mouths and their external gills - one for tasting food and the other for sensing chemicals in the water.
3. Animals that live completely in the dark portions of caves, such as the olm, certain molluscs, crustaceans and arachnids, are known by what specific name?

The olms are not the only cave salamanders that exist. They have a 'cousin', the spotted-tail cave salamander (Eurycea lucifuga), that lives in eastern United States. Troglobites have all adapted in some way physically to dark cave living.

Troglodytes are broadly defined as people who live in caves, but more specifically associated with prehistoric times.

Trogloxenes are often referred to as 'cave visitors'. These are animals that live close to caves, but not necessarily inside them.

Troglophiles are animals that generally live their life cycles inside a cave, but retain sufficient of their senses to survive above ground.
4. Olms grow to approximately 30cm in length, with a cylindrical trunk and a short, flattened tail. As a result of having very little of the pigment riboflavin within the thin skin covering its body, olms appear pink or off-white. This led to them being called by what name by the locals?

The olm's tail is surrounded by a fin and the four limbs are thin and short. Most amphibians have four digits on their front limbs, but the olm has only three. The rear limbs only have two, where ordinary amphibians have five. The olm has two external gills which are formed as two tufts at the back of the head.

Despite having very little pigment, the skin can still produce melanin and will turn darker when it is exposed to light. Because of the colour of its skin, local refer to it as the 'human fish'.
5. A study in the scientific journal, "Biology Letters", published by Messrs Voituron, de Fraipont, Issartel, Guillaume and Clobert in 2011, calculated an average lifespan of 68-70 years for an adult olm. In this same study, they predicted a maximum lifespan of how many years for an adult olm?

In the study published in "Biology Letters", they cite data from a breeding program started in Moulis, Saint-Girons, France in 1952. Since 1958 births and deaths have been recorded weekly and this data was extrapolated to determine average and maximum lifespans. According to the paper, over 400 olms were still alive after 60 years.

The paper is named "Extreme lifespan of the
human fish (Proteus anguinus): a challenge for ageing mechanisms".
6. Olm tadpoles achieve an adult appearance after four months and the adult olm retains larval features. It then takes fourteen years to reach sexual maturity. Producing young every twelve and half years, which mode of reproduction have they been proved to utilise?

The female olm lays from 35 to 70 eggs every twelve and a half years. She lays her eggs in between and underneath rocks and these eggs take approximately 140 days to hatch. Historical accounts of viviparity (life birth) in olm are unconfirmed and biologically this creature is adapted for oviparity as it contains a gland that produces egg casing. Suggestions that the olm gives birth to live young at lower temperatures and produces eggs at higher temperatures have also never been confirmed. All observations suggest that it is oviparous, meaning that it lays eggs.
7. Olms feed on a number of creatures such as crabs, snails and the occasional insect. They swallow their food whole and upon consuming large quantities of food, are able to store the nutrients in the liver. Due to adaptations like these, for how long approximately can the olm survive without food?

The nutrients are stored as lipids and glycogen in the liver and the olm can reduce its metabolic rate. In severe cases, when there is a serious food scarcity, the olm can reabsorb its own tissue. Considering the adaptations this animal has made to its environment, the longevity of each individual is not surprising.
8. "The Glory of the Duchy of Carniola", an anthology compiled by Johann Weikhard von Valvaso in 1689, has the first mention of the olm. The olms would be washed from their caves by heavy rains and gave rise to folklorish beliefs. What were they described as in this work?

"The Glory of the Duchy of Carniola" was published in fifteen volumes and covered a variety of different subjects, including folklore, medicine, biology, geology and theology of the Carniola region. Much folklore surrounded the olm as they were washed out with heavy rains. People believed them to be offspring of the dragons they believed to live just under the earth's crust.

In the anthology they are described as, "Barely a span long, akin to a lizard, in short, a worm and vermin of which there are many hereabouts".
9. The olm is very susceptible to pollutants in water, which makes them vulnerable to pesticides and any number of toxins which seep into the groundwater, leading to population decline. Which other major factor is contributing to the decline?

Thanks to waste disposal sites leaching their pollutants into the ground, the olm is threatened by a host of different toxins and this has resulted in it being placed on 'The IUCN List of Threatened Species'. It has been listed on appendices of the Bern Convention and EU Habitats Directive and legislation in countries like Italy, Croatia and Slovenia protects the species.

The illegal collecting of the olm to be sold on the black market as pets is also a major threat to the species as a whole.
10. The olm is a symbol of national heritage and was depicted on a coin called a tolar in this European country's former currency. Which country is it?

The olm is a symbol of Slovenian national heritage. The Postojna Cave system, created by the Pivka river, is home to the olm and is a popular tourist destination as a result. Also found in this cave system, is the blind cave beetle 'Leptodirus hochenwartii', another troglobite which is incapable of surviving outside the cave system.

The Slovenian tolar coin, which is subdivided into 100 stotinov (cents), had the image of an olm on it. It was phased out with the introduction of the Euro.
Source: Author kino76 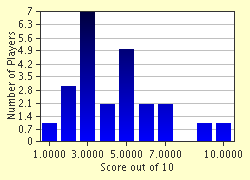 
Other Destinations
Explore Other Quizzes by kino76