A quiz on birds which have either disappeared completely from the British Isles or at risk of doing so.

Quiz Answer Key and Fun Facts
1. This large, flightless, black and white seabird (Pinguinus impennis) could hold its breath for 15 minutes under water (longer than a seal). Which bird, considered extinct globally from the 1840s, does this describe?

The great auk is not just extinct in the British Isles: the last known breeding pair was killed off Iceland in the 1840s with only one likely subsequent sighting, a decade later, of a lone bird.

The ease with which the birds could be caught and killed and high demand for their down and eggs were all factors in their extinction.
2. Despite its name, this small wading bird (Charadrius alexandrinus) of about 15-17cm in length can no longer be found in the British Isles. Of the four possible answers below, only the correct answer is a real bird: can you spot it?

The Kentish plover prefers sandy areas and is rarely found near fresh water. It is migratory, wintering in the tropics.

The other three birds are all inventions.
3. Although once a common visitor to Britain, this bird saw a sharp decline in its numbers during the twentieth century and ceased to be a resident after 1988, although there are recent promising signs of a return. Which carnivorous passerine, eating insects as well as small animals, does this describe?

The red-tailed shrike breeds in Siberia and Central Asia.

The grey-backed shrike is found in Southern Asia and the Far East.

The brown shrike is also primarily an Asian bird although occasional strays are seen in Europe.
4. This noble bird (Otis tarda) has been considered extinct in Britain since the last known specimen was shot in the 1830s although it can still be found in South and Central Europe and parts of Asia. Which bird, possibly the largest flying land animal, and which still appears on the coats of arms of both Wiltshire and Cambridgeshire, is so described?

Recent attempts to reintroduce the great bustard to Britain have so far met with only limited success.
5. Also known as the landrail, this bird (Crex crex) is still found abundantly in some parts of the world but only rarely in the British Isles. Males have a distinctive repetitive grating call. Which bird is so described?

The RSPB (Royal Society for the Protection of Birds) website still considers small numbers of corncrakes to be summer visitors to Scotland, Ireland and the Isle of Man.
6. One of my favourite bird sounds is the haunting cry of this symbol of the Northumberland National Park, placed on the Royal Society for the Protection of Birds' (RSPB) red list in 2015. To which elegant, curve-billed moorland bird am I referring?

Between 1985 and 2002 curlew numbers in many of their UK habitats declined by 79%.
7. Which songbird, once considered quintessentially British, is now much more rarely seen and heard? Hint: Its name is derived from its penchant for singing at sunset when few other birds are singing and consists of a loud mix of trills, gurgles and whistles.

Perhaps part of the reason for the British identification with the nightingale has to do with Vera Lynn's wartime recording of "And a Nightingale Sang in Berkeley Square" (a large and leafy square in the Mayfair area of London). The nightingale's habitat in the UK is concentrated in the south-eastern counties of England including Kent. It's thought that the European population of nightingales is quite robust and is of least concern.

Frank Sinatra, Rod Stewart and Nat King Cole are among those to have also recorded later versions of the song.
8. The Baltimore oriole is well known in the U.S.A. where it even has a baseball team named after it. Which distant cousin with dramatic yellow and black colouration is a rare visitor to the British Isles?

The golden oriole (Oriolus oriolus) is the only member of the oriole family to breed in the Northern Hemisphere, wintering in Africa. The RSPB's Lakenheath reserve in Suffolk is one of the best locations to see it.

The Baltimore Orioles, named after the bird species of the same name, were one of the eight original franchises when the American League (now part of the MLB) was formed in 1901.
9. Which small species of falcon, another bird red-listed in Britain by the RSPB in 2015, shares its name with a character from Malory's 'Le Morte d'Arthur'?

There are approximately 900-1500 breeding pairs in Britain, thinly scattered from south-west England north to the Shetlands.
10. The humble house sparrow has now (2015) been placed on the red list thanks to a population crash. Once the most common breed in British gardens, the RSPB estimate what level of decline for this species between 1977 and 2008?

The decline in the house sparrow population is sharpest in England. Survey data for Scotland, Wales and Northern Ireland has shown some evidence of recovery in those countries (2015).
Source: Author jon541 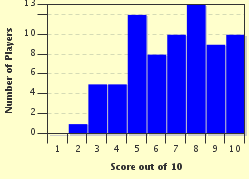 
Other Destinations
Explore Other Quizzes by jon541