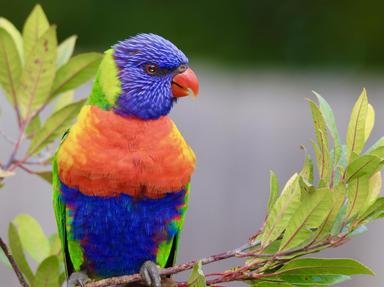 In the Red: Firebirds Trivia Quiz

Welcome to Part 1 of Team Red's 100 question quiz on all things red. Here we take a look at some beautiful birds with red plumage. Good luck and enjoy!

Quiz Answer Key and Fun Facts
1. The scarlet ibis has a bright red colouring. This is a result of predominantly which of the following?

The scarlet ibis's diet is heavy on red crustaceans, such as shrimp and crayfish, which leads to its bright red plumage. That's not all they eat, though, as they also feed on beetles, small fish, insects and amphibians. Birds that are kept in captivity are also fed beetroot to ensure they maintain their colour intensity. The juvenile birds will have a combination of grey, white and black colourings across their bodies but these will start to go red during their second moulting. They are a wading bird and, as such, their legs and necks are long. An adult bird will measure approximately 55-60 centimetres in height and will weigh around 1.3 to 1.4 kilograms.

(Team Red's pollucci19 waded on in with this question.)
2. Which small passerine bird, named Britain's National Bird in 1960, gave its name to early English postmen?

The robin (Erithacus rubecula) is so named for the Latin 'ruber' meaning red. Although its distinctive chest plumage is more orange than red, it was called red simply because the word orange wasn't invented until the 16th century. They are called passerine because of the arrangement of their toes to facilitate perching--three toes pointing forwards and one backwards.

Early British Mail Coach Guards in 1784 wore scarlet coats with blue lapels, similar to the military 'red coats', in the thought the colour would deter robbers. To further differentiate them from the soldiers, they were nick-named robin redbreast.

(Team Red's leith90 contributed this question.)
3. Which feisty vibrant bird was used as a symbol of war by the Cherokee Nation?

Just watch them during nesting season and you'll understand why. The male will drum on almost any surface reaching 19 to 25 beats per second. They'll even attack the nesting sites of other birds. The male will hollow out a cavity and show it to his mate; if she approves she taps on the tree bark. In addition to hammering away at trees with their sturdy beaks, they're also skilled at catching insects in flight.

(Team Red's sally0malley contributed this question.)
4. First studied by Sir Stamford Raffles in 1822, the crimson sunbird is widely accepted as the unofficial national bird of which island nation?

Crimson sunbirds are common resident breeders in Singapore, feeding mainly on nectar, similar to a hummingbird. Unlike hummingbirds though, which collect nectar while in flight, the sunbird prefers to perch while feeding, using its thin downward curving bill to simply pierce the base of any flower that cannot be properly accessed from its perch. They are also found in the tropical regions of India, Indonesia and the Philippines as well as Singapore, which was first established as a trading station by Raffles.

(This question was contributed by Team Red's 480154st.)
5. With a scientific name of Milvus milvus, which of these birds has been reintroduced to many parts of the UK?

The red kite is a bird of prey and, as such, was hunted to near extinction in the mistaken belief that the birds fed on farm animals and pets. They are actually scavengers and feed primarily on animals which are already dead. From being seen only in parts of Wales, the red kite has now been reintroduced to several areas of England and is a protected species, making it a criminal offence to kill one.

(This question was contributed by Team Red's rossian.)
6. Scarlet macaws like to live in humid lowland rainforests. In which of these regions would you be most likely to find them squawking in the wild?

These feisty birds are known for their vibrant plumage, which is often made up of a mix of red, blue and yellow feathers. They mate for life and are documented to have a lengthy potential lifespan of fifty years or longer. In 1985 they were added to the CITES Appendix 1, significantly restricting the international trade of these animals; their popularity in the pet industry has also been connected with illegal trade and smuggling.

(This question was brought to you by Team Red's malik24.)
7. What mid-sized territorial songbird is the state bird of seven states of the United States and is commonly identified by males having a striking red plumage, a crest on the head and a black mask around its beak?

Within the genus Cardinalis there are three species of cardinal with the northern cardinal residing from southeastern Canada through the United States, Mexico, Belize and Guatemala. The northern cardinal has a body length of about 22 cm (8.7 in), a wingspan of 28 cm (11 in) and a weight of 50 g (1.8 oz). The northern cardinal primarily eats grains, fruit and seeds. It is the state bird of Illinois, Indiana, Kentucky, North Carolina, Ohio, Virginia, and West Virginia.

(Team Red's Triviaballer contributed this question.)
8. The crimson rosella is a spectacularly coloured parrot. A cousin of the budgerigar, in which part of the world is this bird endemic?

The crimson rosella (Platycercus elegans) is a medium sized bird, approximately 35 cm in length with a prominent tail. Adults, both sexes, have bright blue tails, black colouration on their backs, and a crimson body. They are endemic to south-east Australia including Tasmania but have been introduced to New Zealand and Norfolk Island (these birds are not migratory). Confusingly, of the seven subspecies, only three have the crimson body. In the other four, three are the var. flaveolus subspecies which have a red, orange and yellow coloring and in the other, the Adelaide rosella, the predominant body color is all yellow.

(This question was contributed by Team Red's 1nn1.)
9. What tiny song bird, native to the Himalayas and seen from Nepal to Yunnan, is known by its common name, which is which of the following?

This attractive and melodious bird occurs across parts of Asia including Thailand, Laos, Vietnam and Burma (Myanmar). It is also known as the crimson-faced liocichla, and is not of concern as far as its population is concerned; however, it has been noted that the loss of shrubland, forest, and grassland habitat will impact negatively on the species. It is not migratory. The bird is also known as a 'laughing thrush'.

(This question was contributed by Team Red's VegemiteKid.)
10. The red avadavat, a small bird native to Asia, is also known by which fruity name?

Additionally, it is known as a red munia, and its scientific name is Amandava amandava which is derived from Ahmedabad, a city in Gujarat, India. Its natural distribution range is predominantly in the Indian subcontinent, where it breeds, but extends east and south as far as Java. There are some populations that have been introduced to other areas, such as Spain, Egypt, Puerto Rico, and Hawaii. The males of the species have the most red plumage during mating season, while the females and immature males have more brown feathers. White spots on the red feathers does remind you of the seeds of a strawberry.

Related Quizzes
This quiz is part of series In the Red:

In the final week of the Team Task Challenge, Team Red's last unifying challenge was to write a 100 question quiz featuring ten different categories on a colour of our choice. Naturally, we chose red.