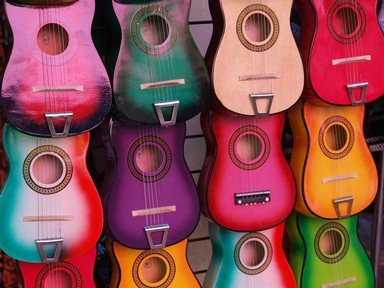 Welcome to Part 8 of Team Red's 100 question quiz on the colour red. In this part, we look at the red hot hits chosen by the team.

Quiz Answer Key and Fun Facts
1. In a song of the same name, who did the Police tell that they didn't have to put on the red light?

According to Sting in "A Visual Documentary" in 1978, "Roxanne" was a throwaway song that they were 'embarrassed' about due to its slower melodic nature. It did not immediately garner much commercial success or attention but was eventually considered number 388 in Rolling Stone's "500 Greatest Songs of All Time" as well as many of their "Greatest Hits" albums. The 'red light' may refer to promiscuous red-light districts, as the following lyrics suggest:

Question written by malik24 under a red light.
2. "I See Red" was a successful second single for which New Zealand band in 1978?

"I See Red" was a follow-up single to the group's 1977 moderate hit, "My Mistake".
Ironically they were more popular in Australia than their own country before moving there in 1974. The band were known for an edgy hybrid of keyboard-orientated punk/new wave fusion replete with wacky stage clothing and outrageous haircuts. They developed a more global following when they dropped the outfits and haircuts and released the "True Colours" album in 1980 which contained their smash hit, "I Got You".

Question contributed by 1nn1 whose hair has never had split enz.
3. Which band took 'Ruby' to the top of the UK Singles Chart in 2007?

The song was taken from the band's second album, 'Yours Truly, Angry Mob' and became their first number one in the UK. The lyrics repeat the name Ruby four times in the chorus, but the title has the name only once. Kaiser Chiefs originate from Leeds, with lead singer Ricky Wilson coming from Keighley in West Yorkshire.

rossian 'Predicts a Riot' if you got this question wrong.
4. Along with Bruce Woodley of the Seekers, who cowrote The Cyrkle's 1966 hit "Red Rubber Ball"?

Simon and Woodley originally wrote the song for the Seekers but they initially turned it down, although they did later record it. The song was recorded when The Cyrkle was in the midst of disbanding because of creative differences. "Red Rubber Ball" sold over a million copies and was number two on Billboard's Hot 100 Chart.

This question bounced into the quiz from sally0malley.
5. In his 1977 hit Elvis Costello claimed that the angels wanted to wear his red (what)?

Legend has it that Costello wrote this song, "(The Angels Wanna Wear My) Red Shoes", in ten minutes while taking the train to Liverpool. He didn't have a recording device with him so he kept repeating the number over and over in his head until he managed to get to his mother's place. The song tells of the angels arriving at a club, seeking out Costello's red shoes to replace their wings, which have developed a bad case of rust. Elvis obliges and, in return, they grant him immortality. His girlfriend, however, is not impressed with this turn of events and walks out on him with another guy.

This question was created by pollucci19 who's never owned a pair of red shoes.
6. In the 1953 Guy Mitchell song, "She Wears Red Feathers", where does the singer work, according to the lyrics?


Answer: In a London bank

"She Wears Red Feathers" was only the sixth song the reach number one on UK charts, which started logging record sales in 1952. Guy Mitchell would go on to have a further three UK number one hits between 1953 and 1957, including "Singing The Blues" (1957) which was knocked off the top spot by Tommy Steele's version of the same song, only to reclaim number one the following week.
The lyrics are, "I work in a London bank, respectable position. From nine to three they serve you tea".

Question contributed by 480154st who has worn red feathers but never a hooly hooly skirt.
7. The 1986 song 'Lady in Red' was released by which artist off his 'Into the Light' album?

Released in June 1986, 'Lady in Red' was the second single off Chris de Burgh's 'Into the Light' album. It was a massive hit as it roared across the globe, making it into the top 40, if not the top ten, and quickly became de Burgh's signature song. It left people divided though- those who didn't love the song, hated it. Readers of Rolling Stone magazine voted it number three on the list of most hated songs of the 80s, and in 2001 it was the fourth most hated UK number One.

Question contributed by leith90, who cleverly gave no hint whether she likes or loathes this song.
8. "Red Red Wine" was originally recorded by Neil Diamond in 1967, but which group released a chart-topping cover of the song in 1983?

Neil Diamond's version of the song did not perform remarkably in the charts, reaching number 62 on the US Billboard Hot 100. Several covers of the song were recorded in the late 60s, but the 1983 UB40 version that was the most successful and well-known. The UB40 version reached the number one spot on multiple charts, including the US Billboard Hot 100 and the UK Singles Chart. Neil Diamond's original version was an acoustic ballad, but UB40 changed the style to a Reggae fusion with a lighter tone. "Red Red Wine" was released on UB40's fourth studio album, "Labour of Love", which was made up of cover versions of ten different songs.

Question created by tiffanyram, while drinking a glass of wine.
9. Famous for their song "Rude", what Canadian reggae band released the song "Red Dress" in 2016?

Magic! was formed in 2012 in the city of Toronto with Nasri Atweh as lead singer. The song "Red Dress" appeared on the band's album "Primary Colours". The song describes a man that is quite enamored with a woman in a red dress and his thoughts as he is interacting with her.

This magic was pulled out of Triviaballer's sleeve.
10. The song 'Red River Valley' has been recorded by many artists, but who recorded it for the 1936 movie of the same name?

Gene Autry was born in Texas, USA in 1907, and acquired the nickname 'The Singing Cowboy'. His signature song is "Back in the Saddle Again". Humourist Will Rogers encouraged him to pursue singing as a career. For a time he owned Challenge Records; he started to appear in some 45 movies from the early 1930s. He enlisted in the United States Army in 1942, and became a pilot in the United States Army Air Forces and flew a number of dangerous missions.
The song 'Red River Valley' is derived from an old folk song, most likely from Manitoba, Canada. There is a valley of that name in the area, so it has been assumed that the valley of that name is the one referenced in the song.

This song was drummed up by Team Red member VegemiteKid.
Source: Author 480154st

Related Quizzes
This quiz is part of series In the Red:

In the final week of the Team Task Challenge, Team Red's last unifying challenge was to write a 100 question quiz featuring ten different categories on a colour of our choice. Naturally, we chose red.


Other Destinations
Explore Other Quizzes by 480154st