Here are ten interesting facts about animals. Enjoy the quiz!

Quiz Answer Key and Fun Facts
1. What is unusual about the cheeks of the golden hamster?


Answer: They extend from their lips to behind their shoulders

This feature allows them to carry large amounts of food to their burrows. All domesticated hamsters in the world are the descendants of one Syrian wild golden hamster that was captured in 1930 by the zoologist, Israel Aharoni. Hamsters are nearsighted and colour blind, but have a good sense of smell and hearing.
2. Most slugs have two pairs of feelers. The top ones are for sensing light. What do the lower ones do?


Answer: Provide the sense of smell

An interesting fact about these feelers is that they can be retracted if necessary, and if they are removed by any misfortune, they can be regrown. "Slug" is a name applied to any gastropod invertebrate animal. This includes snails. Regarding snails, they breathe through their feet, live up to fifteen years, and can sleep for up to three years.

Some also have venom that is extremely poisonous.
3. Which European country, the highest consumer of donkey meat, uses this product in several regional dishes?

Italy consumes more equine meat than any other country, and donkey meat is the main ingredient in various dishes in several areas. Donkey milk is also consumed in Italy. Croatia consumes donkey milk as well, and uses it to make soap and various cosmetic products.

The little donkey has a bray that can be heard as far away as three kilometres. The purpose of their large ears is not only to enhance their hearing, but also to act as cooling devices. Another interesting fact about donkeys is that they have eyes which, it is said, enable them to see all their four feet at once.
4. Which cerebral feature of the koala is greatly reduced in size compared to that of its ancient ancestors?

Brains of the first koalas once filled their entire cranial cavities. Now they consist of only 0.2% of their body weight, with the two hemispheres looking like "shrivelled walnuts". It is the only animal on the planet that has undergone such an astonishingly reduced brain. Scientists believe this is a result of a change in the koala's diet from the wide variety of food they once consumed. With the alteration to the world's climate came a change in available vegetation, and now the diet of koalas consists almost entirely of eucalyptus leaves.

This is a food cycle that provides very little in the way of energy, leading to the small creatures usually sleeping up to eighteen hours a day. This places them in the same ecological family as sloths.
5. Sheep have scent glands which are located in front of their eyes - and, astonishingly so, on which other part of their bodies?

Sheep have an excellent sense of smell, but scientists still debate the purpose of the two different locations of the scent glands. It is believed that the facial ones are for breeding purposes, while the ones located on the feet are to enable sheep to find any lost members of the herd which have wandered away.
6. What happens to the tail feathers of a rooster that has been castrated?


Answer: They grow much longer

A castrated rooster is known as a capon. Not only do its tail feathers grow extra long as a result of the procedure, its hackle and saddle feathers do as well. Roosters begin crowing before they are four months old, and they crow to protect their territory. Whether he crows a lot or only a few times a day depends on the bird's personality. Roosters can actually cluck as well if they want to, but usually only do this if they are trying to show their rather dim-witted hens where food is. Though many of his feathers grow longer if he has been castrated, a rooster's comb and wattles actually stop growing altogether.
7. Regarding their human prey, what particular aspect of humanity acts as an odorous lure and appeals most to mosquitoes?

Seventy-two odour receptors are located on the mosquito's antennae. Twenty-seven of these are designed to detect the carbon dioxide, octenol and other chemicals found in body odour. It is the female mosquito that bites and drinks blood. She can, in fact, drink one and a half times her own weight in blood in the one sitting.

She uses the protein and iron she finds in blood to help her develop her eggs.
8. Old male giraffes are given which unflattering nickname?

Giraffe fur is full of natural insect repellant and antibiotics. The combination of these and several other chemicals in the fur give giraffes a somewhat unpleasant odour. The older a male giraffe grows the more he smells. This smell is also believed to act as a lure for lady giraffes.

Other interesting facts about giraffes is that the female gives birth while standing up and the baby giraffe, when born, can drop up to six feet onto the ground below without being harmed. A giraffe has the same number of neck muscles as a human male, and the adult giraffe has a tongue that can be as long as twenty-one inches.
9. According to the bible, which animal's hair was used to make curtains for the tent that contained the tabernacle?

This can be found in Exodus 25:4 in the Old Testament. Goats were considered clean by the Jewish people and it was customary whenever an honoured guest arrived for a goat to be slain as a mark of respect. Goats were also used in sacrificial ceremonies, such as in the festival of the Day of Atonement, known as Yom Kippur. Two goats took part in this ceremony. One was the sacrifice, but the other was allowed to escape and wander into the wilderness.

The word "scapegoat" is a link to this ancient ceremony.

Other interesting goat facts: When female goats are in heat they wag their tail more often - and billy goats urinate on their own heads in order to smell more appealing to the females.
10. Do Male monkeys go bald the same way that human men do?

Monkeys have varied relationships with mankind. They can be seen as pests and hunted as a result, kept as pets, used in research laboratories and even trained to be helpers for people with disabilities. They've even been used for space exploration going right back to 1949.

The first monkey to fly in space was Albert II, who flew in a United States V2 rocket that year. In some parts of Asia, Africa and China, monkey brains are even eaten as a food delicacy.
Source: Author Creedy 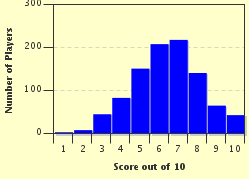