The amazing life of an oyster extends far beyond the pearl earring- or worse, the stew on the menu. This quiz explores the many little-known facts about the incredible oyster.

Quiz Answer Key and Fun Facts
1. Which goddess from Greek mythology emerged from the sea on an oyster shell?

Aphrodite was the Greek goddess of love and beauty. (As a result, oysters are now considered to be linked with eternal love.)
Oysters were even traded by Roman emperors for gold, and long considered a delicacy. Although they are highly nutritious, it is unfortunate that many people believe these brilliant creatures are valuable for no more than a delicious entrée.
2. Ostreidae is the scientific name for the edible oyster. Which genus is that of the pearl-forming oysters?

There are many types of pearl-creating oysters, including the Gulf pearl oyster, black-lipped oyster, white/gold-lipped oyster, Shark Bay pearl oyster, and Japanese pearl oyster.
Each of these species belong to the Pinctada genus and are of high commercial interest for harvesting fine pearls.
3. Oysters have gills.

Oysters breathe in a similar way to fish, using gills to extract oxygen from the water. They also use the mantle, a thin layer of tissue between the shell and the soft body inside.
Oysters also use their gills to filter algae, brine, plankton, and other small organisms from the water for food.
4. Oysters create pearls by secreting _________, made up of calcium carbonate, which builds up in layers and becomes lustrous and shiny.

Nacre is the substance more commonly known as the "mother-of-pearl". It is released by the oyster only after a foreign substance of some type (a grain of sand, a piece of rock, or even a parasite) has entered the shell and caused irritation. This defensive tactic causes layers of nacre to build up around the intruder and eventually become smooth and round. (Hence, the pearl.) The creation of a pearl takes years, depending on size.
5. The largest oysters can grow up to three feet long in shell length. Which is the largest pearl-producing oyster?

While the largest oysters can grow up to three feet (one meter), most oysters grow to be only a few inches long. The Akoya oyster produces saltwater cultured pearls in Japan. The black-lipped oyster grows large also, with adults capable of reaching ten pounds or more. The black-winged pearl oyster produces mabé pearls, which form on the shell rather than in the tissues.
The silver-lipped oyster is found in the South Seas, and is the largest oyster pearl-producing oyster. (This oyster is also known as the gold-lipped oyster.)
6. Will every individual oyster form a pearl sometime during its lifetime?

In the natural world, a pearl is only created after a foreign substance has accidentally entered the oyster shell.
When people culture pearls, however, a "nucleus" is inserted into the oyster shell in order to stimulate the production of nacre. (This is known as "grafting".) Usually, the nucleus is a perfectly round piece of mussel shell and is inserted with hopes of the oyster producing a jewelry-quality pearl.
7. The oyster is a predator of the starfish.

Actually, the starfish is a predator of the oyster. Oysters have many natural enemies. Besides sea birds, sand crabs, and human oyster catchers, there are also snails, sea stars and sting ray. (Remember, oysters cannot "outrun" even the slowest of hungry creatures.) Drill snails use their radula (located near the jaws) to drill holes into the tough shells of oysters (and other mollusks) and suck out the soft body inside.
Despite their angelic appearance, sea stars are actually carnivores which feed on oysters as well. Using their tubed feet, sea stars are able to pry open even the most tightly sealed shells.
Sting rays crush the shells with strong jaws, while the oyster-catcher bird is able to insert a long slender beak into the partly opened shells of mussels or oysters.
8. There are no such things as male and female oysters.

Although there are indeed oysters designated as males and females, oysters are able to change from one gender to another several times during their lifetime. Most often, but not always, oysters start off as males and end up as females. Because of their ability to change genders (often due to environmental influences), there will usually be an equal number of males and females in a given group of oysters.
Female oysters typically release millions of eggs, which hatch within hours. The larvae develop an eyespot and a "foot" to attach themselves to a surface. (They are then known as "spat".)
Because they have so many natural predators, only a dozen or so of the millions of eggs produced will survive to become adults.
9. The oyster crab is also known as which?

This tiny crab, about the size of a dime, lives inside the shell of its host (which is usually an oyster or mussel). The crab has a relatively soft shell and therefore relies on the hard shell of the oyster for protection. The oyster crab resides in the gills of the oyster and eats small algae particles which enter from the water. Up to a dozen of these small critters can be found within the shell of a single oyster.

However, the crabs eventually cause permanent damage by eroding the oyster's gills.
10. Of the options listed, which is the most necessary ingredient for an oyster to produce a pearl?

Perhaps, then, people can take a lesson from the inspirational story of the oyster. They can learn that it takes more than pearls to characterize such a determined little sea creature:

"The Oyster"
"There once was an oyster whose story I tell,
Who found that some sand had got into his shell.
It was only a grain, but it gave him great pain
For oysters have feelings although they're so plain.

Now, did he berate the harsh workings of fate
that brought him to such a deplorable state?
Did he curse at the government, cry for election,
And claim that the sea should have given him protection?

No- he said to himself as he lay on a shell,
Since I cannot remove it I shall try to improve it.
Now the years have rolled around, as the years always do.
And he came to his ultimate destiny: stew.

And the small grain of sand that had bothered him so
Was a beautiful pearl all richly aglow.
Now the tale has a moral, for isn't it grand
What an oyster can do with a morsel of sand?

What couldn't we do if we'd only begin
with some of the things that get under our skin."

This poem (my favorite), "The Oyster", was written by "Anonymous".

Any kind of irritant can cause the formation of a pearl, as the oyster will coat the intrusive material in nacre.
Source: Author RiriFairy 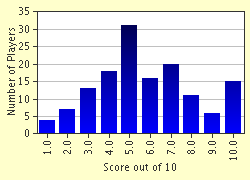 
Other Destinations
Explore Other Quizzes by RiriFairy