Many of us only know tuna as a food eaten canned or maybe as sushi. Here are some other tuna facts for your delectation.

Quiz Answer Key and Fun Facts
1. Albacore tuna can be found in both the Atlantic and Pacific oceans. Which of these is their main source of food?

The albacore diet also consists of fish and crustaceans. A favorite cephalopod is Heteroteuthis dispar, a species found in the ocean at depths as much as 1600 meters.

Many sport fishermen prize the yellowfin hunt due to their strength and speed. Some of the places where hunting trips can be organized are California, Mexico, Hawaii, and the Gulf of Mexico.
3. The Atlantic bluefin tuna is fished both commercially and by sport fisherman. From the list below can you identify one of the nicknames for this fish?

The Atlantic bluefin tuna was referred to as common tunny in the U.K., Australia and New Zealand before the more current "tuna".

Due to overfishing, in 2011 the Atlantic bluefin tuna was classed by the International Union for Conservation of Nature (IUCN) as an endangered species.

This tuna lives between 35 and 40 years, reaching a length of 6.6ft (2.0m) and 1,508lb (684kg).
4. Using ultrasonic transmitters, it has been found that bigeye tuna descend to deep, cool waters during the day and ascend at dusk to warmer waters. What is the Hawaiian name for the bigeye tuna?

Yellowfin and bigeye tuna are called ahi in Hawaii.

The bigeye tuna can be found in tropical oceans all over the world, but not the Mediterranean Sea. These fish usually live between five and sixteen years, reaching a length of 5.9ft (1.8m) and weigh in at 460lb (210kg).

It is speculated that the daily swimming from cool to warmer waters is a feeding pattern. This tuna generally dives deeper than others in the tuna species.
5. Which of the tunas below is the only species in the genus Allothunnus?

The slender tuna can be found between the latitudes of 20 and 50 degrees. These fish can grow to 30lb (13.7kg) and 2.8ft (0.86m).
6. The Pacific bluefin tuna has been successfully bred in Japan. What name is used to refer to the farm-bred tuna?

The Pacific bluefin tuna is generally found in the northern Pacific Ocean. These fish grow to approximately 6.6ft (2.0m) and weigh 990lb (450kg). The lifespan varies between 15 and 26 years.

The Kinki University of Japan started with already-hatched bluefin tuna and then bred them.

They can swim up to 30 miles an hour in 10-20 second sprints facilitating the catching of small squids and fishes.
7. Thunnus tonggol can be found in the Western Indian Ocean and West Pacific tropical waters. Which of the names below is the common name for this tuna?

The longtail tuna generally stays in waters of less than 200m depth. The fish can live to 18 years of age, reaching a length of 2.3ft (0.7m) and weighing 79lb (35.9k). They generally avoid turbid water conditions.
8. Skipjack tuna are often found in shoals near surface waters. These fish are often caught to be sold commercially. Cured and smoked, which of these Indonesian dishes is made from skipjack tuna?

The skipjack tuna is one of the most fecund of those harvested commercially. They spawn year round at the equator. These fish can live between six and twelve years and grow to a length of 2.6 ft (0.8m) and 76lb (34.5kg).
9. Which of these tunas can mainly be found around coral reefs?

The dogtooth tuna generally swims with his mouth agape to catch the small fish and squids that it eats. The can grown to a length of 75in (190cm) and weight 286lb (130kg). These fish can be found in the Pacific Ocean from Japan to Australia.
10. Which of these migratory tuna is found only in the western Atlantic ocean?

The blackfin tuna can generally be found from Massachusetts, U.S., to Rio de Janeiro, Brazil. This is one of the smallest of the species, generally only weighing 49lb (22.4kg) and reaching a length of 2.3ft (0.7m). They reach sexual maturity at two years of age and are old by the time they've reached five years.
Source: Author mlcmlc 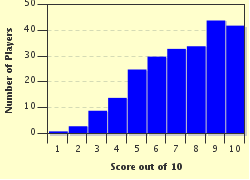