While you might find yourself in the position of being able to touch one of these venomous fish, it's really not a good idea to do so!

Quiz Answer Key and Fun Facts
1. The common name of Dasyatis pastinica, shown in the picture, should warn you not to touch it, a warning that Steve Irwin would have been well advised to heed. What is it called?

Stingrays do not usually attack people, and stings are usually the result of a stingray being stepped on in shallow water. The sting is usually very painful, with localised swelling and muscle cramps caused by the venom. The barb often breaks off and stays in the wound, which can lead to infection. Fatal stings can occur if the stingray happens to pierce a vital organ.

In the case of Steve Irwin, known as The Crocodile Hunter, his heart was pierced when he approached a stingray from the rear, causing the frightened fish to defend itself by stinging him several hundred times within the space of a few seconds.
2. The common name of members of the genus Pterois is one of pride, but they are also known by a number of other animal-related names. What is the common name of Pterois antennata, pictured here?

Most species of the genus are called lionfish, although the incorrect options are also members of Pterois. Other names include zebrafish, dragonfish and scorpionfish. All members of the genus Pterois give you plenty of notice to steer clear - they are brightly colored, with dramatic fin displays.

The spotfin lionfish, also called the broadbarred firefish, has a nasty venom in its fin spikes, which it uses primarily for defence. Growing up to about 20 cm in length, the spotfin lionfish is commonly found in lagoons and coral reefs in the tropical waters of the Indian and Pacific Oceans.
3. What is the common name for Siganus vulpinus, whose striped face once led to it being classified in the genus Lo?

They are herbivorous, and the brightly-colored ones, such as the foxface (whose species name comes from the Latin word for fox), are popular in home aquariums for their algae-controlling behavior.

But don't touch them as you are cleaning your aquarium, or you may regret it!
4. Members of which long-tailed species (officially called Hydrolagus colliei) were seen and identified as being responsible for the deaths of at least six harbor seals in the US state of Washington between 2006 and 2011?

Hope you spotted the hints to help you decide which of these members of the genus Hydrolagus was the guilty party. Their long tails, up to half their length (which can be over a metre), led to the ratfish name; the white spots on their bronze backs are an obvious feature.

They have a venomous spine on the front of their dorsal fin, which should not be touched unless you want a painful sting (despite the fact that their Wikipedia entry says they are harmless). They are bottom-dwellers, but can be found close to shore in the northern part of their range (in the eastern part of the Pacific Ocean), hence their interactions with harbor seals.
5. Fish of the species Trachinus araneus do not produce cloth, and they swim in straight lines, no staggering here! Don't try to grab one, though, or you might be wounded by the highly venomous spines on their dorsal fins and gills. Which of these fish is pictured here?

Although they are sometimes erroneously called weaverfish, the weeverfish get their name from an Old French word for a serpent or dragon, 'wivre'. Unlike most fish, they do not have swim bladders, which means they sink like a stone whenever they stop actively swimming.

They spend much of their time buried in the sand, ready to grab small fish or crustaceans that swim too close. Stepping on a buried weeverfish is the most common reason for human injury. They are found in the eastern Atlantic Ocean and the Mediterranean Sea, and prefer shallow waters in this subtropical region.

They are not commercially fished, but are edible when caught.
6. This is a picture of a member of the species Synanceia verrucosa, usually called the reef stonefish. In which of these places would you be most likely to encounter him?

Stonefish are primarily found in coastal regions of the Indian and Pacific Oceans, although there is some evidence that they may have migrated into the Red Sea as well. They are not, however, found in the eastern part of the Atlantic Ocean or in the Caribbean, the location of the reefs in the incorrect options. Stonefish have one of the most toxic venoms of any fish, and are a hazard about which divers on the Great Barrier Reef and those who walk on the beaches in the area are warned in no uncertain terms.

They camouflage themselves very efficiently, and look like a rock until they are stepped on, when the difference becomes painfully clear. The spines are so strong that they can penetrate through shoes, so even the precaution of footwear is no guarantee of safety.

Despite this, they are eaten as food in some Asian countries, usually cooked (which denatures the toxic proteins), but sometimes raw as sushi.
7. In the cabezon (Scorpaenichthys marmoratus), there is a strong association between gender and color. There is a 90% chance that the fish in this picture is female.

Also known as a scorpion fish, the literal translation of its genus name, this is not in the same family as the 'true' scorpionfish, which includes the lionfish and the stonefish. Scorpaenichthys marmoratus is the only species known in this genus - a lonely existence, with few close relatives! They come in red, green and brown as the primary colors in their mottled coloration pattterns. Red ones are 90% male, green ones are 90% female. Cabezon are found along the Pacific coast of North America, where they are a popular game fish. Don't eat the roe, however, as it is toxic. Cabezon eggs may be green or purple, and the male guards them aggressively until they hatch.
8. This is a picture of an example of Uranoscopus sulphureus, usually known by a name that includes a rough translation of the Greek roots of its generic name. Which of these is it?

The genus name comes from the Greek 'ouranos', meaning sky, and 'skopein', meaning watch. All stargazers, which includes over 50 species in eight different genera, have eyes on the top of their head, and an upturned mouth - they remind me a bit of a bulldog.

They hide under the sand, then leap up to grab their prey as it swims past. Not only are all stargazers venomous, members of the genus Uranoscopus can also give you an electric shock! This is definitely one fish not to touch. Nevertheless, its flesh is quite edible.

In Australia it is often sold as monkfish, despite not being even remotely related to either of the two northern hemisphere genera given the same name - Squatina and Lophius.
9. Plotosus lineatus, shown here, is a member of an order of fish known primarily for the prominent 'whiskers' usually found on their faces. What is the English name for this fish?

All catfishes are in the order Siluriformes, and almost all have venomous spines and barbels around the mouth that resemble a cat's whiskers. The eeltail catfish has venomous spines on its dorsal and pectoral fins, capable of providing a fatal dose to humans who are unwary enough to allow it.

They are found in the eastern Mediterranean, the Indian Ocean and western parts of the Pacific Ocean, where they live in coral reefs and estuaries. The barbels around their mouths are used to stir up the sand and expose their prey, mostly crustaceans, molluscs and small fish.
10. This handsome fellow is an example of Sanopus splendidus. They are members of the family Batrachoididae, whose name suggests that they resemble which of these animals?

The toadfishes come in a large variety of shapes and sizes, including this splendid toadfish, which is endemic to the Caribbean island of Cozumel, off the coast of Mexico. Unlike most toadfishes, they are brightly colored - blue body, yellow fins, and stripes on their heads. They hide under coral reef ledges, springing out to capture prey as it swims overhead. Interestingly, they can make a sound using their swim bladders, increasing their resemblance to toads. Males use this ability to attract females to the nests they have built.

If you are a fan of the Australian television show 'Neighbours', you would know that Toadfish Rebecchi, played by Ryan Moloney, was first seen in 1995 in a scene in which he was asking his brother Stonefish (Anthony Engelman) to take him along on a trip to the beach. The brothers were said to have gotten their nicknames from their resemblance to the fish. I don't see it, myself.
Source: Author looney_tunes 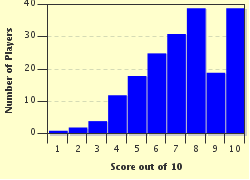 Related Quizzes
1. The Cold, the Wet and the Ugly Average
2. Watch Out! They're Dangerous! Easier
3. I Caught What?! Easier
4. I Caught a Fish This Big! Average
5. Catch Them If You Can! Easier
6. Recognize Your Seafood Before Battering Tough
7. Trolling For Trout Average
8. The King of Alaska! Average
9. State-ly Fishing Average
10. Going Fishing Average
11. My Cuban Diving Adventure Tough
12. That Sounds Fishy to Me Average