I'm going fishing for ten different kinds of fish. Of course you'll have to identify the fish. Care to join me?

Quiz Answer Key and Fun Facts
1. This beautiful cold-water fish is a member of the salmon family. A favorite of those who fish in the waters of the Pacific Northwest, which fish is it?

Rainbow trout are usually blue-green or yellow-green in color with a pink streak along their sides. Their habitat is cool, clear rivers, streams and lakes. The migratory trout are known as steelhead due to their silver markings. Rainbow trout spawn in early to late spring.
2. Native to Europe and Asia, this freshwater fish is well adapted to a variety of climates. What is it called?

Belonging to the family Cyprinidae, this hardy fish has been around for thousands of years. Carp are generally large with serrated spines. The females and males look alike except for the slightly larger fin on the bellies of the males. Koi, often found in aquariums, are common carp but domesticated for ornamental purposes due to their bright colors.
3. There are three main species of this gamefish and where they dwell depends on the species. Most prefer fresh water. Name this fish.

European perch, native to Europe and Asia and later introduced to Australia and New Zealand, are easily identified by their dark stripes. They are pale green in color. The Balkhash perch are found in the countries of China, Kazakhstan, and Uzbekistan. Both species reach the weight of approximately five pounds.

The smallest of the three is the yellow perch. This species can be found swimming in lakes and streams of the U.S. and Canada. Some are raised in hatcheries. Perch are carnivorous.
4. Named for their barbels, or sensory organs that resemble whiskers, this fish can be found in coastal regions of every continent except Antarctica. Which of the following is it?

Catfish are bottom-feeders. Their barbels help them locate food. Although catfish have different body shapes, most are shaped like a cylinder. For hundreds of years, catfish have been farmed for food in many countries of the world. Catfish lack scales but are ray-finned, meaning they have protruding spine-like rays on their dorsal and pectoral fins which act as a type of defense.
5. This colorful fish with the heavenly name belongs to the Cichlid family. Originating in South America, what is it called?

They feed on invertebrates and other fish. Marine angelfish are known for their bright colors. Unlike the freshwater species, they feed on algae and crustaceans such as shrimp.
6. This fish, of which there are 25 species, belongs to the family Acipenseridae. Found in subtropical and subarctic waters of the U.S. and Eurasia, name this fish.

If you enjoy eating caviar then you can thank the sturgeon since they are harvested for roe. Sturgeon are similar to catfish in that they have barbels and the skin is covered with scutes. Unlike catfish, their skeleton is almost completely cartilaginous.

They are bottom-feeders. Since they lack teeth, they suck in the food through their mouths. Most sturgeon spawn in fresh water but feed in salt water.
7. A type of flatfish found in the North Pacific and North Atlantic oceans is often eaten on Catholic holy days. In fact, its name is derived from the words for holy and flat fish. By what name do we commonly call this fish?

Halibut live a long time, females outliving the males. The oldest recorded female halibut lived 42 years, outliving the oldest male by 15 years. The coloration of halibut is quite clever. The upper dark side, where the eyes are located, blends in with the ocean bottom.

The underside is white and blends in with the sky if viewed from below. Most of the Pacific halibut is found in the Gulf of Alaska. Fishing for halibut is also popular in Japan and Russia.
8. Closely related to tuna, this torpedo-shaped fish is from the family Scombridae. If you use the name of this fish preceded by the word "holy" you'll get an expression of astonishment. Which of the following is it?

The mackerel is carnivorous. It feeds on plankton, crustaceans, and other fish. Its spawning season is spring to early summer in coastal waters. Two species of mackerel include Pacific chub, found along the California coastline, and the common mackerel, found on coastlines of the Atlantic ocean.
9. There is a cape off the eastern coast of Massachusetts that shares the name of this fish. It belongs to the family Gadidae. What fish is it?

The taste is mild and the white, flaky flesh is quite substantial. The livers of cod are beneficial to humans. They are used to make cod liver oil which is rich in vitamins A, D, E and omega-3 fatty acids.
10. In some countries of the world this fish is called broadbill. The most recognizable feature is its long, flat bill. By what other name is this fish commonly known?

Swordfish are large, predatory fish. The long, flat bills are what gives this fish its name. There are Pacific, Atlantic, and Mediterranean swordfish. It is believed that this fish uses its sword-like bill to injure its prey, thus making the prey easier to catch. Swordfish are migratory and head for cooler waters to feed in the summer months.
Source: Author nmerr 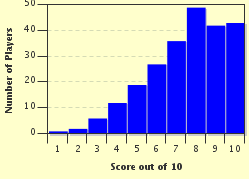 Related Quizzes
1. Fish Easier
2. Catch Them If You Can! Easier
3. Watch Out! They're Dangerous! Easier
4. I Caught What?! Easier
5. The Cold, the Wet and the Ugly Average
6. I Caught a Fish This Big! Average
7. Trolling For Trout Average
8. State-ly Fishing Average
9. Untouchable Average
10. Gone Fishing Average
11. Sailfish takes a Selfie Average
12. Trout of Africa Average