U.S. states have a favorite tree, fossil, mineral and flower. They also have an official state fish, or fishes. See if you can match the fish in these pictures with the state that claims them.

Quiz Answer Key and Fun Facts
1. Wisconsin's state fish is considered an ambush predator, one that waits for prey to approach and then suddenly attacks it. Which of these is it?

The muskellunge belongs to the pike and pickerel family. Its name originates from the Ojibwa Indian word maashkinoozhe, meaning "ugly pike". A ferocious fighter when on a fishing line, the muskie was named Wisconsin's state fish in 1955.
2. Some U.S. states that border oceans have official freshwater and saltwater fish. What is California's marine (saltwater) fish?

The adult Garibaldi is a bright orange color. It is the largest of the damselfish family. Named after the Italian general Guiseppe Garibaldi, it became the state marine fish in 1995 when California Assemblyman William Morrow tucked an amendment naming it thus into a state bill meant to protect the Garibaldi from overharvesting.
3. Vermont is landlocked so it doesn't have a saltwater state fish but it does have cold and warm water fishes. Which is Vermont's cold water state fish?

Salvelinus fontinalis is called a brook trout but is actually a char. Besides Vermont, it is the state fish of Michigan, New Hampshire, New Jersey, New York, North Carolina, Pennsylvania, Virginia and West Virginia. Vermont's warm water fish is the walleye or walleyed pike.
4. Iowa has many warm, slow-moving streams and rivers and the state's premier gamefish is right at home there. Though seen on the rocks here, who is more at home in the mud?

Channel 'cats' are found throughout lower Canada and much of the U.S. east of the Rocky Mountains. They are the most sought-after catfish species and besides Iowa, Missouri, Nebraska and Tennessee named it their state fish.
5. You can call it a bream, you can call it a brim, but in Illinois what should you call it?

Bluegills like streams, rivers, ponds, lakes, shallow water, deep water - they don't care - but they like to hide around underwater tree stumps and water plants so they can be hard to cast a fishing lure to. In 1960, Chicago mayor Richard Daley presented some to Japanese crown prince Akihito, who gave them to fishing research agencies in Japan.

Some escaped and became an aggressive, invasive species, particularly in Shiga Prefecture; the emperor later apologized. In 1986, Illinois school children nominated the bluegill for state fish and the state legislature obliged.
6. Fishing is a large sport in much of the U.S. Georgia fishermen are no exception when they cast for their state fish. What do we call it?

Bass fishing is very popular, especially in the southern United States because of the warm waters which bass prefer. The largemouth bass has been Georgia's state fish since 1970. Some bass fishing derbies offer large cash and merchandise prizes.
7. Arizona's state fish is one that is only found in that state. Do you know its name?

The yellowish-gold Apache trout is one of two species native to Arizona (the gila trout being the other). Originally having a range of about 600 mi/970 km in the White Mountains in the eastern part of the state, by the 1960s the range had been reduced to about 30 mi/48 km.

It is considered a threatened species but with federal and state hatcheries rearing them, fishing for Apache trout is allowed in limited areas. Apparently none have been introduced outside of the state borders.
8. Originally Alabama's state fish and later its saltwater fish, which of these fish can weigh up to 100 lbs/45 kilos?

The fighting (or Atlantic) tarpon became Alabama's state fish in 1955. Because of its tenaciousness when hooked, it is a favored game fish, but it's very bony and it doesn't taste very good, so it's a catch-and-release fish. It was named Alabama's saltwater fish in 1975 when the largemouth bass was named the state's freshwater fish.
9. Here is a very unhappy-looking fish, but what a meal! Which fish is it that people travel to Alaska from all over the world to catch?

The king (or chinook) salmon is native to the Pacific coast of North America and is the largest of the salmon species. Salmon live in the ocean but return to freshwater to spawn. The female deposits up to a total of 14,000 eggs in several nests. A classic Alaska picture is of grizzly bears catching salmon in their mouths as the fish make their upstream runs in the summer.
10. North Dakota has some wild terrain and a state fish to match. Which of these grows to a substantial size in the Peace Garden State?

The northern pike is spread over much of North America and northern Europe. Another strong-willed member of the Esox genus, they grow to be large by freshwater fish standards. The yellow stripes of the immature pike in the picture will turn to yellow spots as the fish matures. Known for their many sharp teeth, pike require an angler to be careful when unhooking them; a long set of forceps is often used.
Source: Author CmdrK 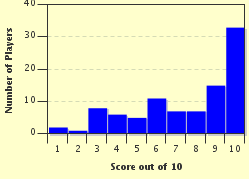 Related Quizzes
1. Fish Easier
2. Catch Them If You Can! Easier
3. Watch Out! They're Dangerous! Easier
4. I Caught What?! Easier
5. The Cold, the Wet and the Ugly Average
6. I Caught a Fish This Big! Average
7. Trolling For Trout Average
8. Going Fishing Average
9. Untouchable Average
10. Gone Fishing Average
11. Sailfish takes a Selfie Average
12. Trout of Africa Average