This quiz features actors who were born and/or raised in the great state of Illinois.

Born and raised in Wilmette, Illinois, Bill Murray is the fifth of nine children; including brother actors, Brian-Doyle, John, and Joel Murray. Bill was a member of the "Saturday Night Live" cast for three years in the late '70s. He starred in the 1981 comedy "Stripes" with fellow Illinois native, and "Ghostbusters" co-star, Harold Ramis.
2. Known for his role as Lieutenant Dan Taylor in "Forrest Gump", what Illinois born actor directed and starred in the novel based film "Of Mice and Men"?

Gary Sinise was born in Blue Island, Illinois, and raised in Highland Park. The actor co-starred with Tom Hanks in 1994's "Forrest Gump", where he gave a spectacular performance as Lieutenant Dan Taylor. In 1991, Sinise played George Milton in the screen adaptation of John Steinbeck's novel "Of Mice and Men"; Sinise also directed the film.
3. What Illinois born actor was part of Chicago's Steppenwolf Theatre before going on to star in such films as "Death of a Salesman", "Con Air" and a little movie featuring his own name in the title?

John Malkovich was born in Christopher, Illinois and raised in Benton. In the late '70's Malkovich joined Chicago's Steppenwolf Theatre; which was co-founded by friend and future "Of Mice and Men" co-star Gary Sinise. Malkovich gave an exceptional performance as Biff Loman in 1985's "Death of a Salesmen".

He played Cyrus "The Virus" in 1997's "Con Air". Malkovich took part in the 1999 black-comedy "Being John Malkovich", where an eccentric group of people take over the actor's body by entering a portal hidden in a New York City office building.
4. Raised in Illinois, what "Toy Story 2" co-star grew up in Evanston along with sibling actors, Ann, Bill, Susie, and John?

Though born in New York City, Joan Cusack and her siblings Ann, Bill, Susie, and John grew up in Evanston, Illinois. Joan has been acting since the 1980s. She stars in such films as "Nine Months", and "School of Rock". In 1999, Joan lent her voice to Jessie the Cowgirl when she joined the "Toy Story" cast for the movies second installment.
5. Born and raised in Chicago, Illinois, what actor, better known for his comedic roles in movies like "Talladega Nights" and "Step Brothers", shows off his acting talents in the films "The Good Girl" and "Chicago"?

Illinois native John C. Reilly has been acting since the late '80s. Reilly gained mainstream fame after co-starring with Will Ferrel in the comedies "Talladega Nights" (2006) and "Step Brothers" (2008). Reilly was nominated for his role in the 2002 Independent film "The Good Girl". He also played in the Academy awarding winning film "Chicago".
6. Born in Belgium, but raised in both Oak Park and Chicago, Illinois, what actor spent five seasons in the fictional town of Lanford, Illinois, as a member of the "Roseanne" cast?

Johnny Galecki was born in Belgium. His family moved to Oak Park, Illinois when he was three years old. Galecki was raised in Chicago. In 1992, he landed the role of David Healy on the hit sitcom "Roseanne". Johnny's recent work includes playing Leonard Hofstadter on the CBS hit show "The Big Bang Theory".
7. Born and raised in Rochelle, Illinois, what talented actor starred in the films "The Upside of Anger", and "The Notebook"?

Rochelle native Joan Allen started her film career in the 1980s. Allen won a Chicago Film Critics award for her role in the 2005 Mike Binder directed film "The Upside of Anger". Audiences know Joan for her role as protective mother, Anne Hamilton in the Nicolas Sparks' book based movie "The Notebook", and for her part as Pamela Landy in the "Bourne" series ("The Bourne Supremacy" and "The Bourne Ultimatum").
8. What Chicago born star was part of "Saturday Nigh Live" and went on to play such characters as Bluto, and Jake Blue?

John Belushi was born in Chicago, and raised in DuPage County, Illinois. Belushi spent four years as a member of the "Saturday Night Live" cast. He played the memorable John "Bluto" Blutarsky in 1978's "Animal House", and he a Dan Aykroyd starred as Jake and Elwood Blue in 1980's "The Blues Brothers". John Belushi died of a drug overdose in 1982 at the age of 33.
9. What Illinois born Indie actor plays in "Boys Don't Cry", "Garden State", and "Green Lantern"?

Peter Sarsgaard was born near Belleville in St. Clair County, Illinois. The charming actor got his start in Independent films such as 1999's "Boys Don't Cry". Sarsgaard also co-starred with Natalie Portman in 2004's "Garden State". Peter's talent shines in more mainstream movies like "Jarhead", and the 2011 hero-adventure movie "Green Lantern".
10. Born and raised in Illinois, what actor has played D'Artagnan, Ernest Hemingway, and Richard Grayson, aka Robin?

Chris O'Donnell was born in Winnetka, and lived in Willmette, Illinois. As a young actor, O'Donnel starred alongside Al Pacino in "Scent of a Woman"; the role earned Chris a Golden Globe nomination. He went on to play D'Artagnan in 1993's "The Three Musketeers", a young Ernest Hemingway in "In Love and War", and Batman's sidekick, Robin in both "Batman Forever", and "Batman and Robin".
Source: Author HannahConner88

This quiz was reviewed by FunTrivia editor skunkee before going online.
Any errors found in FunTrivia content are routinely corrected through our feedback system.
Most Recent Scores
Jan 27 2023 : notsosmart49: 10/10
Dec 10 2022 : Hayes1953: 2/10 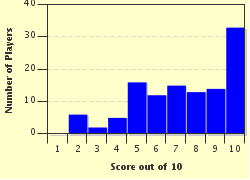 
Other Destinations
Explore Other Quizzes by HannahConner88