Magaret Hamilton will forever be remembered as the Wicked Witch of the West in MGM's 1939 movie classic "The Wizard of Oz". Here are a few questions on her life and roles. Have fun.

Margaret Hamilton was born on December 9th, 1902, in Cleveland, Ohio. She was the youngest of four children.
2. What was Margaret's occupation before she began acting?

At the insistence of her parents, Margaret Hamilton obtained her teaching certificate in 1923, from Wheelock Kindergarten Teaching School in Boston. She used to say that as the Wicked Witch of the West, she had frightened more children than anyone else, but she really loved children very much.
3. The great sorrow in Margaret's life was that she never married and had a child of her own?

Margaret Hamilton was married to Paul Boynton Meserve, a landscape architect, on June 13th, 1931. The couple had one child, Hamilton Wadsworth Meserve. By all accounts it was not a happy marriage, and the couple divorced in 1938.
4. In what year did Margaret make her film debut in "Another Language"?

In 1933 Margaret made her film debut in "Another Language" which starred Helen Hayes and Robert Mitchum.
5. Which of the following statements about Margaret and the MGM 1939 film "The Wizard Of Oz" is not correct?


Answer: She was the first choice to play the Wicked Witch.

Mervyn Le Roy's first choice to play the Wicked Witch was Gale Sondergaard. He envisioned a glamorous witch clothed in a tight, black, sequined dress with a sequined hat. On August 20th, 1938, MGM announced Sondergaard would be cast as the Wicked Witch.

But when others involved in the film vetoed the idea of a glamorous witch, Gale Sondergaard bowed out, and on October 10th, 1938, MGM announced that Margaret Hamilton would be playing the Wicked Witch. On December 23rd, 1938, during the fourth take of the Wicked Witch's disappearance from Munchkinland scene, her broom and hat caught fire.

She received burns about her face and a severe burn on her hand. Complicating matters, the green makeup she wore contained copper oxide, and it had to be removed before her burns could be treated.

She had to be extrememly careful having meals to keep from ingesting her makeup. It took two hours to apply, so it was not removed before she ate. She was off the set for six weeks while her burns healed.
6. Margaret Hamilton was several inches taller and many years older than actress Billie Burke who played Glinda in "The Wizard Of Oz" ?

Margaret Hamilton was 37 years old when "The Wizard Of Oz" was released. She was a petite lady, standing only 5 feet tall and weighing 115 pounds. The lovely Billie Burke was 54 years old when she played Glinda. She was 5 ft 10 in tall. I would have sworn that the Wicked Witch was at least 6 feet tall the first time I saw the movie as a child.
7. Which of the following films did Margaret not appear in?


Answer: Gone With The Wind

"Gone With The Wind" was 1939's other classic movie, but Margaret did not appear in it. In 1943, she played Mrs. Gideon in "My Little Chickadee" which starred Mae West and W.C. Fields. She made "The Adventures of Tom Sawyer" in 1938, playing the part of Mrs. Harper. "The Red Pony" was released in 1949, starring Myrna Loy and Robert Mitchum, with Magaret playing the part of the teacher.
8. Margaret played the part of Hester Frump, Mortica Addams' mother, on the 1960s sitcom "The Addams Family" which starred John Astin and Carolyn Jones.

Do you remember the wonderfully weird show "The Addams Family"? They were the "creepy and kooky" family that lived at 000 Cemetery Lane. She played Hester Frump in 3 episodes of "The Addams Family": "Mortica's Romance" parts 1 and 2, which was first shown on September 24th, 1965 and October 1st, 1965.

She was also in "Happy Birthday, Grandma Frump" which was first shown on February 11th, 1966.
9. Which Sid and Marty Krofft children's television show did Margaret appear in during the early 1970's?


Answer: Sigmund and the Sea Monsters

Miss Eddels, the noisy neighbor, was played by Margaret Hamilton. The cast also included: Billy Barty (Sigmund), Johnny Whitaker (Johnny Stuart), and Scott Kolden (Scott Stuart). "Sigmund and the Sea Monsters" first aired on September 8th, 1973, and it was about the misadventures of two young brothers who find and bring home a sea monster.
10. In the 1970s, Margaret was the spokesperson in a very successful series of television commericals selling what product?

In the 1970's, Margaret Hamilton was the spokesperson in a very successful series of Maxwell House coffee commericals. Do you remember her as Cora? Margaret Hamilton, the sweet, gracious lady who loved children, died of a heartattack on May 16th, 1985 -- but she will forever be my favorite "Oz" character -- the Wicked Witch of the West. Thank you for taking my Margaret Hamilton quiz.
Source: Author LindaC007 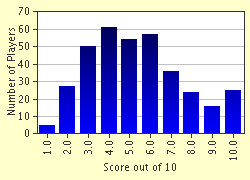 
Other Destinations
Explore Other Quizzes by LindaC007