All through the history of popular music, musicians have passed on prematurely. This quiz pays tribute to those fallen heroes of rock 'n roll.

Quiz Answer Key and Fun Facts
1. Otis Redding was one of the most gifted and soulful singers of his era. His life was prematurely ended when his small plane crashed in Madison, Wisconsin. What was the name of the group that was serving as Redding's back-up band that also lost four members in the crash?

The loss of these four members nearly dismantled the band, but they regrouped and achieved critical and commercial success throughout the 70s and 80s. Ben Cauley, trumpet player of the Bar-Kays, survived the crash. Along with bassist James Alexander, who was not on the ill-fated flight, they rebuilt the group from the ground up and went on to chart several top ten singles on Billboard's Black Singles chart including "Shake Your Rump to the Funk" and "Hit and Run".
2. Guitar legend Duane Allman was killed in October of 1971 when his motorcycle crashed in Macon, Georgia. Duane had barely established himself as a musical force before his tragic accident, with only approximately two years of recording and touring under his belt. In addition to his incredible work with his brother, Greg, in The Allman Brothers Band, Duane performed session work on many established artist's works. Of the albums listed below, which one included Duane as a featured artist?


Answer: Derek and the Dominos - "Layla...and Other Assorted Lovesongs"

Duane Allman was killed when he avoided a collision with a truck on a rural highway in Macon, Georgia on October 29, 1971, just 14 days after the live album "Live at Fillmore East" was certified as a gold album. Duane worked as a session musician at Fame Studios in Muscle Shoals, Alabama where he recorded songs with the likes of Wilson Pickett, Aretha Franklin and King Curtis.
3. The Buckley family was faced with two premature deaths. Tim Buckley was a songwriting marvel in the 60s and 70s when he died of a heroin overdose. His son, Jeff, was more than just a benefit of his father's name, he was a truly inspired and talented songwriter of his own merit. Unfortunately, Jeff died from drowning while swimming in the Mississippi River in 1997. What is the name of Jeff's debut album, which he released in 1994?

Because of Tim Buckley's cult-like following, the debut album from Jeff was highly anticipated by the leagues of fans of his fathers. Many were disappointed because of the difference in their style, voice and musical selections. Those who were looking for a Tim Buckley style album wrote this off as a failure.

They found it to be audacious and over-bearing. Those who gave the album a chance to stand on its own found it to be passionate, well produced and brilliantly written. The high points of the album are the title track and the song "Last Goodbye".
4. Def Leppard lost their guitar player, Steve Clark, to alcoholism in 1991. Many overlook Clark's abilities because of the type music he played, yet in fact, he was a classically trained guitarist with immeasurable talent. One of the most constant factors in the late artist's life was his choice in the guitars he played. Which brand was Clark's preference?

Probably the most famous guitar in rock music would be the Gibson Les Paul. Steve Clark played the Les Paul model because of all the guitarists who influenced him who played that same model. Guys like Jimmy Page, Mick Ronson and Scott Gorham all played the Les Paul, so Clark decided he should also play the Les Paul. Clark was found dead in his London apartment on January 8, 1991.
5. Nicholas "Razzle" Dingley was the drummer for up and coming band Hanoi Rocks when his life prematurely ended in a car accident. Driving the car was the singer of a very established band in southern California. Who was the driver of the car that killed "Razzle"?

Vince Neil was driving his car at high rates of speed in Redondo Beach, California while under the influence of drug and alcohol. Neil lost control of his car and skidded into an oncoming car, killing his passenger and seriously injuring the passengers in the other vehicle. Neil escaped jail time by entering rehabilitation for his drug and alcohol use and paying the injured passengers an unspecified amount of money for damages.
6. Many artists die prematurely due to medical reasons. Which singer of Black Sabbath and Badlands passed away in 1993 due to complications with the HIV virus?

Ray Gillen performed with Black Sabbath in 1987. I feel that his work with Jake E. Lee's solo group, Badlands, was truer to his musical roots and his performances were remarkably improved over those with his stint with Black Sabbath. Gillen also worked with the John Sykes band, Blue Murder. Sadly, Gillen passed away in New Jersey in December of 1993 due to the dreadful virus.
7. Many times, extremely successful bands are duped out of moneys owed to them due to poor management, bad contracts and unscrupulous accounting. This band saw two of their key members commit suicide by hanging due to the stress caused from never realizing profits the band members were owed.

On April 23, 1975, Pete Ham realized that he was never going to see the money that he or his band was owed by his record label. He was broke, depressed and had a daughter on the way. With no way to support himself or his family, he decided to take his own life, hanging himself in his garage. Tom Evans was another member of Badfinger to commit suicide.

He was faced with the inevitability that the conflicts and legal situations that surrounded the band were not going to ever pass. In 1983, after a lengthy and rather nasty fight with fellow band member Joey Molland over the telephone, years and years of financial turmoil and band conflict finally took its toll on Evans and he hanged himself.
8. Steve Gaines was the guitarist in a successful southern rock band. His sister Cassie was a backing vocalist. On October 20, 1977 a plane carrying band members crashed in Mississippi, killing Steve, Cassie and the group's lead vocalist. Which band was involved in this disaster?

Along with the Gaines siblings, Lynyrd Skynyrd lost vocalist Ronnie Van Zant. The band had released their album "Street Survivors" only three days before the crash. On the album cover, many of the band members appeared to be in flames. After the accident, the album cover was changed for obvious reasons.
9. Randy Rhoads, legendary guitarist from Ozzy Osbourne's band, was killed in a small plane crash in 1982 when the pilot was trying to "buzz" the tour bus carrying Ozzy and the rest of the band. Most people who know of Rhoads life know that he was the founding guitarist of the band Quiet Riot. Unfortunately for the band, they could never secure a US record deal, but they did release two albums in another country. Which country saw the release of the albums "Quiet Riot" and "Quiet Riot II"?

The pair of albums are considered a must have for any Randy Rhoads fan. The albums were never able to be marketed to US record companies due to disco-mania. It was the late 1970's and America was enamored with disco. The band shopped their material internationally, and CBS-Japan picked up on the band. Fans of Quiet Riot will remember the tune "Slick Black Cadillac" from the "Metal Health" album.

The song originally appeared on "Quiet Riot II" with Rhoads providing a very different sound than Carlos Cavazo's interpretation.
10. It has been falsely claimed that "Mama" Cass Elliot, singer with The Mamas and The Papas, died while consuming a ham sandwich. In fact, the cause of death was determined to be from a medical occurrence. Of the following, which is responsible for the death of the portly "Mama" Cass?

After performing a series of sold out solo concerts at the London Palladium, Elliot died from a condition described as "heart failure due to fatty myocardial degeneration due to obesity" according to the coroner report. The report also showed that Elliot had not consumed any type sandwich that day, and in fact had only a small amount of food in her system.

There were also no drugs or alcohol involved in her passing. Elliot was posthumously inducted into the Rock and Roll Hall of Fame in 1998 as a member of The Mamas and The Papas.
Source: Author ralzzz 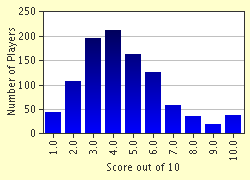