There were many great radio shows before television came about...one of these was "Sorry, Wrong Number" featuring Agnes Moorehead. How much do you remember about this great "Suspense" show?

Quiz Answer Key and Fun Facts
1. What was the name of the gentleman mentioned in the first phone call?

This was when Mrs. Stevenson was connected to the wrong number...the voice said, "yeah, this is George speaking." This phone call is what led her to believe that a murder was going to be committed.
2. What time was the murder to be committed?

This was the time that the train passed by so that any screams from the victim would not be heard.
3. What was Mrs. Stevenson's phone number?

She gives this information to the chief operator when she insists that the call she overheard about the murder be traced.
4. What was the name of the police sergeant that answered Mrs. Stevenson's call about the planned murder?

He was Sergeant Martin of Precinct 43.
5. What was Mrs. Stevenson's address?

She gives this information to the police during her first call to them about the planned murder.
6. What bridge did Mrs. Stevenson live near?

Mrs. Stevenson commented that her maid Eloise is "a big girl, she weighs 200 pounds."
8. The phone line to the police department was busy at one point in the program.

Mrs. Stevenson commented that there must be other lines available...but indeed, the line was busy.
9. According to the Western Union telegram, what city did Mr. Stevenson leave for?

The Western Union Agent called and read the telegram stating that Mr. Stevenson had left for Boston, causing Mrs. Stevenson to go further into a hilarious rage.
10. What is the phone number of Henchley Hospital?

This was the hospital that Mrs. Stevenson contacted to try to hire a private nurse for the night. However, she was told that there was a shortage of such since it was "the war time."
Source: Author parlet 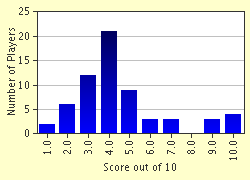 
Other Destinations
Explore Other Quizzes by parlet