Hi this quiz about Harry Potter Book Six. My favorite so far. The questions will be from chapters 1-10. This quiz may contain spoilers. Good Luck!

Share on Facebook
Share on Twitter
Share by E-Mail
Author
harrynhermione
Time
3 mins
Type
Multiple Choice
Quiz #
214,649
Updated
Dec 03 21
# Qns
10
Difficulty
Average
Avg Score
8 / 10
Plays
6137
This quiz has 2 formats: you can play it as a or as shown below.
Scroll down to the bottom for the answer key.

Quiz Answer Key and Fun Facts
1. In what month did the Prime Minister of Muggles say it wasn't normal to have a chilly mist?

It was in the middle of July when the Prime Minister of Muggles stated this fact.
2. What does Bellatrix call the place where Snape lives?

In the book it proves that Harry has indeed inherited Grimmauld Place. All he had to do was to tell Kreacher the house elf to "shut up" and Kreacher obeyed.
4. What village is Professor Slughorn currently staying in?

Professor Slughorn is currently staying in Budleigh Babberton. He states later in the chapter that he moves from place to place very often.
5. What kind of soup did Mrs. Weasley make for Harry when he arrived at the Burrow?

Harry enjoys a nice hot bowl of onion soup along with some bread.
6. Who was the security person who met Harry, Hermione, and the Weasley family at Diagon Alley?

None other than the the Care of Magical Creatures Professor, Hagrid.
7. Whose father is serving time in Azkaban for being a Death Eater?

Malfoy's father is in Azkaban. Marcus Belby and Cormac McLaggen are in the Slug Club along with Harry, Neville, and Ginny. Borgin is the wizard who runs a dark wizarding store.
8. What healing spell did Tonks perform on Harry to fix his nose?

Episkey is the spell that fixed Harry's nose. Sectumsempra is a spell that Harry learned from the Half-Blood Prince, Reparo is a fixing spell, but it wasn't used to fix Harry's nose and Accio is a Summoning Spell.
9. Who gave Harry the parchment from Dumbledore on the way to a break period?

Jack Sloper is also a Beater on the last years Gryffindor Quidditch team.
10. What is Voldemort's grandfather's first name?

Marvolo was Voldemort's grandfather's first name. It is also Voldemort's former middle name. Merope is Voldemort's mother, and Salazar of course is the founder of Slytherin House in Hogwarts. Hope you enjoyed the quiz!
Source: Author harrynhermione

This quiz was reviewed by FunTrivia editor minch before going online.
Any errors found in FunTrivia content are routinely corrected through our feedback system.
Most Recent Scores
Jan 04 2023 : klem2go2: 9/10
Dec 14 2022 : Guest 80: 5/10 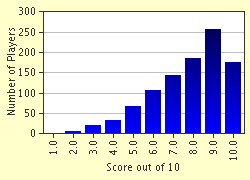 
Other Destinations
Explore Other Quizzes by harrynhermione