Some things are all around us. Sometimes you can't see or touch them, but they are still there. Sometimes you just take them for granted. Can you identify these things from the clues given?

Quiz Answer Key and Fun Facts
1. If this thing didn't exist we would all leave the ground and float in the air. What is it?

Gravity is the force that keeps us all anchored to the earth. Every time you jump and come back down, or drop a book, or throw a ball into the air and catch it as it comes back that is gravity at work. Without it everyone and everything on Earth would just float off into space.
2. There are billions of these, and even when you can't see them they are always there, twinkling away up in the sky. What are they?

No-one knows how many stars there are in the sky as new ones are being made all the time. All stars are big balls of gas, and many of the ones we can see in the sky are so far away it would take hundreds of years to reach them in a spaceship. Even when the sun is out they are still there, but because the light from the sun is so much brighter than the light from stars you can't see them in daylight.
3. They are on your skin, in the air, in the soil. Some of them make you ill, some are good for you. You can't see them, but there are millions of them. Millions of what?

Some bacteria cause diseases, such as plague, cholera and tuberculosis. Many are necessary to life cycles, as they break down dead material so it can be absorbed by the soil. They are too small to see or touch, but it is estimated there are around forty million of them in one gram of soil.
4. You can see it, touch it and taste it. It is vital for life and over 50% of the planet is covered in it. What is this?

Every living thing needs water either to drink or to live in. The seas and oceans support, among others, fish, whales, dolphins and species we haven't even properly identified yet. All crops and plants need water, either from irrigation or from rain, to grow properly, and if we didn't drink enough water we would die from dehydration.
5. Without this we wouldn't have anything to stand on. It can go thousands of feet up into the air, or deep down into the ground below our feet. What is this solid matter?

Planet Earth is basically rock. It goes up into mountains and down into the ground. Volcanoes throw out lava, which is liquid rock, and this solidifies as it cools down. There are lots of different types of rock, granite, basalt, and limestone being just some.
6. Plants and trees give out this gas; you can't see it, but without it you couldn't breathe. Which gas is it?

We breathe in oxygen and breathe out carbon dioxide. Plants and trees take in carbon dioxide and give out oxygen. Without oxygen we would not be able to live, so the green areas of our planet are very important as they help sustain life.
7. You can definitely see and touch these eight legged creatures, although sometimes you would rather not. Some people are very scared of them. They live everywhere except the Arctic and Antarctic. What are they?

Spiders range from very small, almost too small to see, to ones as big as an adult's hand. Some have a poisonous bite. They are noted for the intricate webs that they spin. In an experiment on Skylab it was shown that spiders will spin webs even in zero gravity.
8. With the right equipment you can hear and see the result of these on electronic equipment that is very common in a house's lounge room, but you can't see the things themselves. The air is full of them: what are they?

Radio and television programmes are transmitted by things called waves, which are then picked up by your aerial or satellite dish and translated into the sound and pictures you see on your television or hear on your radio. Sometimes they come into your home by a cable instead of through an aerial or dish, but they still start off as waves, they are just collected and translated by the cable company instead.
9. Too high a dose of this, such as you might get from a bomb, is dangerous. It is however present all the time as a natural thing. What is it?

The earth has what is called "background radiation", which is low level radioactivity. This comes from space, underground gases such as radon, and elements within the earth like uranium. The amount of radiation you are exposed to from these sources varies according to where you live, but is very low and not dangerous.
10. You take it for granted that this will work. Without it your computer would not work and you would spend a lot of time in the dark. What is this vital thing?

It is hard to believe that there was a time without electricity. People used to only have candles to light their houses by, then later gas lights. No television, no radio, no computers. The first house in Britain to be lit by electricity was Cragside, in Northumberland, and the first factory making electric light bulbs was in Benwell.
Source: Author Christinap 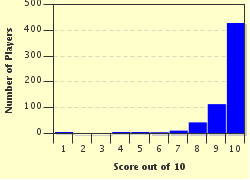 Related Quizzes
This quiz is part of series Commission #19:

Not one...not two...but three things graced each title from this Quiz Commission in the Author Lounge from August 2011. Our authors covered all the bases with this challenge!