How much do you remember about "Harry Potter and the Goblet of Fire" by J. K. Rowling? Test your knowledge now.

Quiz Answer Key and Fun Facts
1. During the third task, which magical creature was blocking the way towards the Triwizard cup, only allowing entry after a correct answer to a riddle?

A sphinx blocked the path leading to the Triwizard cup. She asked Harry a riddle. A correct answer on the first try would let him pass safely; a wrong answer and he would be attacked.

"First think of a person who lives in disguise,
Who deals in secrets and tells naught but lies.
Next, tell me what's always the last thing to mend,
The middle of middle and end of end?
And finally give me the sound often heard
During the search for a hard-to-find word?
Now string them together, and answer me this,
Which creature would you be unwilling to kiss?"

The answer was a spider.
2. The night before the second task, which book did Harry fall asleep on in the library?

Before waking up, Harry Potter's head was rested on "Where There's a Wand, There's a Way".

"Weird Wizarding Dilemmas" was a book Hermione and Harry were looking through in the library before the task.
"Magical Water Plants of the Mediterranean" was the book that Moody gave Neville that had gillyweed in it.
"Flying with the Cannons" was the book that Harry woke up on after he had the dream about Frank Bryce and Voldemort.
3. What did Dumbledore eat at the Yule Ball?

Dumbledore picked up his menu and simply said, "pork chops". Pork chops suddenly appeared on his plate. Harry thought that it meant extra work for the house elves.
4. Who did Frank Bryce think the intruders were at the Riddle house?


Answer: Boys from the village

Frank Bryce thought it was boys from the village in the Riddle house because they were always throwing stones at the window and doing other things to the property. He went upstairs, and found it was Wormatail, Voldemort, and Nagini at the house. They then killed Frank Bryce for listening in.
5. What did Mr. Crouch call Percy?

Mr. Crouch never got Percy Weasley's name right, and always called him Weatherby. Ron thought that was particularly funny because of the way Percy honored Mr. Crouch.
6. What did Fleur do to get past the Welsh Green?


Answer: Used a charm that made the dragon sleepy

Fleur put the Welsh Green in a trance, and made the dragon sleepy. Then, it snored, and a great jet stream of fire caught on her skirt. She had to put it out with water.
7. Who is Hagrid's mother?

According to Rita Skeeter, Fridwulfa's whereabouts are currently unknown. Giants are bloodthirsty and brutal, and are currently headed towards extinction due to the fact that they fight against themselves. Many giants sided with Lord Voldemort during The First Wizarding War.
8. What did Ron give Harry for Christmas?


Answer: A bag of dungbombs

Ron gave Harry a bag of dungbombs. Hagrid gave him the box of sweets. Harry had already received a set of wizard's chess from a wizard cracker during his first year. He had gotten "Flying with the Cannons" from Ron the previous year.
9. Who did Fleur go to the Yule ball with?

Roger Davies, captain of the Ravenclaw quidditch team, was taken by the part-Veela charm of Fleur. He was looking at her the whole time and wasn't even paying attention to what she was saying. Fred Weasley went with Angelina Johnson. Cedric Diggory went with Cho Chang.
10. Which class did Harry collapse in?

Harry collapsed in Divination. He first heard an insect humming and then dozed off. In his dream, he was first riding on an eagle owl until he reached a room. In the room, there were Wormtail and Voldemort. Voldemort decided not to kill Wormtail. He decided to wait to feed Nagini and then perform the Cruciatus Curse on Wormtail. Harry woke up and immediately went to Dumbledore's office.
Source: Author sarajane22 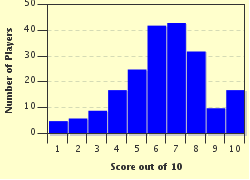 
Other Destinations
Explore Other Quizzes by sarajane22