Quiz Answer Key and Fun Facts
1. What is the mist-like energy known as?

Ectoplasm is most commonly seen in outdoor haunted places, such as graveyards. It can also give a cold feeling to people near it.
2. Containing the Grey Room, what is considered one of the most haunted places in the world?

Chillingham Castle has had many murders in its years. Most of the people murdered still haunt the place today. Chillingham is the home of the famous Grey Room. No one has been able to sleep in this room because of the feeling of being watched. There is also the Pink Room which is where a boy had been murdered and has been seen here ever since.
3. What does EMF stand for?

Ghosts are known/believed to create EMFs and detectors can measure how much is in the area.
4. Which one of these is FALSE about orbs?


Answer: They have never been caught on tape

The statement that they have never been caught on tape is false. They have been caught with video cameras and have even been on t.v. before.
5. What kind of ghost is considered the 'playful' ghost because it knocks stuff off of shelves, shuts doors, etc. but has been known to hurt and even kill people?

Poltergeists are the playful ghosts, orbs are the balls of energy, shadow people are stalker-type ghosts, and 'time' ghosts are manifestations that are from another time that appear to be going about their business as if they are still in the time period they died in.
6. True or false: One of the things people forget about the most while ghost hunting is to ask permission before going on someone's property?

This can be considered trespassing.
7. Which one of these is most often confused with orbs in ghost pictures?

Cigarette smoke is usually mistaken with ectoplasm, not orbs. As for the other things, they aren't as commonly mistaken for orbs as dust is. Dust can be kicked up from a path or the ground. When you take a picture, all of this dust is in the air and the flash makes the dust appear bright and looks like an orb.
8. Which type of ghosts are known as "stalker" ghosts because they follow certain people while hiding in the darkness?

I don't know a whole lot about these guys. I've heard stories about them, though. They usually seem pretty creepy, not nice, and have even been violent with the people they follow.
9. Which of these Universities is best known for its ghosts?

Ohio University is one of the most haunted places in America. It has a lot of history as of why, but it is mostly because it is the center of five cemeteries that make the shape of a star around the campus.
10. What kind of ghost energy is usually seen in graveyards and resembles mist or smoke?

Graveyards are the best place to go if you want to see ectoplasm. Other things such as orbs can be seen in graveyards but ectoplasm is by far the most common.
Source: Author Teej417 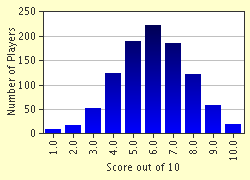 
Other Destinations
Explore Other Quizzes by Teej417

Go to The Unexplained Quizzes