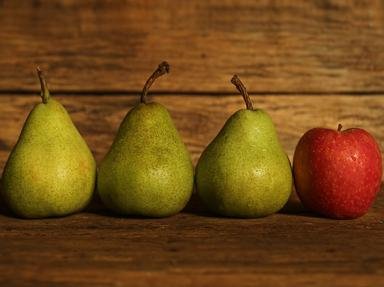 Mixed Quiz: Odd One Out | 15 Questions

A broad range of questions in which you are asked to name 'The odd one out'. Have fun!

Quiz Answer Key and Fun Facts
1. Who is the odd one out by career?

Thought by many as the best basketball player in the world. He got the nickname of 'Magic' when he was just 15 at Everett High School... Johnson's mother, a devout Christian, thought that the name was blasphemous!
Oh, by the way the others are all actors.
2. Which of the following is the dated odd one out?

The Battle of Verdun took place from February to December 1916 between the German and French forces, the French were defending the town of Verdun. Fighting was very fierce with heavy losses to both sides. German losses, 328,500. French losses, 348,300. And at the end of December...the French lines were re-established more or less where they were in February!
The Battle of Stalingrad was the turning point of the war for Russia, in the final stand on 2 February 1943, 195,000 Germans, the remains of an army that numbered 330,000 in November 1942, died or were taken prisoner.
The Battle of El Alamein 1942. British Field Marshall Montgomery and German Field Marshall Rommell. Another turning point in the war. On 23 October 1,000 British guns on a six mile front laid down a 15 minute bombardment prior to the British and Commonwealth troops attack. Rommell was defeated by Nov losing 55,000 men, 450 tanks and 1,000 guns. The Allies lost 13,000 men.
The Battle of Tobruk, or rather the defense of Tobruk. The town was finally overrun by German forces on June 20th 1942. The British Eighth Army had left a garrison force to hold the town, and despite the fact that four companies of allied infantry fought their way out, 28,000 allied prisoners were taken.
3. Which of these singers is the odd one out?

Barbra Streisand's career has involved every medium; she is an actress, singer, songwriter, producer, director. In not so many words, she is a legend in her lifetime.
The others are all opera singers.
Pavarotti and Domingo are two of the famous 'Three Tenors'.
Maria Callas the Greek diva was given a standing ovation on her debut in London in 1952.
4. They share the same name, but who is the odd one out?

One thing you can say about Heinrich Karl Marx....he wasn't funny. German economist and founder of international revolutionary socialism. In 1849 Marx went to London where he lived the rest of his life until he died in 1883. He is buried in Highgate cemetery where his tomb is a favourite with tourists.
Do you know there were originally five Marx brothers? Gummo left very early while Zeppo retired after making 'Duck Soup' in 1934.
5. Constellations are patterns amongst the stars. There are 88 constellations each with its own generic name and meaning. Which of the following is NOT a constellation?

Elgar was an English composer, known for the "Pomp and Circumstance" marches and the "Enigma Variations".

The others were inventors.
Emile Berliner: Microphone, Gramophone - you know, his trademark "Nipper" listening to 'His Master's Voice'.
Thomas Edison: He had little education yet he was granted 1,300 patents!
Alexander Bell: Telephone.
7. Which is NOT a cloud formation?

The name for an ancient mound of earth on a tomb or grave.
Cumulus is a form of cloud consisting of rounded masses heaped on horizontal base.
Cirrus, white wispy cloud usually at high altitude.
Nimbus, the cloud of glory otherwise known as a storm-cloud.
8. Which of these languages is the odd one out?

Tabby is NOT a breed, but a color pattern, whereas the others are all breeds of domestic pedigree cats. Surprisingly these were not common in the west until the late medieval period.
11. Think carefully, but don't see red and shout if you can't figure out which of these flags is the odd one out in terms of COLORS.

The flag is red, black and gold. The others are all red, white and blue.
Although America is not in Europe, it is not the odd one out because the question is asking about the flags, and the answers are nationalities, not countries.
12. Which of these is not a cheese?

Garibaldi is a biscuit containing currants.
Camembert is named after the village where it was and still is produced. It is bought in those familiar round wooden boxes.
Parmesan is a hard dry cheese ideal for pizzas.
Stilton - there are just seven dairies licensed to make this cheese and can only be made in three English counties, Derbyshire, Leicestshire and Nottinghamshire.
13. Which of these is the odd one out because it is not in New York?

This is a popular Square in London for entertainment and eating out. When Londoners say "We're going up West" that's where they're going.
Queens is one of the Boroughs of New York.
Harlem is a district of New York and the centre of a predominantly black population which originally migrated there from the southern states during the First World War.
Little Italy: with New York having the largest population of Italians outside of Italy...the name speaks for itself!
14. Which is the odd one out because it does NOT have an active Celtic culture?

The other three have a Celtic background, as does England--although in England only the western county of Cornwall still has a few Celtic connections and language but it's not spoken by many these days.

The name Celt was employed by ancient Greek writers to describe the tall fair-haired people of Northern Europe.

Ireland, Wales and Scotland all have their own form of the Gaelic language.
15. Which fungus is not edible?

Fly agaric is a large toadstool which has a creamy white stem & gills with a soft frill around its upper part. It's well known, as a poisonous species!
Chanterelle. Edible fungus. It is a woodland species of rich egg yellow colour & with the fragrance of Apricots.
Morel. Edible Fungus. It has a short white stem & a swollen head which is covered with a network of ribs. They are generally dried & used for flavouring.
Psalliota Campestris. The common mushroom in Britain and some other parts of Europe. It occurs profusely in pastures where horses have grazed.
Source: Author oldcodger 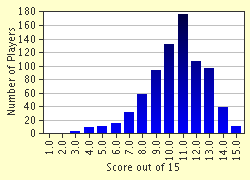 
Other Destinations
Explore Other Quizzes by oldcodger

More Odd One Out Quizzes