Mathematically, an odd number is a whole number that isn't evenly divisible by two. This quiz proves that odd numbers have much, much more to offer. Do you like your odds?

Quiz Answer Key and Fun Facts
1. The number 101 may seem an advanced one, but in North American slang it signifies something rather basic. In fact, you'll commonly find explanatory blog articles titled things like "Fashion 101" or "Nuclear Power 101." How did 101 pick up this meaning?

Universities tend to number their courses: "English 198" rolls off the tongue more easily than a complete course title like "Early Romantic Poets and Perspectives on the Vicarage." One common numbering scheme assigns 101 to each department's introductory course for possible majors in the field, reserving numbers below 100 for "Chemistry for Poets" and other offerings for non-majors.

Many universities use different systems -- for example, my first class as a physics major was "Physics 15a" -- but "101" is enshrined in popular culture.
2. When it comes to 21, the odds are more than just a way to describe the number. Which of these is another name for the casino card game 21?

The name 21 comes from the player's goal: to achieve a hand whose cards sum to a value as close to 21 as possible. Face cards are worth ten points each; an ace can serve as a one or a eleven. You can't get rid of the cards you've got, but you can get more from the dealer, so it's important to know the odds of drawing a card with a workable value.

After all, if you end up with a score above 21, you're toast!
3. In 1960, smooth criminal Danny Ocean bore a striking resemblance to Frank Sinatra; by 2001, he had aged into someone looking more like George Clooney. Even so, some important things remained the same. In each case, how many criminals did Ocean assemble to knock over casinos?

Accordingly, both movies had (basically) the same title, "Ocean's 11"; the 2001 remake spawned sequels with similar titles, starting with "Ocean's 12." Each is a classic heist movie with a fine ensemble cast: every member of Ocean's crew has a talent, a task, and a moment to shine.

The buildup is thrilling and the payoff beautiful, even if the outcomes are rather different for the two bands.
4. If you trust folklore in the English-speaking world, you'll end up with an odd sense of zoology. According to legend, which of the following fictional characters should have nine lives?

It's housecats that supposedly have nine lives, which would give them a terribly unfair advantage against mice! The tale arises from cats' observed ability to walk away unscathed from perilous situations, like falls from a great height. A taleteller watching Garfield, the eponymous orange tabby of Jim Davis's newspaper comic strip, would certainly tell a different story. Garfield doesn't do anything more dangerous than sleeping and eating lasagna!
5. In Orson Scott Card's "Alvin Maker" series, the title character is born with an unusually expansive set of magical abilities, or "knacks" -- all because of an odd number. Why is Alvin so powerful?

The first book in the series, "Seventh Son" (1987), tells the dramatic tale of Alvin's birth and early childhood. In a version of 19th-century America where people's knacks reflect their magical abilities, Alvin's family attempts a dangerous river crossing during his mother's labor with him. Alvin's oldest brother ends up sacrificing his life to save them, but hangs on long enough for Alvin to be born the seventh son. Later, another seventh son is born -- Calvin, the seventh living son -- and the conflict between these magical brothers drives much of the series to come.

The idea that the seventh son of a seventh son has special powers was not invented by Card; it's a fairly common notion in folklore.
6. In 1976, ABBA asked its fans to "see that girl." They were looking at the "Dancing Queen," muse of one of ABBA's biggest hits. Just how old is the dancing queen again?

Or, as ABBA put it, "young and sweet, only seventeen." Partly thanks to aspirational teenagers, this catchy tune was a tremendous success for the Swedish group, waltzing to the top of charts as diverse as the Australian Singles Chart and the US Billboard Hot 100, and earning a gold certification in both the UK and the US. To paraphrase the lyrics, "[They] can dance, [they] can jive, having the time of [their lives]."
7. My mind's a blank: I just can't think of any more odd numbers! Which of these is a way I could get a new odd number?

Multiplying two odd numbers, however, will get you an odd number every time. Think of 1x3=3, or 5x11=55, or 7x7=49. No factors of two go in, so no factors of two go out!
8. To understand chemistry, you've got to know the numbers. Which of the following elements has an odd atomic number?

The atomic number of an element is the number of protons in its nucleus; it's also, therefore, the number of electrons that orbit that nucleus in an electrically neutral atom. At its most fundamental, chemistry is governed by the way atoms gain, lose, or share electrons in interacting with each other.

Hydrogen, the first element in the periodic table, has an atomic number of 1. Orbiting electrons prefer to be in pairs, so this makes hydrogen very reactive. Helium (2), neon (10), and argon (18) are noble gases, found in the rightmost column of the periodic table. Not only are their electrons paired, but in the ground state, those pairs also fill up the successive available orbitals exactly. Since their electron configurations are complete, these elements are typically very unlikely to participate in chemical reactions.
9. You might think it difficult to keep track of the various "Star Trek" movies; after all, there were ten of them even before the 2009 reboot. Luckily, fans have a rule of thumb: the odds are terrible, so you should only watch the even-numbered films. Which movie, widely considered the worst of the lot, features the hijacking of the Enterprise by Spock's half-brother on a quest to find God at the center of the galaxy?

I can't really bear to say much more about this execrable 1989 movie, which was directed by William Shatner (best known as Captain Kirk). I will give you this general advice: it is a bad, bad idea for a space western to focus on a literal, physical search for God. It is a much, much worse idea for the characters to actually find anything at the end. In the movie's defense, however, the camping scenes at the beginning were okay.

In my opinion, which is infallible on this subject, the "Next Generation" movie "Star Trek IX: Insurrection" (1998) gives "Star Trek V" real competition for its shameful ranking, as does "Star Trek X: Nemesis" (2002), which I hope never again to be reminded of. "Star Trek III: The Search for Spock" (1984) and "Star Trek VII: Generations" (1994) are passable bridge movies, which may be watched as part of the sequence but probably won't be re-watched on their own merits.
10. Take a group of innocent American schoolchildren on a long bus trip, and they're likely to start singing about alcohol. In the repetitive but enduring song, how many bottles of beer are on the wall, before the first time you "take one down, pass it around"?

And the verses repeat, with one less bottle of beer on the wall each time. Wikipedia claims that it takes about half an hour to sing all the way down to zero; I categorically refuse to test this claim, or whether it includes pauses for pleas and/or threats from annoyed adults. In teetotaling circles, children may replace the beer with bottles of milk or Coke, reducing the tempting subversion of the song.
Source: Author CellarDoor 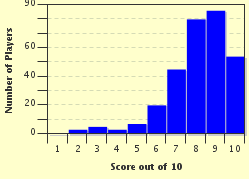